Frogdice, developer of ReignMaker, Stash, Dungeon of Elements and more is back with a new Kickstarter campaign for their genre bending game ReignMaker 2.

With a low goal of £799, they've already crossed the finishing line and then some with over £3K pledged so it looks like it's good to go. They're planning Linux support like with their past games, so we should see it sometime around April next year. 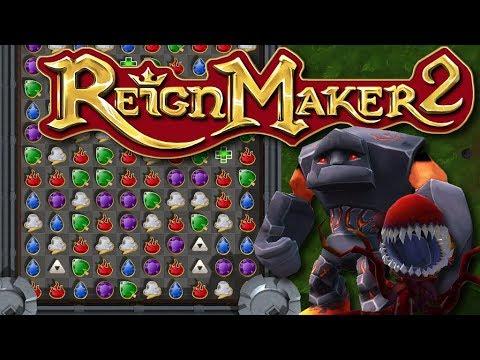 The game itself does seem quite interesting. The combat section involves the Match-3 mechanics, with you matching up five different basic tiles to fire bolts of elemental force at the approaching enemies. On top of that, it's blends in some city building where you will research spells, recruit troops and so on. For a matching game, it has certainly piqued my interest.

Compared with the original game, it sounds like it's going to be a pretty big upgrade. It will have optional online features, new spells, new gear, new troops, a story to follow along and a lot more.

Mountain Man 13 Dec, 2018
View PC info
Reminds me of Puzzle Quest 2, which is not a bad thing because that's a terrific game, but I've always enjoyed these kinds of games better on a mobile platform (such as Puzzle Quest 2 on the Nintendo DS).
0 Likes

Quoting: Mountain ManReminds me of Puzzle Quest 2, which is not a bad thing because that's a terrific game, but I've always enjoyed these kinds of games better on a mobile platform (such as Puzzle Quest 2 on the Nintendo DS).

isn't that the one that took the Warlords (Battlecry) theme at one point apropo of nowhere ?
0 Likes

View PC info
Nice idea for a game, but sooner or later, there are no match-3s available:><:. I haven't faced that extreme frustration since.


Last edited by oldrocker99 on 16 December 2018 at 4:55 pm UTC
0 Likes
While you're here, please consider supporting GamingOnLinux on: