Cities: Skylines updated, a great time to pick it up with the newer Industries DLC

Cities: Skylines just received a nice update as a little surprised adding in some nice new content and fixing a lot of issues. Everyone has a few bug fixes to the main game, as well as a free Winter Festival Market landmark.

On top of that the Industries, ParkLife and Green Cities, After Dark, Snowfall and the free Carols, Candles and Candy DLC all have plenty of bug fixes. The Industries DLC specifically had quite a lot of bugs fixed with it, so hopefully some of the people who were having issues will have a better time with it.

The Snowfall DLC also gained two new winter-themed maps named Winter Hills and Frozenshire so the value of it went up a little. Although for maps, there are tons available in the Steam Workshop (tens of thousands in fact) so I'm not entirely sure just how interesting new maps will be for owners already making use of mods.

I never did get around to reviewing the Industries DLC personally, since the review code for it sadly came in quite a while after release. I do have to admit though, I've personally really liked all the additions from it. While there was already quite a lot to do, the Industries nicely rounds out the game. There's a lot more to it than the description would have you think, it's easily the single most interesting DLC to date for it and absolutely worth the purchase.

A little tip: I suggest you check out the Clouds & Fog Toggler mod, as the distance fog is incredibly annoying and seems to cover up the visuals of the game far too much. This mod allows you to disable that and more, for a much nicer looking game. Here's an example: 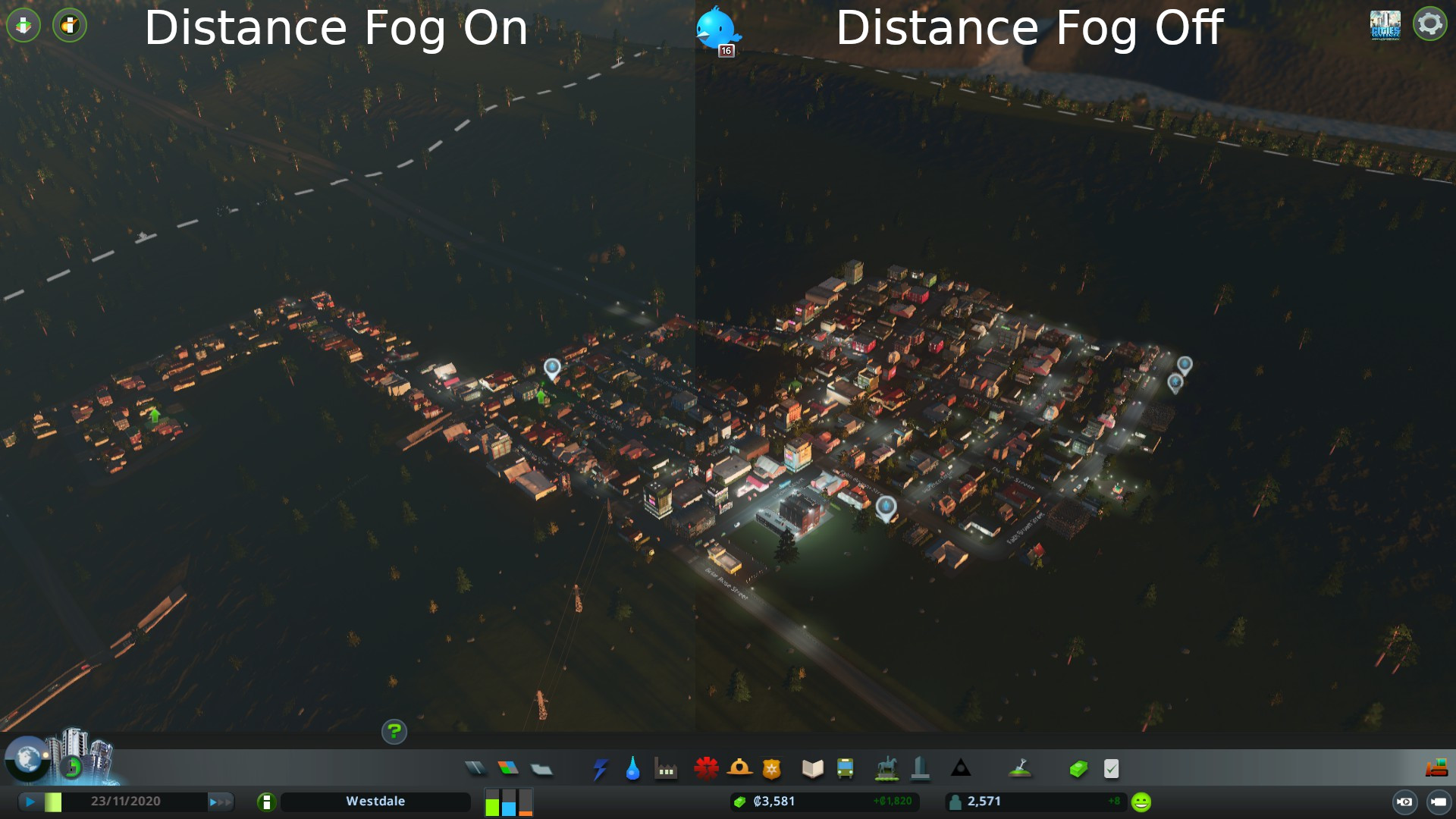 It might not look like much there, but you can still clearly see the difference. Personally, I hate it and it times it's really quite intrusive, sometimes it's so harsh you can hardly see on certain maps. The mod to disable it just makes it look so much nicer. Other than that, I don't have many issues with the game.

It remains as the biggest and best city builder available for Linux, even without a single DLC. Performance has certainly improved since the initial release too, much better in all areas. I do have to wonder, will another city builder ever topple it? Going to be hard for anyone to I think.

You can grab Cities: Skylines and whatever DLC takes your fancy on Humble Store and Steam.

View PC info
Cities is pretty close to perfect. The only thing they need to look into at this point is performance, as you still cannot build very large cities without them starting to lag fairly significantly and taking ages to load. And a few things mods currently do could be integrated into the main game. But that's really it. I don't think any other studio ever needs to try making a better city builder, either. Certainly not EA. Haha! I wish they'd tackle The Sims next and show EA how a people simulator is done!
4 Likes, Who?

Quoting: KimyrielleThe only thing they need to look into at this point is performance, as you still cannot build very large cities without them starting to lag fairly significantly and taking ages to load.

I have cities I built back when it came out that I can no longer load. Having to significantly upgrade your hardware (and it's not as if I haven't upgraded at all) to continue playing the same game isn't really on.

But yes, that aside, at its core it's about as close to the perfect city builder as there's ever been.
0 Likes

View PC info
Cities is the reason to update mem from 16 to 32GB in my actual config. I was not able to load old savegames along with hundreds of mods i have subscribed to with only 16gb of ram.

Besides the performance topics it also lacks a a bit of economy (compared to e.g. sim city 3000) for me. But compared to SC4 it really is superior. I really enjoyed playing it.
0 Likes

Ketil 17 Dec, 2018
View PC info
Cities:Skylines is very fun sometimes, but at other times it is quite annoying. It has a lot of room for improvement, but it is very hard to get things right. I hate the automatic grid around curved roads so I usually zone around boring rectangular layouts instead. I don't like to have tiny 1x1 and 2x1 homes in a district of 4x4 houses. I would prefer to be able to place the grid myself close to, but not necessarily hugging the road.

I also dislike the way roads are constructed. I would like to control the lanes individually in some junctions. E.g. have the left lane go up, the middle lane straight, and the right lane tunnel down into the ground. I would also like to have much gentler curves when splitting or merging roads. The 45-degree angle requirement for splitting or merging is ridiculous. Adding an additional lane for 50-200m would be much nicer.

The game is going in the right direction though. The freeform parks are great, although a bit limited, and the industries are somewhat nice as well. The level up requirements for unlocking additional buildings aren't too nice though. Still, the idea is great, and I hope they make a similar DLCs for residential and commercial too. Like parks they shouldn't require a road to each building individually, but rather have zone specific "roads". Shopping districts should have plaza where people walk everywhere, allowing some goods deliveries along the shortest path from a road. Residential zones should have houses connected to footpaths and require designated garbage zones connected to roads for garbage trucks.
0 Likes

Bard 18 Dec, 2018
View PC info
It is the mods that make this game into a really good city builder in my opinion. It is very nice to see all the content that people have created for this game. It is amazing what can be done and how much effort some people put into their creations.

I set out to create a green car free city of the future. I had hoped that with the DLC Green cities it would be possible. I came a long way, but in the end, it isn't really possible in this game to create a city without cars and trucks. It was disappointing, but anyway, a small mod that added pedestrian crossings suddenly made bicycles much more popular and people started to use their bikes to get to work - it was a huge improvement imo. So the mods really can change the game for the better!

What I don't like with Paradox games in general is the overpriced DLC:s they produce. I would not mind it, if they added new content and charged a few euros for their effort, but when I have to pay like 15 euros to get Natural Disasters - which isn't that good anyway...
1 Likes, Who?
While you're here, please consider supporting GamingOnLinux on: