What's that, too many launchers or no easy way to manage GOG games on Linux? Lutris might solve this problem for you.

Giving you the ability to install and manage games from Steam, GOG, Humble Store, Emulators and more it's a pretty handy application to keep around. This latest release is mostly improving on existing features like downloading the default Wine version when not already available, preventing duplicated entries when importing games from a 3rd party, one search bar to rule them all, improved log handling performance, using your discrete GPU by default on compatible systems and more. 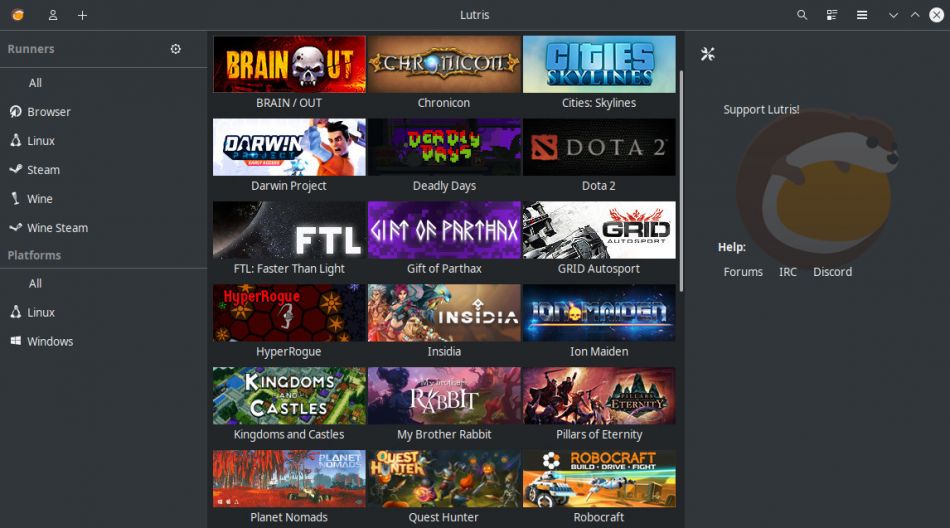 It also had another quick release 0.5.1.1 soon after to "add detection of custom proton builds in compatibilitytools.d folder" which is documented here, along with some bug fixes and adding of needed dependencies. Update: v0.5.1.2 was also pushed out, to fix some issues with "custom Proton detection preventing Wine games from running".

Find more on the official site or the GitHub. You can also support the development on their Patreon.

Have you been using Lutris, what are your thoughts? Do let us know in the comments. For me, it's been really great and has certainly saved me a lot of time.

View PC info
For Gog users, Lutris is now the "Gog Galaxy" client for Linux, just click install, for a Windows or Linux native game, and play. Lutris scripts system are very powerful to do more than just install a game: you can even install patch, write config file, download and install third party components, activate DXVK or override DLL... A must to have for Linux gamers.

Man they are really doing a great job over at Lutris! Can't really thank them enough.
2 Likes, Who?

Quoting: legluondunetFor Gog users, Lutris is now the "Gog Galaxy" client for Linux, just click install, for a Windows or Linux native game, and play. Lutris scripts system are very powerful to do more than just install a game: you can even install patch, write config file, download and install third party components, activate DXVK or override DLL... A must to have for Linux gamers.

i Like the Idea of it, but if i Import one of my GoG-Games, nothing happens...or am i missing something? ^^
For the rest of Lutris, you are absolutely right, it really set a new level of convenience to using wine.
Installed WoW again for the free Weekend - and it now really is less of a hazzle than on windows, as you don't have to go to the website anymore to download the client xD

RussianNeuroMancer 25 Mar, 2019
I tried to use Lutris a couple of times (Fallout 3, StarCraft II) in one case game doesn't start at all (turns out it's easier to setup Proton for Fallout 3) and in another there text rendering issues with Battle.net

RussianNeuroMancer 25 Mar, 2019
Also, I playing Prey on Proton right now, and find that eventually game starting to crash, corrupt save files and stuff. Somehow, disabling esync OR increasing DefaultLimitNOFILE doesn't help - for some reason, only doing both (second advice here) help me get rid of crashes and corrupted save files.

As we can see, there is four installation scripts and no workarounds for crashes. I'm afraid there is many games left in such semi-working state in Lutris database.
0 Likes

Quoting: tonyrhNice, but the huge right panel thing is redundant and ugly :/

I think there is an option to hide/unhide it.
2 Likes, Who?

View PC info
I really don't understand how all this GoG stuff on Lutris even works. Everything I already had installed is just seen by Lutris as a regular Linux game with no real connection to GoG (even though they all get put in a "GoG Games" folder). Is it supposed to separate them out the way it does with Steam games?

So in any case, I figured let's try uninstalling a game and re-installing it to see if that works. I picked Eschalon: Book I since it's a pretty quick download. It says it's available, so I hit the install button, only to get an error message saying that no installer exists. So I guess I have to install manually anyway? I have no idea, all it gives me is the dialogue for adding a generic already-installed Linux game. So...maybe? I do know that now there's a grayed-out entry for it in the area that should only be installed games and I don't know how to remove it (Does "remove from library" remove it altogether? It's unclear.).

Maybe it's wiser I don't bother with that at all. It seems intimidating and easily broken to me.
1 Likes, Who?

View PC info
I have not figured out how GOG is integrated at all. Do I still have to go to the webpage to install anything? I installed GOG Galaxy, but that didn't seem to really work, so maybe that's just a lost cause. From reading about 0.5 before I got it, I thought I would point lutris to my GOG library somehow, so I could install anything there through the client, but I guess that's not it.
2 Likes, Who?

View PC info
Honestly because of GoL I've learned of both Lutris and Gamehub, and have tried both several times -- allowing for updates and such. And to be honest, both of them struggle pretty hard compared to say, Playnite on windows.

Lutris I found to be very confusing to set up, way too much abstraction in the interface -- I just love "simple" interfaces that I don't understand (or not). I never got this working on my previous version of Mint, with dependency issues from the built version and...dependency issues from trying to compile it myself. On the latest mint it started without issue, but then I ran into issues importing large libraries -- which weren't issues at all, apparently, you just had to "know" to wait a longish time. When it announced GoG support I was super interested, until I realized it had to have gog-specific installers written which was not obvious -- I was just confused about why the option wasn't appearing for some of the games in my library. I don't mind contributing to projects, but I was frustrated enough with it that I honestly just walked away.

Gamehub I had similar but different issues with. It imported my steam and humble games fine, but I had to use GDB to debug an issue that was causing the GOG import to segfault the client -- I'm going to submit the github issue, I swear (this was only yesterday!). That client was nearly unusable for me under a large library due to UI lag issues -- I assume that was related to my very large library (this might've been fixable with desktop/composite tweaks I suspect, though really those are work-arounds). I was unable to get Gamehub to recognize my installed Steam games, and my attempt at installing a GOG game with the client didn't go well either.

They're both good projects that I'll probably try again eventually, right now I personally wouldn't recommend them to non-tinkerers / people not interested in actively contributing to the projects via reports or direct contributions. I'm sure small libraries of probably-more-popular games might even work perfectly out of the box?

* For large library context, between Steam+GOG+Origin (only) my libraries add up to ~1600 give or take.
2 Likes, Who?
1/2»
While you're here, please consider supporting GamingOnLinux on: