After 7 years of development, the sandbox RPG 'Spoxel' is out with a unique spell creation system

Spoxel is a sandbox adventure RPG very much like Terraria with a different graphical style, complete with the little slimes hopping around and all. However, it does some interesting unique things too.

While a lot of games give you a level up system with some sort of skill/spell tree, that's not quite the case here. Instead, Spoxel will have you actually create spells and equipment and not just craft them in a basic way. You really can make some weird stuff and it's pretty amusing I will admit. The Spell system uses a Scratch-like interface, to drag and drop logic blocks to customize exactly what Spells will do so it's quite versatile. 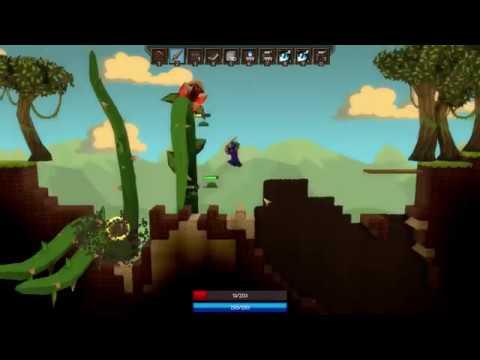 This customization isn't limited to making Spells either, as you also make your own weapons. You combine different materials to give them different looks, traits and abilities and so you can end up with some rather interesting equipment. The tutorial makes it quite fun too, giving you a taste of what to expect with a shark sword and a spell that fires chickens at enemies.

There's a lot of promise in this one for those who didn't like Terraria. I think this would be a little more suitable for a younger audience, not just adults too as it's a little more inviting and because it's quite a lot bigger it's easier to focus on too. Personally, I've actually been enjoying me adventuring in it and just messing about with the spell creation system.

While good, there's parts of it that do need sorting.

One thing I'm not particularly fond of, is the mining system. If you accidentally move the mouse just off a block while mining, it basically resets the block. I much prefer a more forgiving mining system, to give you a few seconds to finish mining blocks.

There's also the quest system, while helpful to get you going, it's so in your face when you complete a quest it's ridiculous. The notification is massive and right in the middle of the screen covering up the game, which is not good. Especially not when you're under attack, since you can't see. They really need to make that part of the UI better.

On Linux it does work nicely though, no real problems there although performance could be a little better. The launcher allows you to tweak some settings before getting into the game and fullscreen works great even with my two monitor setup which many games still fail on.

View PC info
So basically, it's a cross between Minecraft and Terraria; at least that's what it looks like to me.
0 Likes

View PC info
The regenerating blocks while mining sounds annoying enough to give me pause, but the big quest indicator in the center of the screen is a deal breaker. That just says, "Bad design," to me. Still, the spell/weapon customization system is very clever, and I enjoyed Starbound and Terraria enough to know that I can enjoy this sort of game. I'll keep an eye on Spoxel's progress.