Origami Flight is a side-scrolling shoot 'em up where you're literally playing as a paper aeroplane and you're trying to save the Origami World. 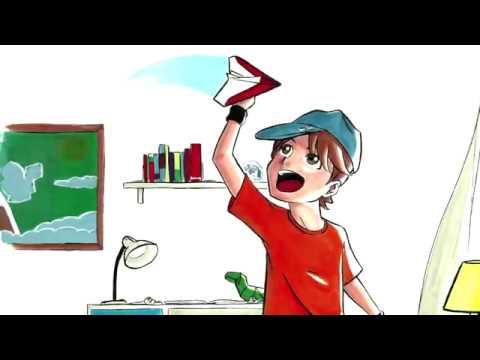 I will give it some points for trying to do something a little different here and different it certainly is. I mean, how many shoot 'em ups have a flying T-Rex made out of paper? Not many I imagine.

It has a nice variety to the enemies, different weapons to pick up which all act differently and have a different special power-attack when you charge them up. So in terms of actual style and basic mechanics or the game, it's lovely.

However, while it has a welcoming style and the idea of it is great, it does have a few problems. Firstly, it's a little slow. For a shoot 'em up you generally expect them to be quite fast-paced but Origami Flight feels too slow. There's a little too much waiting around for me. Not just that, the game is just far too easy for me. A lot of the time I could just constantly press the shoot button, fly around a tiny bit to dodge the odd bullet and progress easily. It's short too, in 15 minutes I was half-way through it there's just not enough of it for the price.

Probably a good choice to introduce a younger audience to the side-scrolling shoot 'em up genre but not good enough for anyone even somewhat skilful at such games. If it had more levels and more difficulty I would have liked it more.

You can find Origami Flight on Steam.

I am the owner of GamingOnLinux. After discovering Linux back in the days of Mandrake in 2003, I constantly came back to check on the progress of Linux until Ubuntu appeared on the scene and it helped me to really love it. You can reach me easily by emailing GamingOnLinux directly.
See more from me
Some you may have missed, popular articles from the last month:
The comments on this article are closed.
3 comments
Klaus 16 Apr, 2019
View PC info
Another target group: People like me, who play to relax. Work has enough challenge, I'm very much interested into not-challenging games sometimes.

Heck, during my master thesis I spent some weaks just digging a large hole in minecraft XD
2 Likes, Who?

Quoting: liamdaweProbably a good choice to introduce a younger audience to the side-scrolling shoot 'em up genre but not good enough for anyone even somewhat skilful at such games.


I think one problem shooters have is that "somewhat skillful at such games" seems to be the base for them. There's no entry level at all, you just need to already be good somehow (or willing to put up with a lot of frustration) in order to play them in the first place. This would be a good shooter for people like me who simply aren't good at frantic shooters.
2 Likes, Who?

Quoting: NezchanI think one problem shooters have is that "somewhat skillful at such games" seems to be the base for them. There's no entry level at all, you just need to already be good somehow (or willing to put up with a lot of frustration) in order to play them in the first place.

This seems to be a legacy from the 80s. With the memory limitations of the time, these autoscrolling games couldn't really have more than about 20-30 minutes of actual level. So they couldn't really have you blow through that in one go. Seems like modern shmups have changed little in that regard.
0 Likes
While you're here, please consider supporting GamingOnLinux on: