Terraforming isn't the only thing coming to Surviving Mars, you will also be breeding animals

Paradox Interactive announced a number of things for Surviving Mars today! We have new details about upcoming expansions (yes, more than one) and a release date for them too.

Firstly, Surviving Mars: Green Planet, the one with the Terraforming will be launching May 16th. It was announced previously but now we actually have a date—hooray! However, they've also announced the Project Laika "content pack", which will allow you to put animals on the red planet which will launch at the same time.

They also haven a new feature breakdown video going over some elements of both: 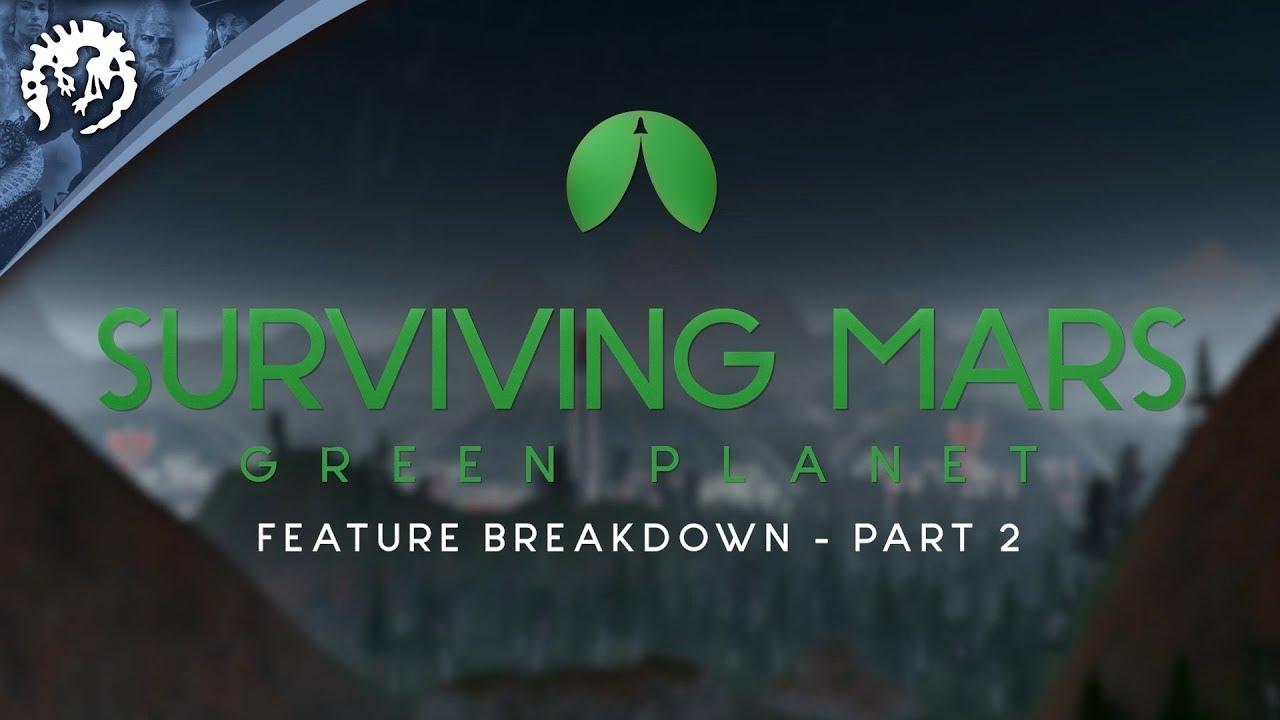 For an overview of what to expect for those who can't watch the video, see the details below.

Green Planet will include:

Project Laika will include:

Green Planet will be $19.99 at release and Project Laika will be $5.99, with Green Planet pre-orders now up but it seems you can only do so on the Paradox Store (not that we ever recommend pre-ordering anything!). The actual release will be across the usual stores like Humble Store, GOG and Steam on May 16th.

I'm incredibly happy to see Surviving Mars continue to expand, although it's a little odd to have two different packs come out at the same time like this. I'm assuming it's due to different teams working on different things and supporting games long-term does need funding, especially when it's bigger stuff like this. Personally, I think it all sounds pretty great.

View PC info
TBO animals would be a disaster, amazingly inefficient for food production, they would also eat all your plant food. We actually have synthetic alternatives even today for all that stuff which would no doubt be MUCH far along in development by the time we ever get to Mars :)

YES YES, I know its only a game, I just hope we don't get a generation of idiots thinking things like this are a good idea :/
1 Likes, Who?

It all depends on the circumstances. When space is limited, you are basically spending energy to replenish soil. When space is abundant, you can use animals for a similar thing.
0 Likes
TheRiddick 25 Apr, 2019

View PC info
Animals consume produce, and crap/fart allot. Now you can recycle that but you are left with a animal like cows eating ALL of your green produce, you won't be able to grow enough grass to feed them. Cows eat 100 pounds a day btw!

So compared to humans, they are insanely expensive to keep for the sake of some milk and maybe meat down the line :)

A case can be made for chickens however.

View PC info
Yeah your right I got the wrong figure. LOL way off, I thought ti was high. Anyway 25kg of dry matter, still allot when you could use that soil/land/space for growing food that can be consumed by humans directly. :)
0 Likes

But I need to repeat myself. If you want to use your current soil on max, you need to somehow pump stuff into it. Its common sense if you realize that by growing stuff and taking it away, you are essentially removing stuff from soil, as its not just carbon from air and energy from sun. So you need to use some fertilizers to return all those other elements into soil. Currently, we use fertilizers, which are mined from natural deposits (guano) or made chemically from minerals.

If you however have a lot of free land, you can use less space efficient method: crop rotation, leaving soil without produce to recuperate or making pasture on it. Depending on composition of your soil, you might not be able to even produce reasonable products without fertilizers, as the soil composition can be very poor on some elements. But you could still be able to have some sheep or cattle on it.

Given that cattle can take care of itself for most of the time, it might be an ideal thing to do ONCE planet is terraformed. Like in Firefly!

Don't also forget that plants do produce a lot of waste that us humans cannot metabolize. Thats why a lot of places had rabbits, chickens or pigs. It would go to waste anywhere and pre-processing in these animals can increase the rate of decomposition. Unless you have something else, like some bugs or worm farms.

Finally, this point is kind of bull anyway, game already has casinos, supermarkets, luxury stores, everyone lives in spacious housing with gardens, there are universities, office buildings and god knows what else. Non of these would be there during serious planet colonization anyway. So complaining about how pigs and cows are inefficient is kind of out of picture.

View PC info
Well in that case, yeah. I never really played the game and thought it was trying to simulate surviving colony on mars.. lol
1 Likes, Who?
Purple Library Guy 25 Apr, 2019
Efficiency is a tricky concept. Right now on earth, with a huge population and an agricultural system that relies on artificial fertilizer, our big limit is arable land, so you want to maximize food value per unit of land and we get lots of very sound arguments about reducing meat.
In medieval times, there was no outside source of fertilizer, the soil had to be enriched from within the agricultural cycle itself. And the population was generally much lower. Maximizing food per land unit wasn't such a big thing; what was efficient was maintaining the soil's fertility. So you'd see animals used partly for meat, partly to crap all over the land and fertilize it. Between that and crop rotation involving nitrogen-fixing plants you could fertilize the soil adequately.
Even so, when populations rose and the land got over-used, you'd see the mix move towards more plants and fewer animals (and soil heading for exhaustion). But then after the Black Death, with very low populations, the key limit was suddenly labour and there was plenty of land. At that point, what was efficient was often herds of sheep rambling around otherwise fallow land, because sheep herding required quite a bit of land but little labour.

So what's efficient depends what you're maximizing and what you have a shortage of.

On a new Mars colony you would have pretty much unlimited land, so animals being inefficient in land use wouldn't be an issue. But land is not topsoil, and you might not have a ready source of chemical fertilizers, in which case animals being efficient at pooping might be quite important. So having animals might be silly, but I don't think you can write them off too easily.
0 Likes

QuoteRight now on earth, with a huge population and an agricultural system that relies on artificial fertilizer, our big limit is arable land, so you want to maximize food value per unit of land and we get lots of very sound arguments about reducing meat.

You are wrong here. We got plenty of arable land. We are often building cities and factories on prime soil. At least in developed countries. Problem with undeveloped countries is, well, they are undeveloped. With that comes tonne of problems, like bad waste management, pollution, weak democracy and other stuff. Problem with the arable land that we currently have is its management, erosion and the fact that some agricultural methods are not sustainable, both with respect to nutrients in soil and water management.

So I disagree about reducing meat consumption being problem. There are huge efficiency problems that needs to be solved soon, like transporting food over vast distances or other stuff. Meat is marginal problem. And even then, the rotation of produce works on large scale as well, not just only on small farms in past. What do you think happens with low quality corn or grain that is unsuitable for human consumption? You could throw it away, or you could sell it with a discount to animal farms.
0 Likes
1/2»
While you're here, please consider supporting GamingOnLinux on: