Planet Nomads had my interest for a long time, as I sat hoping it would blossom into something special. Sadly, it released today and it has not. Disclosure: Key provided by the developer.

For starters, they went back on doing multiplayer so now it's a (rather lonely) single-player only experience. I could handle that, if they truly made Planet Nomads interesting enough with the story but it's just not. On top of that, they originally promised space-flight to go to other planets, that also didn't make it into the game. Basically, the game never actually got any of the really interesting ideas that were used to fund it in the first place on Kickstarter. 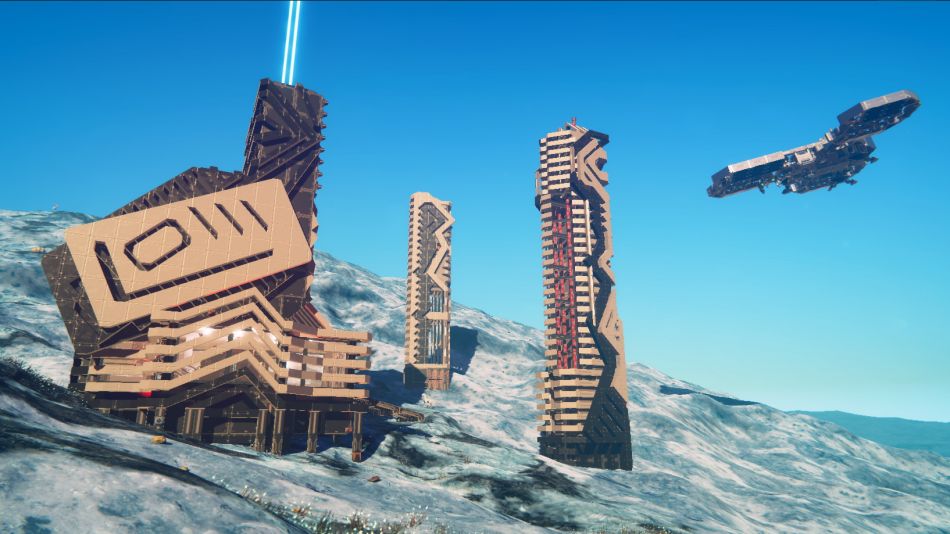 Honestly, at this point I don't know why anyone would pick up Planet Nomads, considering how dull it is overall. If you want a sci-fi sandbox survival themed game, No Man's Sky does almost everything better. At this point, I'm sure people who've played it are desperate to point out Planet Nomads has a block-based building system which is quite different. Yes, very true! But that doesn't actually make Planet Nomads interesting when there's many more games that also do this across different settings. Even on Linux, if you refuse to use Steam Play for No Man's Sky I still won't recommend Planet Nomads.

For those who would point out that I've previously said a few nice words about the game, that would be quite true. Some of that though, was in the hopes that it would continue to progress and not just leave Early Access like this.

Performance in the Linux version is also not good, at all! With model quality, shadow quality, texture quality all to low and basically everything else on low or turned off, it struggles badly to even remain at 40FPS often dipping well below.

The game is also very unstable. The first time I tried to save with the released version it just sat there. The entire game just got stuck, I tried to send an in-game bug report as the UI was still responsive and that also just got stuck and seemed to not do anything. I gave it long enough to finish doing both, making sure in case it was being slow and not a bug but 20 minutes later…yeah that's a problem. Naturally, I don't give up at the first sign of trouble, so I tried again. This time, the game spawned me in and I was stuck, I couldn't move my legs at all. Okay, fine, save and quit to menu…didn't work again. Now it won't even load a new game at all, which sounds much like this issue which I tracked down in the game before.

If you like playing by yourself, in a sci-fi setting and playing with a few blocks, making a vehicle or two you might enjoy a couple of hours on it. However, it gets stale very quickly and seems to be extremely unpolished and buggy on Linux. What a waste of potential.

View PC info
Pity. I never could quite bring myself to buy it in Early Access. I'm glad I waited.
0 Likes

patvdleer 3 May, 2019
View PC info
Thanks for the heads up, removed from wishlist.
0 Likes

Rooster 3 May, 2019
View PC info
It is much cheaper than No Man's Sky and it is Linux native so I would still consider buying it instead of NMS if it wasn't for the technical issues.

It can't be that much worse then NMS at release right? RIGHT?
1 Likes, Who?

Quoting: RoosterIt is much cheaper than No Man's Sky and it is Linux native so I would still consider buying it instead of NMS if it wasn't for the technical issues.

It can't be that much worse then NMS at release right? RIGHT?

Cheaper...for a reason. Native sure but that doesn't make anything good. Even without technical issues, it's just a shell.

NMS really wasn't as bad as people claim at release.
2 Likes, Who?

View PC info
The original kickstarter for this was based on a builder demo. And in its current state, that still seems to be the only thing that people really do with it. Half the screenshots on the Steam page show pictures from backers that have built the craziest things, but the survival game just never really matured. So the creative mode is probably the only thing that really does something well.

If you can get through the performance issues that is (which are not really Linux specific). Building anything quickly drops fps and will bring the beefiest machines to its knees. The "starting ship tutorial" thing demonstrates how badly the game manages to optimise the custom built structures. From you starting location in a closed room, you can look in one direction and have 60 fps, while looking in the other direction drops it to 10 fps or lower even though the same amount of geometry is visible. Since the whole area is built using the same building blocks, it shows that the game is unable to do proper occlusion culling of custom built structures. Which I imagine is incredibly hard to do, but also quite essential.

Looks like they drowned in the technical details and never got around to really make an interesting game. As Liam said, a lot of wasted potential.

With them just sticking 1.0 onto the game weeks before the planned release, I suspect they're out of money. That probably means a bunch of devs will be out of a job.
9 Likes, Who?

View PC info
Yeah I opened several issues for Linux complaining about the performance. I once got a development build to test (which was at that point a good progress in terms performance) but the following releases had the same bad performance like before.
Also -force-vulkan did not change anything in performance.

I spend a lot of time investigating this issue and found out that at a fresh start everything is ok, GPU utilization at 97% (GTX 1080) and around 80 - 90 fps on high settings. But it's slowly dropping until you reach the very bottom of 20 - 40 fps. Saving and restarting the game will temporary fix it but only for a few minutes.

So the problem mus lie somewhere in the middle ware or in their AI system or maybe in their physic system at calculating the collision surface of the maps itself. Because if you move around very quickly like in a vehicle the performance will drop even faster.

As I started playing the game this was not the case. somewhere at the 0.9.x and first noticed performance issues with 0.9.2.1 and the funny thing is in the patch notes they said "Fixed performance issues" I think that only applies for the windows build because afterwards it was getting worse.

I also did an Let's Play on the game but quit it because of performance and headache I was getting by lagging around with 20fps and below.

Sad to read that this seems not to be fixed but I did not checked the latest experimental build yet.

I measured the hardware utilization with conky for those who are interested in doing so :D

View PC info
Ah, this is a bummer. I was watching this one to hopefully get it instead of NMS. I still haven't (intentionally) purchased a game that is only playable via Proton, but I might someday. There are a few games I play via Proton that I purchased when I ran Windows and they work really well for the most part.

View PC info
I strongly disagree about recommending NMS instead of Planet Nomads.

Having played both, I can tell you Planet Nomads is way more interesting than NMS.
NMS gets dull very quickly because every planet and every solar system feels so generic (the exactly identical space station interior doesn't really help with that).

The building and discovery is much better in Planet Nomads, provided you have some creativity and like building and optimizing things.

Unfortunately, I must admit that Planet Nomads is plagued by performance problems that probably stem from their database storage (sqlite). This is what made me stop playing, but I still got 140hours out of it so can't complain.
And I will probably try to revisit it and check if performance is better (especially when I'll have my shiny new Ryzen 3000 series cpu :P)
2 Likes, Who?

View PC info
A good Linux alternative to this then might be Planet Explorers. It was a tad buggy, but it was fun to play with friends and progress through the story line.
3 Likes, Who?
1/4»
While you're here, please consider supporting GamingOnLinux on: