A look over the ProtonDB reports for May 2019, over 5,000 Windows games reported working on Linux

ProtonDB, the unofficial tracker for checking the status of Windows games played on Linux through Steam Play has another data-dump available. Here's a look for May 2019. We seem to have also reached a new milestone lately, with well over 5,000 Windows games reported to work.

That 5K (5,200 exactly at time of writing) should be taken with a pinch of salt of course, as plenty of titles have only a few reports and as with anything generated by user submitted reports the accuracy of them will vary but it's still very impressive overall. 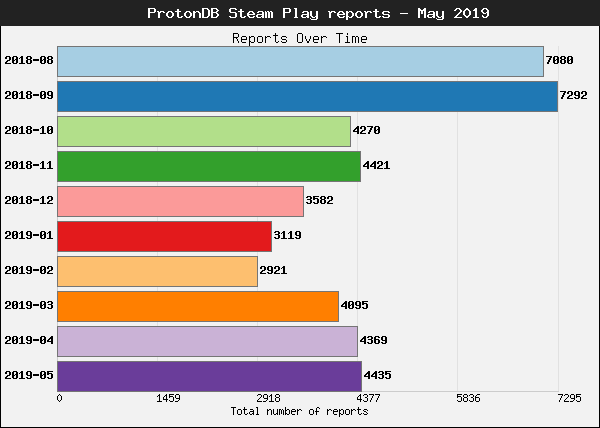 To break those numbers down into something that's actually more useful, during May what rating where those reports getting? A lot of them Platinum, although quite a number of them also giving a Borked rating meaning the games tested simply didn't work.

What will be interesting to see is how the amount of Borked reports changes over time, something I will likely take a look at during next month for the June reports. Could be interesting to see given how the many Steam Play/Proton updates should bring better compatibility over time even with newly released games.

Of those reports above, what titles were people testing across May and submitting? Let's take a look: 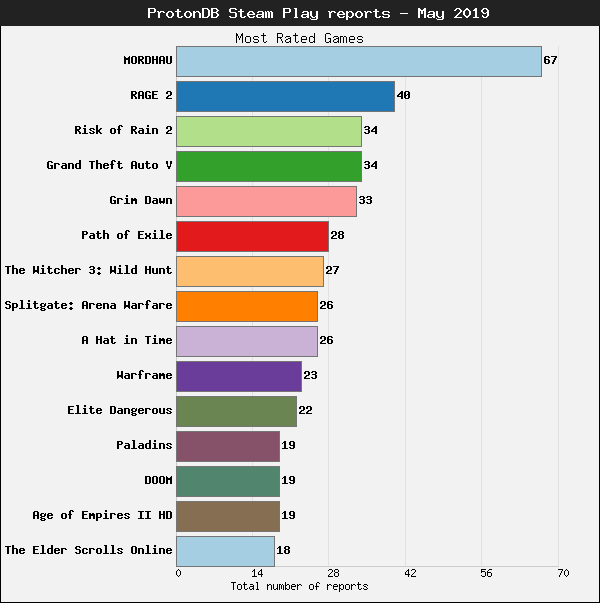 The top two titles reported in May were MORDHAU released at the end of April and RAGE 2 released in the middle of May. If you remember, Valve/CodeWeavers actually put out a same-day Steam Play update to fix RAGE 2 which is impressive. Hopefully we will see more of that for big releases, I imagine the Halo games coming to Steam will see some attention quickly if they don't work at release.

Imagine being able to play Halo the day or week it releases on Steam, on a Linux machine. That thought both amuses and excites me.

How many of those reported were rated as Platinum? 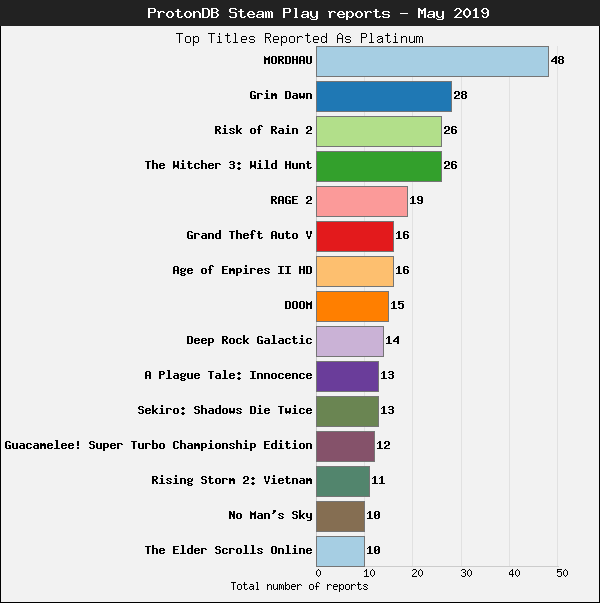 Grim Dawn showing up isn't surprising, as Valve set it as free to play during the Spring Cleaning event. MORDHAU really does seem to popular, although with it being a multiplayer title I just hope all the people enjoying it don't end up seeing some ant-cheat problems in future. A Plague Tale: Innocence is another new one, released in the middle of May as well and considering how well it's being reviewed it's great to see people able to enjoy another brand new release on Linux.

And now for the usual breakdown of distributions people are using: 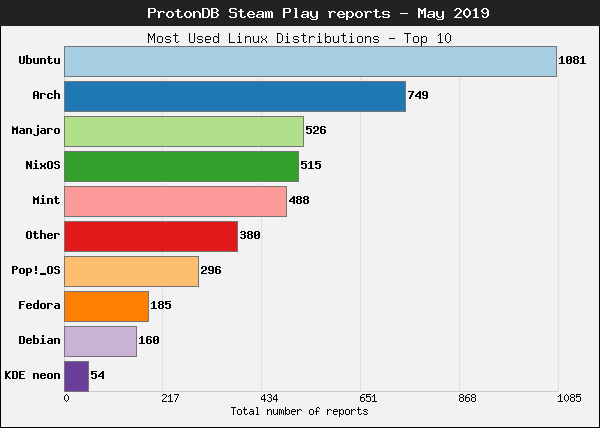 Finally, a little look at the GPU and CPU people have been reporting with:

Steam Play really does look like it's helpfully filling in the gaps for a lot of people. From being able to play various AAA games right at release, to enabling people to not lose access to their back catalogue of Steam games when switching to Linux (or testing the waters in a dual-boot) it's really great that Valve did this.

It's worth noting, that all of this is going on while Valve are yet to actually advertise the newer version of Steam Play on Steam directly. If you remember, Steam Play originally meant games that you purchased once to gain access to any build available (Windows/Mac/Linux) whereas now it's for running games through Proton. Valve also haven't updated the whitelist of titles since December last year, it will be very interesting to see just how far they wish to push it. Taking on compatibility for thousands of titles themselves (and with CodeWeavers help) is a tall order. On that note, I am trying to arrange an interview with Valve to get some more info about their plans, so stay tuned.

As a reminder, we also have a dedicated Steam Tracker Page to keep an eye on the Linux market share, languages and more. It has been updated with May's figures from Valve, showing the Linux market share for May at 0.84% which is an increase of around 3.7% based on April being at 0.81%. This is the highest it has been since September last year, so that's a positive sign showing a small upwards trend.

That's all for this month, see you again next month. You can find the ProtonDB data dumps yourself here on GitHub.

View PC info
Very tempted to make my second ever Steam Play purchase with A Plague Tale: Innocence. Still really uncertain about spending any money on a windows title though. Will probably hold off - still have plenty of native games to try out.
5 Likes, Who?

Quoting: scaineVery tempted to make my second ever Steam Play purchase with A Plague Tale: Innocence. Still really uncertain about spending any money on a windows title though. Will probably hold off - still have plenty of native games to try out.

Same here for me ! "A Plague Tale: Innocence" looks awesome :D
1 Likes, Who?

Quoting: scaineVery tempted to make my second ever Steam Play purchase with A Plague Tale: Innocence. Still really uncertain about spending any money on a windows title though. Will probably hold off - still have plenty of native games to try out.

I'm here to sign up for the Plague Tale club, very much wanting to take a look myself ^_^
3 Likes, Who?

View PC info
it's also interesting that there are not enough number of reports to get mentioned on this article about games that had a previous version that is a native port, seeing lots of reports of Shadow Of the tomb raider, Shadow of War or Dirt 2.0 would make sense. Maybe some ppl reporting were windows users not so long ago?? only the witcher series had a native port.

all of those games were big hits, (the previous iterations), had very positive reviews, and were very successful on Linux as well.

View PC info
Whoa, where did Nix OS come from? It's about to overtake Manjaro in reports. Are there a few hyper-reporting users or is Nix OS a distro on the meteoric rise and I just haven't been paying attention?

Quoting: iiariWhoa, where did Nix OS come from? It's about to overtake Manjaro in reports. Are there a few hyper-reporting users or is Nix OS a distro on the meteoric rise and I just haven't been paying attention?

It's likely a couple on it went on a mass reporting spree in the last month to make such an uptick.
0 Likes

I've been, and still to a certain degree are, a sceptic to the long term consequence of it. And while I still do believe this will have a negative effect on the number of actual ports being made, I've slowly started to realise that maybe that was too much to hope for anyway and that as a "second rate citizen" what we can realistically dream of is a well functioning Steam Play machinery.

At least for now, until we reach a significant share of desktop users. But we've been dreaming of the year of the Linux Desktop since the nineties, and that will likely happen after Half-Life 3 is released. Ergo... Don't hold our breaths.
2 Likes, Who?

View PC info
DXVK really did wonders, and now D9VK is about to fill another gap. Not counting the ridiculous DRM, there is not much else that is in the way of running just about any game on Linux. That and WMV playback. I wonder if Valve could pull off a deal of some sorts, and just license the damn thing?
2 Likes, Who?

Quoting: BeamboomBut we've been dreaming of the year of the Linux Desktop since the nineties, and that will likely happen after Half-Life 3 is released

Back on topic, went back to protondb.com, and it looks like provisionally something like 60% of all titles there are gold, platinum, or native. That's amazing.
1 Likes, Who?

Quoting: LinasNot counting the ridiculous DRM, there is not much else that is in the way of running just about any game on Linux.

.dotnet is still a problem, and anticheat is arguably a bigger problem than DRM (if you're not using those to mean the same thing), although Valve is working on anticheat solutions. Otherwise, store exclusive titles in the future like those of Epic are an issue too...