Kubifaktorium, a voxel colony management and automation game developed on Linux is now in Early Access

The second game developed by Mirko Seithe and made on Linux, Kubifaktorium, a voxel colony management and automation game is now available in Early Access. Note: Key provided by the developer.

Build, manage and grow a thriving settlement in Kubifaktorium, a voxel-based colony management and automation game. The game features multiple biomes to explore, plenty of resources to exploit, complex transport systems and automations to build and interesting production chains to master. 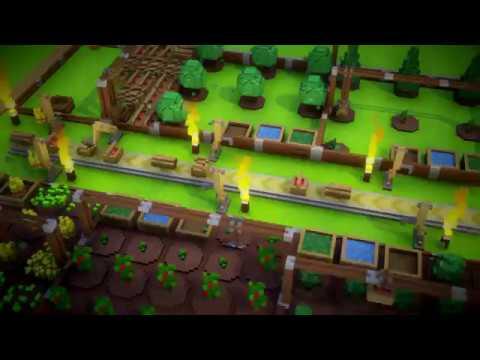 I've played a few hours of it and found it to be pretty interesting, it has quite a few tutorials that are recommended to go through and they do a good enough job at getting you started. Already reminds me somewhat of Settlers and other similar games, especially with the zone system with you needing to expand your zone to be able to build more. Has a really great concept, with a sweet blocky visual style and a great gameplay pace allowing you to play it as you please.

Seithe has some good plans in place for future updates including Steam Workshop modding support which they said will be "soon", along with an automated production system they say will be due around "Q4" this year and more biomes.

For the Early Access timing, they're planning to remain there for no more than two years like their previous game BossConstructor (which also supports Linux).

You can find Kubifaktorium on Steam and itch.io. If you're going to wishlist it on Steam to pick up later, do remember to set your platform so your wishlist entries show as being from a Linux player.

View PC info
Settlers was the first thing that came to me when I watched the vid. Then some Factorio. Not the worst games to be inspired by!
1 Likes, Who?

View PC info
I played through all the tutorials in the demo. I am really looking forward to release! How much gameplay is in the Early Access edition so far? Like, is there more than one location you can choose to play on, is there a save system? It sounds like there is a sandbox mode at the least, which would be a big difference than the demo.
0 Likes
Spirimint 7 Oct, 2019

Quoting: 14I played through all the tutorials in the demo. I am really looking forward to release! How much gameplay is in the Early Access edition so far? Like, is there more than one location you can choose to play on, is there a save system? It sounds like there is a sandbox mode at the least, which would be a big difference than the demo.

I'm playing it since a few days. It's very playable. Already mod support. There is a lot to do. Really can recommend it.
1 Likes, Who?
While you're here, please consider supporting GamingOnLinux on: