A three-way look at Rocket League on Linux, with D9VK versus Linux Native

After chatting on Twitter with a fellow Rocket League enthusiast about the performance of the game, I decided to take a look.

Rocket League originally released for Linux back in 2016, using an older build of Unreal Engine 3 with OpenGL as the renderer. With that in mind, it's one of the older major Linux ports available to us. Age is just a number though, it's a fantastic game. It's not perfect though and there's plenty of room for improvements.

To demonstrate this (and see how far D9VK has come), I've taken a look at it three different ways:

For reference: The testing was on an up to date Manjaro Linux install, using an NVIDIA 980ti and the 430.26 driver with an Intel i7-5960X. Results will obviously vary based on CPU/GPU and more.

The results are pretty surprising, using the same replay of a crowded 3v3 match on probably the most demanding map in the game at 1080p with all settings maxed out: 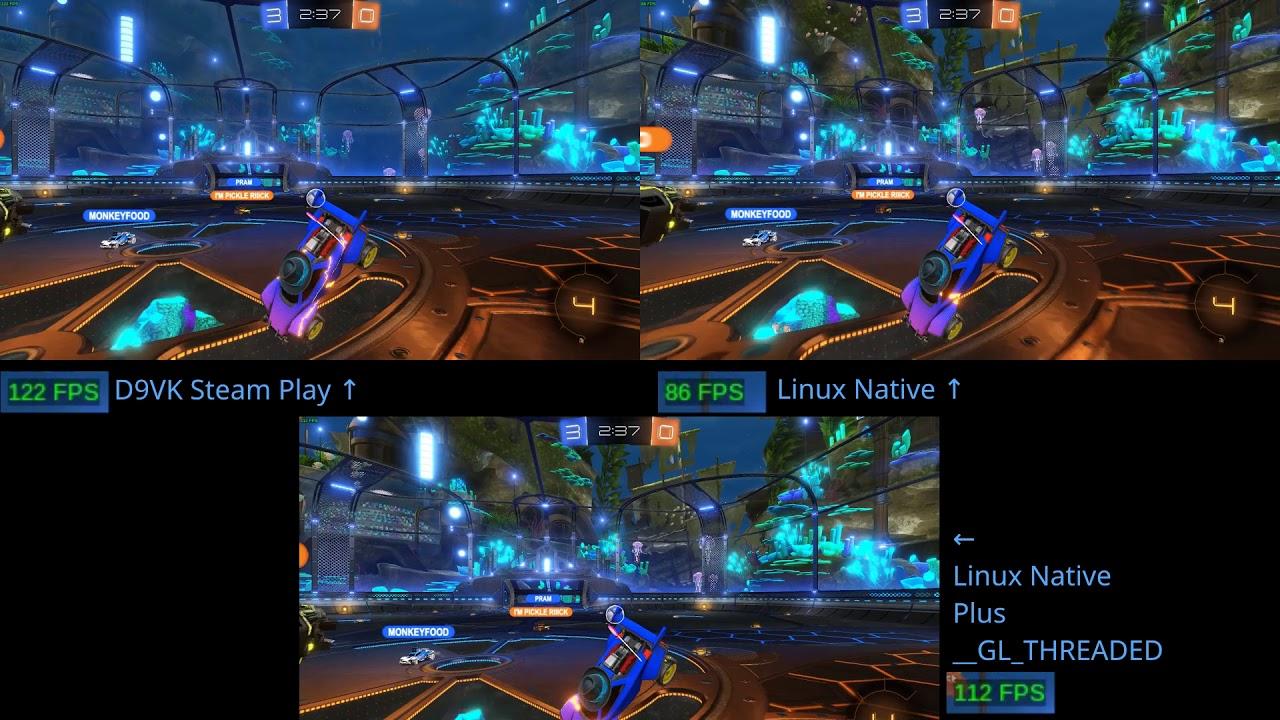 Note: This map does have one issue where the area outside the playing field is rendered differently. The Linux version is too bright and shows too much, the Windows version with Steam Play and D9VK version is much more correct.

As an additional measure, here's another video during a 2v2 match on a different map using the exact same testing method: 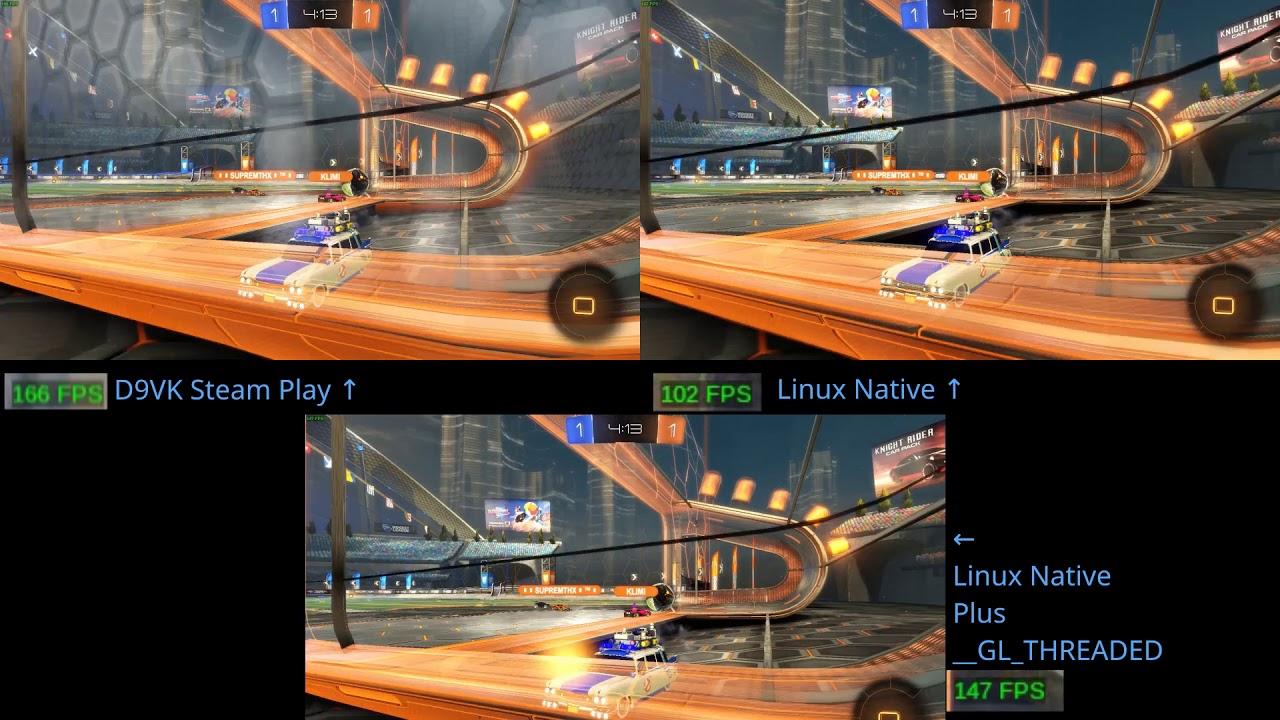 As we can see, without NVIDIA's threaded optimizations the Linux version comes in dead last easily in both videos. With it, performance is much closer and it's smoother but Steam Play with D9VK comes out on top in both. There's a few moments where the Linux native build with threaded OpenGL beats Steam Play with D9VK but not many. Impressive really, since D9VK is classed as "experimental" and likely has plenty more optimizations still left to be done before it's ready.

So what's the takeaway here?

Well, Rocket League on Linux can be enjoyed quite easily and Psyonix (the developer) should absolutely enable NVIDIA's threaded OpenGL optimizations on Linux. They don't even need to update the game, they can just add the launch option themselves by default. If you do have some performance issues, Steam Play can likely make the experience even smoother again. The biggest difference is hitching, with Steam Play the game remains a lot more fluid overall. This doesn't mean Steam Play is suddenly better than native games of course, it all depends on how the game was ported to Linux. To be clear, with Steam Play it has its own issues that I've not seen in the native Linux version. Sometimes with Steam Play the game will repeat bits of audio, crash and hard-lock my PC (rare but it happens).

Also we are comparing OpenGL to Vulkan, that alone can make a big difference depending on the implementation. It's all about the time spent on the Linux version, with Steam Play (as shown) clearly Linux is a gaming platform that can perform well (and in many cases threaded OpenGL does great too). With enough time and a bigger market share, developers would spend more time on their Linux ports. First we have to get there.

If you wish to join me in adoring Rocket League like a second child (it really is my #1 game), you may find it on Humble Store and Steam.

The article was updated after publishing with a second video and some wording adjustments.

View PC info
What I love about d9vk is even thought it's not mature yet, some titles like Left 4 Dead which hadn't been ported to Linux and didn't work with SteamPlay, work really well with d9vk. I haven't tried a recent build of Black Mesa, but the native port had been broken for some time. I've seen people playing it through d9vk flawlessly.

Great project, linux gaming goes from strength to strength. Back a couple of years ago, never thought I'd see the day when a compatibility layer was this good. Thanks to the hard work put into dxvk and now d9vk, amazing.

View PC info
Looks like the native version is pretty good. And I expect it starts faster and less chance of suddenly developing issues.

Is it different for AMD?
1 Likes, Who?

ZigZag 2 Aug, 2019
I just tried it with my RX580, Proton 4.11.1 and the launch command, and usually I play around 130-160fps, but with this setup I'm for the most part stuck at the max 250fps with it rarely dropping down on 230-240fps, so pretty nice improvement! :D The really big difference is how smooth it is to play like this, it is absolutely nuts!

View PC info
So, what other games would get improvements like this? All the OpenGL ones?
0 Likes

mylka 3 Aug, 2019
View PC info
am i the only one looking at the background?
D9VK shows absolutely nothing..... of course it is faster

just look at the 1 second..... its just dark... nothing to render
2 Likes, Who?
Grifter 3 Aug, 2019
I have a highly configured ini file (with a lot of graphics turned down low or off) and this way the native client (with no graphics) outperforms d9vk (with full graphics) for me, however when you turn up the graphics that's where d9vk really shines (quite literally, with all the graphics everything just shines way too much, how can anyone play like that? :p), it's really impressive how it could easily hold 144 frames constantly on my old hardware (i5 750, gtx980), where in native if you put everything on, I can barely get 60. I also get better performance in native with the old 390.87 driver compared to newer ones.

But I've never heard of opengl_threaded_optimizations before, when was it implemented, would it work in 390.87? Or does it require a newer driver?

View PC info
D9VK certainly doesn't work well with everything. Playing Angels Fall First, I saw no real difference in FPS with D9VK vs standard Proton/Wine compatibility, and some aspects of the game looked off and actually played off (a few keystrokes wouldn't work). Not perfect yet!
0 Likes

Quoting: mylkaam i the only one looking at the background?
D9VK shows absolutely nothing..... of course it is faster

That is actually how it is supposed to look. The D9VK version looks almost the same as it does on Windows. The Linux version is way too bright and has no fog apparently.

Edit: Added a second video to also compare, on a different map, along with some slight adjustments to the wording in places to accommodate it.

And nice work you did on this, Liam. All I ever wanted for Rocket League on Linux is to have some freaking AA. Going from Windoze to Linux it was just glaring, starting right in my face. NO AA. Took some time to get used to the looks of that...
0 Likes

Quoting: officerniceAnd nice work you did on this, Liam.

Thanks for the kind words!

Quoting: officerniceAll I ever wanted for Rocket League on Linux is to have some freaking AA. Going from Windoze to Linux it was just glaring, starting right in my face. NO AA. Took some time to get used to the looks of that...

Yeah, I'm honestly amazed they still haven't fixed AA in the Linux version after years.
1 Likes, Who?
1/6»
While you're here, please consider supporting GamingOnLinux on: