What's that? Another Steam Client Beta update? With a Linux platform filter? Yes it is

Valve have released the fourth Beta update for the Steam Client since the new Library design dropped and it's a good one.

When the new Steam Library released in Beta for everyone to try on September 17th, it came with a lot of fun new features. However, it also got rid of a few that were necessary. For starters, the option to view games only on Linux or MacOS were removed but today they return…and in style too!

For Linux, we now have this sweet little Tux icon to click and have all non-Linux games hidden. The position is a tiny bit off, but at least it exists again. However, if you've enabled Steam Play for all titles it does nothing, since you're opting to show them all of course. You can get around that with option Valve added some time ago to force Proton/Steam Play on games if you do wish to have a list filtered for Linux games (steps on doing that in this article).

Empty collections are now hidden from the game list too, so they don't take up space where not needed.

They also removed the handy Home and Collections buttons from the left menu, instead they now appear as Library menu options when you hover over. Personally, I liked the little buttons they had. I feel they could have kept them while also adding them as a hover menu but now we just have this: 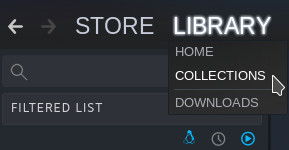 This is how the Steam Client looks now, just to show it off a bit for those not using the Beta: 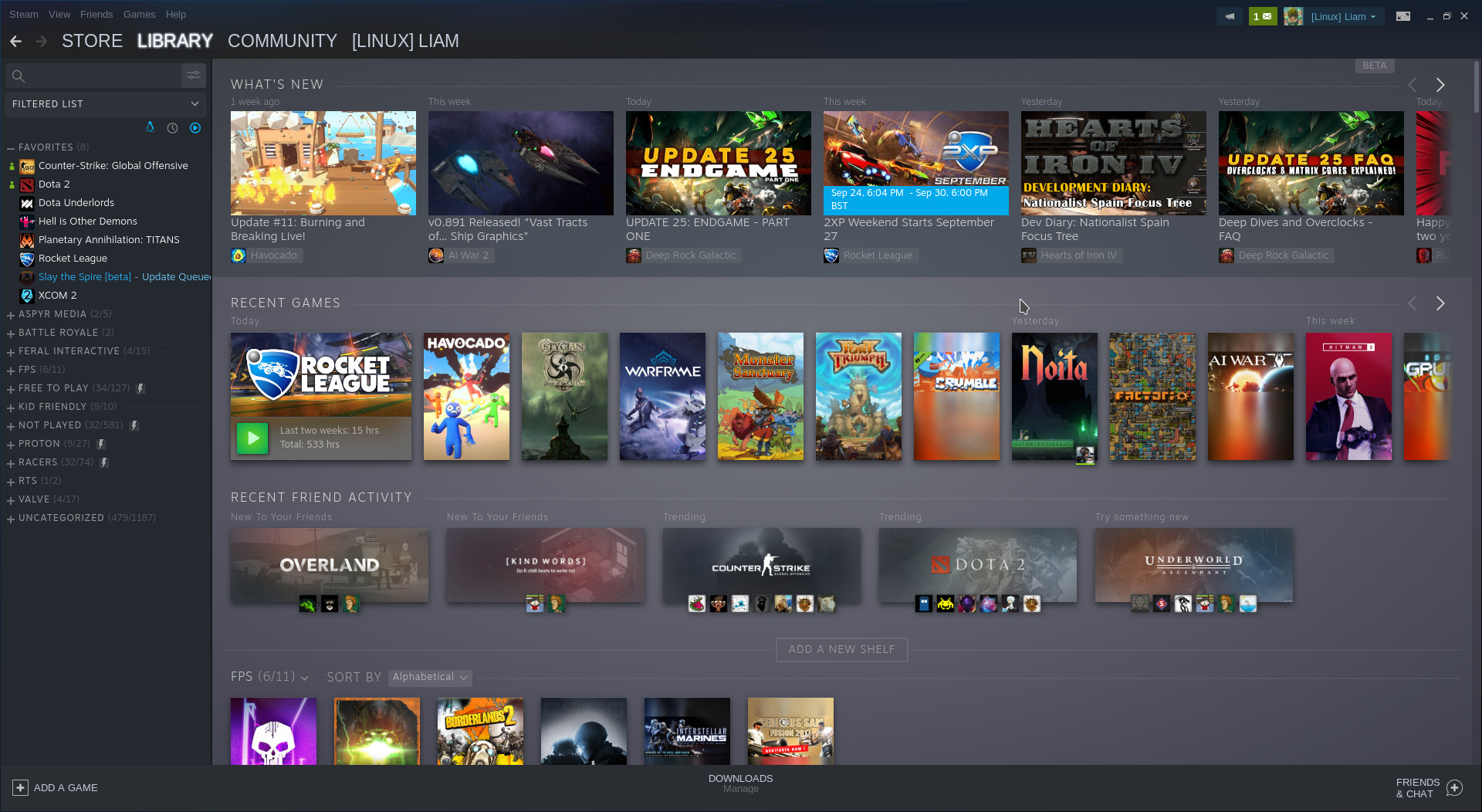 For Linux, they also claim to have fixed a GPU crash and overlay corruption issue "with games that use Vulkan async compute, such as DOOM 2016".

Remote Play got even more fixes on this round as well. Issues like latency and reduced frames due to host CPU load, launching VR games from the Steam Link, a rare Steam client crash when running the network test, support for "Wake on LAN" over wireless connections with properly configured wireless adapters and a fix for a steam client crash under certain combinations of remote play with non-Steam apps, or on the second launch of SteamVR.

Finally, Steam Input should also now have less of a hit on your CPU and several bugs with action set layer switching were solved.

View PC info
Nice. I was a bit afraid that the option to filter by OS was deliberately removed for some reason, but it seems they were at least willing to add it after they noticed we (and I think it was pretty much everyone that uses Linux) missed it. But I wish they did consider the official support even with SteamPlay though (not necessarily native-only, whitelisted games could show up as well).

I also liked the Home button a lot, while not strictly necessary it was very convenient. Hoping they bring it back in some form.

VodkaChicken 26 Sep, 2019
View PC info
I wish they add a way to easily see which version of proton a game is using and whether or not it has been whitelisted. That's the main thing I miss from the old library.
6 Likes, Who?

View PC info
Just curious, if you have Steam Play enabled for all titles does the beta version of the library still count EVERY game in your library as SteamOS/Linux? I find that really annoying in the current release version.
0 Likes

Yes. That is exactly what the option is designed to do.
1 Likes, Who?

pb 26 Sep, 2019
The home button will be missed. Also the "Linux filter" is useless for those who have SteamPlay enabled for all titles. I wish it could at least be configured to only show native titles.
5 Likes, Who?

Yes. That is exactly what the option is designed to do.

Although it is like that by design and that's how it functioned before these big updates, I still feel it would be useful to have a filter for games with Linux advertised on the store page. Even if it just gives an easy way to know that when a game gives issues it's something the developer should focus on, or it's just a Steam Play/Proton support issue
1 Likes, Who?

Quoting: VodkaChickenI wish they add a way to easily see which version of proton a game is using and whether or not it has been whitelisted. That's the main thing I miss from the old library.

I noticed there is now a "Scroll to Top" next to the "Filtered List" dropdown when you have scrolled down (or was it there before)? But even with that, it seems like there is room for the Linux / Recent / Ready to play icons on the same row, rather than having that dead space to the left of those icons.
0 Likes

You still can opt out...?
0 Likes
1/2»
While you're here, please consider supporting GamingOnLinux on: