Sky Racket is a brilliant and colourful mix of a shoot 'em up and a block breaker, out now

Sky Racket combines two styles of gameplay in such a fantastic way, with beautiful bright colours and feel like a classic Sega Mega Drive (Genesis) game. It's out today and it's a huge amount of fun. Note: Key provided by the developer.

They're calling it a Shmup Breaker, since it combines the side-scrolling action found in tons of classic shoot 'em ups with block breaking not too far from Breakout. It's so incredibly weird to see the two different styles put together like this, but it really does work. The colourful and cheery presentation is incredibly inviting too, couldn't help but smile at the cheesy retro-cartoon intro video. 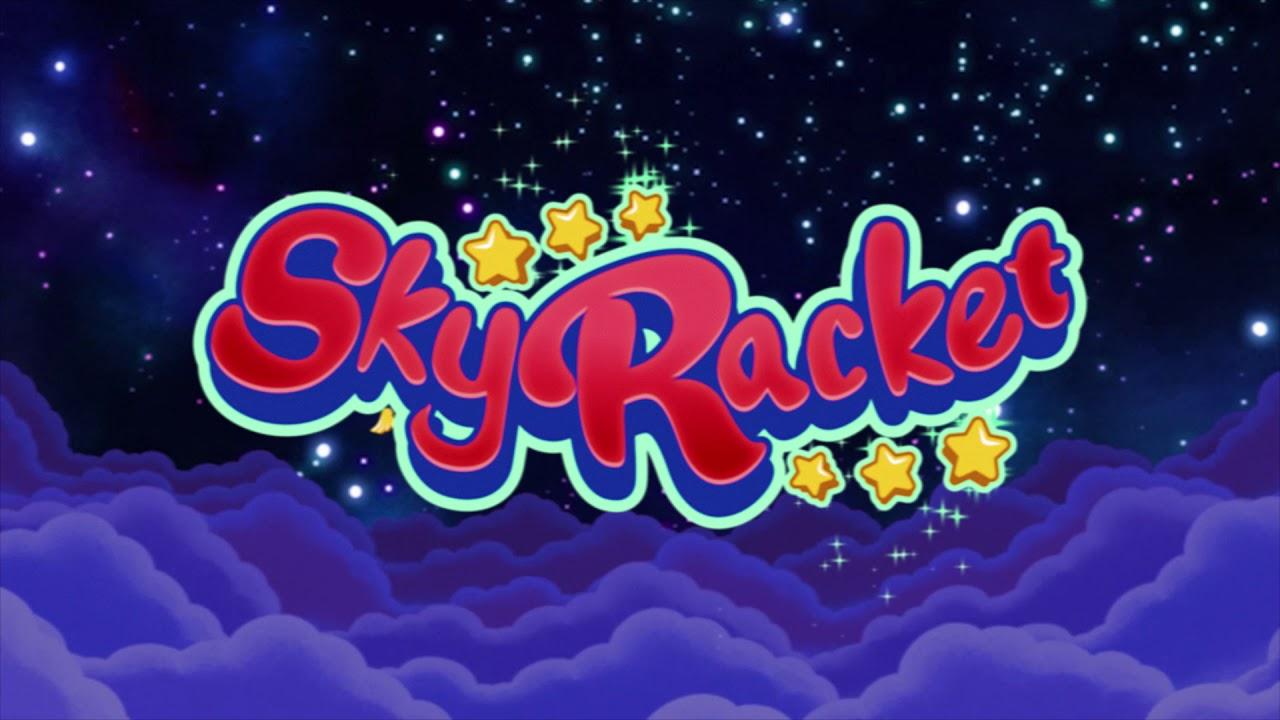 One of the key features of Sky Racket is how you don't have a weapon, only a tool. You have a magical laser Racket, which is basically a Tennis Racket that appears out of a handle a bit like a Lightsaber. Enemies shoot at you, so you serve it back to them with increased speed and power. You get to meet some little friends along the way, like a flying elephant head that can shoot every so often (which seemed optional, it gave me the choice of having them join me).

What's really caught me with Sky Racket is how damn satisfying it is to get a good rebound on enemy fire, to have it bounce furiously around the screen smashing blocks everywhere as it goes. It looks glorious! Sky Racket also adds in a little sprinkle of Bullet Hell too, especially with the boss battles. The first one, for example, has you face off against a giant angry Banana: 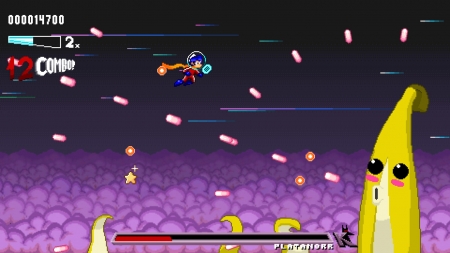 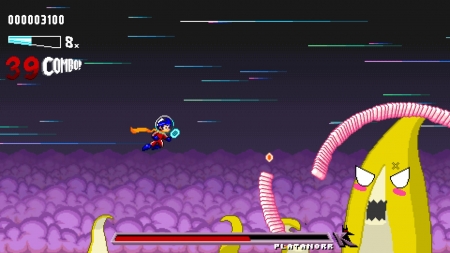 This is a fantastic example of how to do a retro-inspired game in modern times. Mix up the features, add a bunch of surprises with some on-point humour which hits that line just before weird becomes insane. The kind of strange where long, flying cat sandwiches open up to reveal a little turret inside.

Just look at this, at one point a bunch of furry little critters jumped on me and I had to wiggle them off. That's after a section where I was constantly dodging a barrage of critters falling from the sky, all wanting to hop on. I don't have even the slightest clue what's going on but it's stupidly charming. 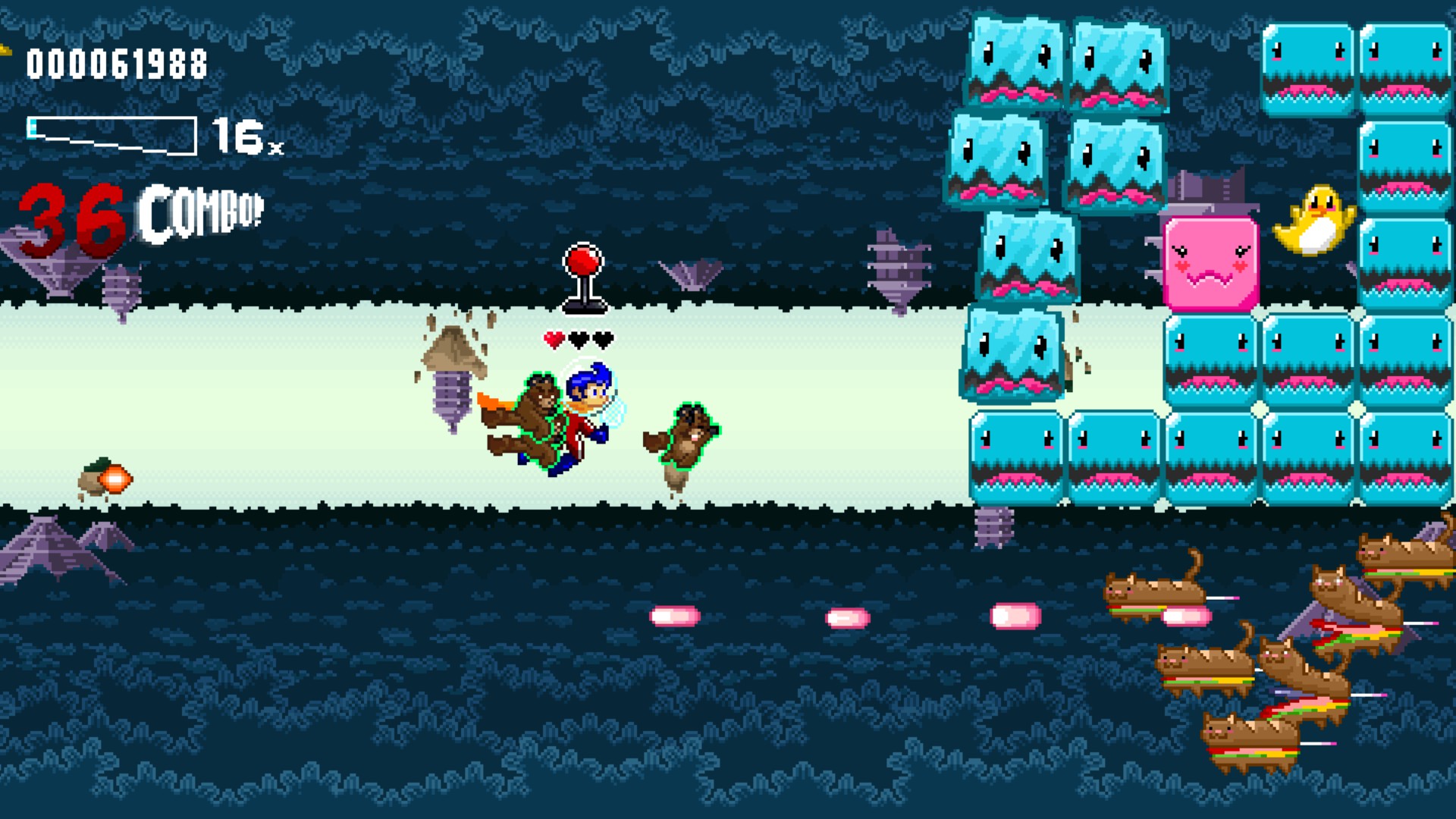 I will add, those same furry critters actually turn into grenades when you shake them off, for you to serve up a good shot right through a group of enemies in front of you. The earlier section where they're constantly dropping from the sky now makes a bit more sense. Luckily I got to re-try it after my utter failure at the hands of an extremely angry two-sided monkey thing, who fires big laser things out of their mouth which drops down spikes from above.

Look, nothing I say about this game is going to begin making sense, you just have to play it.

Since writing about the demo back in July, gamepad support on Linux seems to have improved with the button prompts properly showing up on the Steam Controller so it's been quite a smooth experience.

About the author - Liam Dawe
I am the owner of GamingOnLinux. After discovering Linux back in the days of Mandrake in 2003, I constantly came back to check on the progress of Linux until Ubuntu appeared on the scene and it helped me to really love it. You can reach me easily by emailing GamingOnLinux directly.
See more from me
Some you may have missed, popular articles from the last month:
The comments on this article are closed.
2 comments
Purple Library Guy 23 Oct, 2019
It's so cute! Nice to see something with a look that isn't bleak and dark and depressing. I mean, I have nothing against cynicism and post-apocalyptic angst, but sometimes it seems like that's all there is any more.
1 Likes, Who?

Quoting: Purple Library GuyIt's so cute! Nice to see something with a look that isn't bleak and dark and depressing. I mean, I have nothing against cynicism and post-apocalyptic angst, but sometimes it seems like that's all there is any more.

Sky Racket is nothing for me, but yes, some days you need something positive.
Bought A Short Hike for this yearning lately. (Didn't play it yet, though.)
0 Likes
While you're here, please consider supporting GamingOnLinux on: