Another update to Steam Play Proton has been released this evening, which should bring with it plenty of improvements for playing Windows games on Linux.

Don't know what any of that means? They're all the projects that work inside Proton to make it do what it does, they're all fresh versions meaning you should see wider support for games and probably performance improvements in places.

On top of that, they've tweaked the way Proton is distributed to use less disk space and be a smaller download size for future updates. Wine and other libraries had debug symbols stripped, however Proton itself is technically a Tool installed into Steam so now you can just select the "debug" beta on whatever Proton version to get them back. Do so like you would select a beta for a game, right click on it and go to Properties and then the beta tab.

For actual game support there's improvements for Rockstar Launcher and Grand Theft Auto 5, better gamepad support for Farming Simulator 19 and Resident Evil 2 and mouse input in Arma 3 is fixed apparently. The last noted game is DmC: Devil May Cry, which should now be playable.

Finally, their build system had a bit of an upgrade to allow easier redistribution of Proton builds between users which sounds fun.

On top of that, a recent update to the Steam Beta client also added back in the ability to actually see if a game is running with Steam Play. When on the page for a game, click the little I for the extra information and it's there, like this:

Also, I am not sure whether it is normal, but this proton update actually crashed me out of my Rocket League session with my friends so it could update. Is there an option to prevent proton from updating automatically while I am in a game that uses it?

Edit: Just an update on my issue with Rocket League: When I 'top' in the terminal, it appears RL is using 95-110% of my CPU (Ryzen 5 1600) while starting a game. Not sure what RL is doing to warrant such an extreme usage for a longer period of time (20+ seconds or longer until crash)
Edit2: Installing Proton 4.19-GE-1 fixes everything. Thanks @Strykai

Nope, not currently. Technically it would possible to implement it since Vulkan supports the necessary extensions, but it's not a priority for vkd3d devs at the moment.
1 Likes, Who?

Comandante Ñoñardo 9 Nov, 2019
View PC info
Any one else is having problems with Proton and the RTX 2060 SUPER? 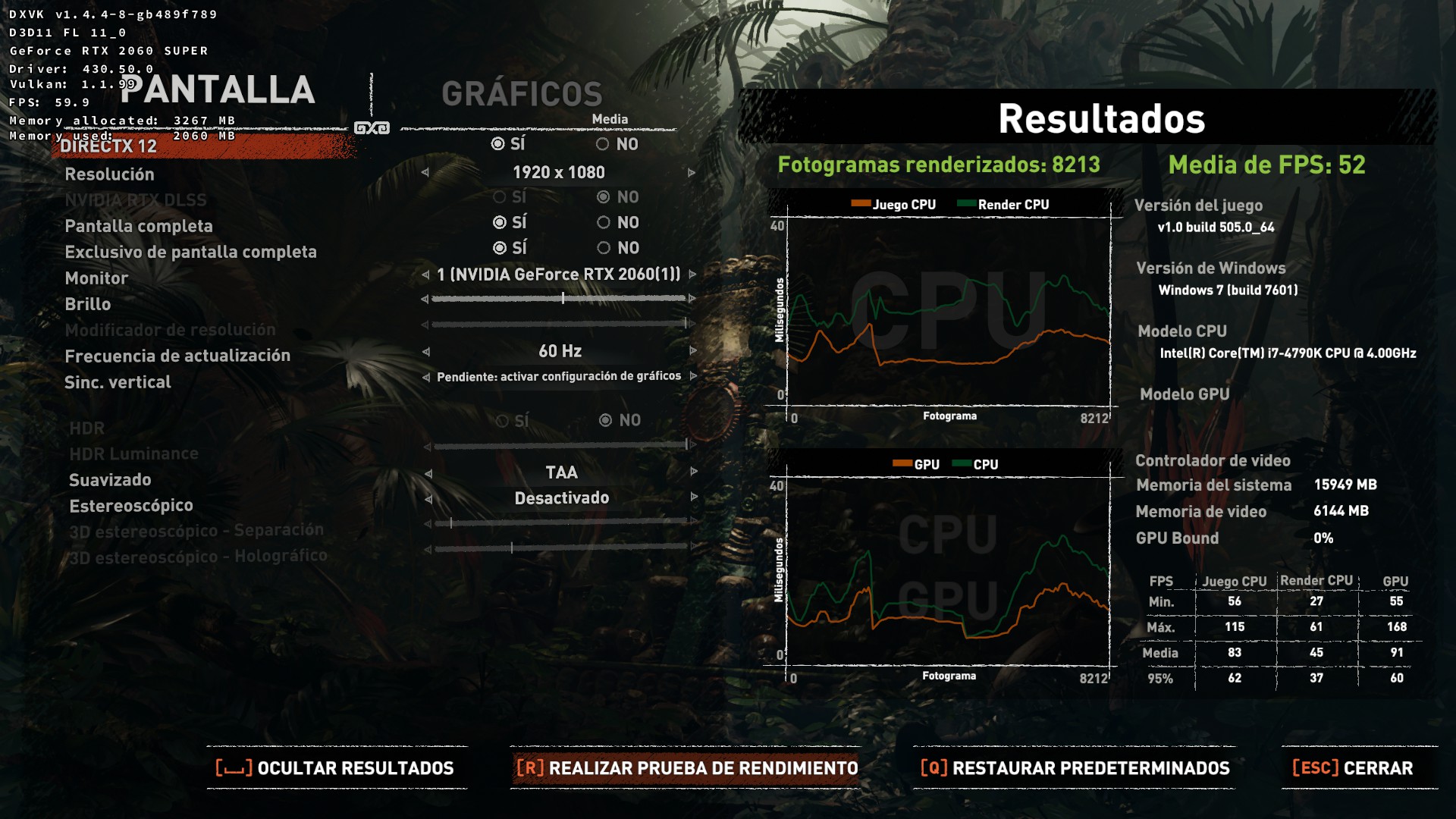 According to PROTON, my card has 6GB of VRAM, when it has 8GB of VRAM.

By the way, Shadow of the Tomb Raider TRIAL doesn't work in DX12 mode. (Ignore the "si", because after the game reset, it crashed to desktop)
0 Likes

View PC info
Most of the games that I've tested so far that worked with the previous version of Proton don't work with the latest Proton 4.11-8. Good thing I can fall back to Proton-4.19-GE-1 (posted earlier this week on GamingOnLinux here) to get everything working. Are most people having issues or is it just me?

***Edit***: I fixed this issue by removing everything in the .steam/compatibilitytools.d directory. I think too many files there was messing up the default proton.

View PC info
If the new Rockstar Launcher runs, we can play RDR2 under Linux next month. Thanks to Vulkan probably no performance loss compared to Windows. Who would have thought that possible a few years ago?
2 Likes, Who?

Out of pure curiosity: Why don't you play RL natively? It's only an OpenGL port, but the performance is very okay.
3 Likes, Who?

Quoting: Comandante ÑoñardoPerfect timing, Valve!
I mean, Just Cause 4 is FREE2PLAY this weekend..

50GB for a weekend... only 3500 players peak in the past 24h
at least they have better reviews now

but what does this have to do with a proton update? the game has already platinum ratings
0 Likes
1/3»
While you're here, please consider supporting GamingOnLinux on: