Upcoming point and clicker 'Born Punk' has a Steam page up, coming to GOG and newer trailer

I do love a good bit of Cyberpunk, I also love the point and click genre getting a resurgence in recent years and Born Punk really does look and sound great.

Funded on Kickstarter last year, Insert Disk 22 have been hacking away to get the game ready to release. Ahead of that, they now have a Steam page live you can properly follow it on. Additionally, they've now confirmed it will release on GOG but no store page up just yet.

Something we also missed was an update last month, which had a new trailer in it, check it out: 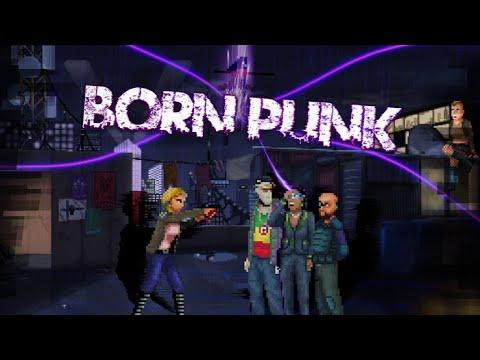 A former combat hacker, a corporate CEO and a gangsta-rapping android get possessed by mysterious, otherworldly entities and must band together to save themselves and uncover the entities' origins. Talk, puzzle and explore your way through this (often humorous) cyberpunk thriller.

Once it has a release date, we will let you know. The Linux version is expected to launch at the same time as other platforms.

Want to see more games crowdfunded and coming to Linux? We have a dedicated page here.

Gobo 14 Jan, 2020
View PC info
People who are interested in this also might like to see if Technobabylon runs on Linux. I played the demo on Windows a few years ago and only hesitated to buy the game because I didn't want to lose my mind trying to get it to run with Wine.
1 Likes, Who?

I played through Technobabylon on Linux. I think using Steam/Proton...? I've never had any issues with AGS games running thru Wine though.
0 Likes

View PC info
I played Technobabylon natively with a self-compiled AGS some time ago.

I should really look if I can create a portable package of that AGS for people to download and use. Maybe poke also Wadjet Eye with it, or maybe see if that could go into Steam like that DOSBox container thing.
1 Likes, Who?

Quoting: DrMcCoyI played Technobabylon natively with a self-compiled AGS some time ago.

I should really look if I can create a portable package of that AGS for people to download and use. Maybe poke also Wadjet Eye with it, or maybe see if that could go into Steam like that DOSBox container thing.

Dave from Wadjet Eye once said that his wife is making the Linux version, then that she was ill, then silence. This time, I hope it just wasn't worth the effort...

Maybe you can lend a helping hand here?
0 Likes
While you're here, please consider supporting GamingOnLinux on: