Linux Mint's Clement Lefebvre wrote another of their monthly progress reports on how Linux Mint and their Cinnamon desktop are doing and it's all great news.

In regards to their funding, they've managed to smash another record. From donations made by users, the previous record in a single month was April last year at $24,170 but in December 2019 they managed to pull in $25,352 showing that plenty of people appreciate their work.

They're now working on LMDE 4 (Linux Mint Debian Edition), their own special brand of Debian that's a testing area for if "Ubuntu was ever to disappear" using Debian as a base just like Ubuntu. LMDE 4 will ship with all the improvements the last main release of Linux Mint had including the addition of boot-repair, their system reports feature, better language settings, HiDPI and artwork improvements, new boot menus and tons more. Additionally, they're going to be adding a new boot menu option for NVIDIA users which install the NVIDIA driver "on the fly, so both the live session and the installed OS work out of the box" which is great.

Also mentioned is the Cinnamon desktop environment version 4.6, which is set to get some big display improvements. You can finally set the frequency of your monitors, fractional scaling for much better HiDPI support and each monitor can be set differently. 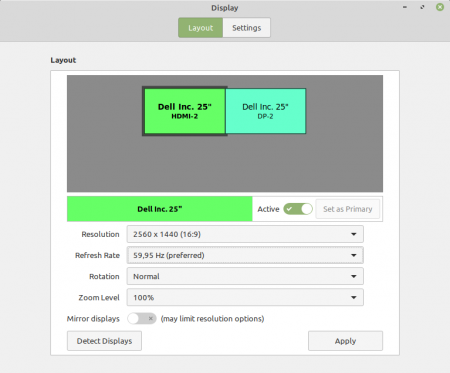 I'm quite a fan of Cinnamon, a nice no-frills environment that mostly just works and stays out of your way and it just keeps getting better. Linux Mint continues to be a great beginner-friendly Linux distribution.

Lastly, they mentioned the MintBox 3, a compact mini-PC is now shipping with two different models with the Pro at $2,499 and the Basic at $1,399. Both very pricey but also quite powerful with the Basic model having an Intel i5-9500 and the Pro having an i9-9900K + GeForce GTX 1660 Ti 6 GB. So while it may seems expensive, it's not a bad price for such a compact unit and it must sell since this is the third generation.

View PC info
Before switching to Manjaro with KDE Plasma, I was also using Cinnamon (though I just installed it on top of a normal Ubuntu).
It is indeed fairly nice and I think one of the easiest interfaces for people switching from Windows (or just testing the waters in general).
2 Likes, Who?

TheLinuxPleb 3 Feb, 2020
View PC info
They finally got that menu scroll to work fast. That must have had something to about it. It used to be really laggy.

Really nice job from them. :)

View PC info
If anyone can make fractional scaling work well it's these guys. KDE's solution barely works, Gnome's creates more problems than it solves and the best comment from a foss developer on the issue I'd read went along the lines of "it's not our fault hw manufacturers put out badly designed computers (badly designed in this case meaning e.g. 1080p on a 13" screen), won't fix" - do you want people to use the system you make or not?

Anyway, I had to give up using Cinnamon on a computer I own for this specific reason and move to KDE which, as far as I can tell, deals best with this, but which unfortunately is too cluttered and messy for me. Looking forward to going back to Mint when this is implemented! :-)
0 Likes

View PC info
Mint and Cinnamon, stability, consistency and ease of use, the way Linux should be.
0 Likes

Quotewith the Basic model having an Intel i9-9500

View PC info
Beginner-friendly also means it's lazy-friendly. I'm certainly an experienced enough Linux user to setup and use even the most mystifying distros, but I'm lazy, and Mint works on most systems I've thrown at it without any issues and has a great out-of-the-box experience.
3 Likes, Who?

View PC info
"a nice no-frills environment that mostly just works and stays out of your way and it just keeps getting better."

That goes for the whole distro as well!
In all those years I use Mint (constantly also trying different distros on other partitions to keep informed), it never "just fell apart" after a system update, like other distros I used (often rolling release).
It might not be "sexy" to use a distro that others call a "beginners distro" and that has seasoned software in someones opinion, but it almost always, like you say about Cinnamon, just works and never stands in my way.
Nvidia integration in LMDE 4 is really great and is also exactly what I missed!
0 Likes

View PC info
While it is nice that they are building a specialty, out-of-box nvidia solution, they also shouldn't have to. If only nvidia would just follow established standards.
2 Likes, Who?

View PC info
Congratulations to the Mint crew! Although I've not used Mint in years and years, it was the go-to distro I'd hop to in my early Linux years, when Ubuntu befuddled my new-Linux-user mind. Skol!
0 Likes
1/3»
While you're here, please consider supporting GamingOnLinux on: