Paradox have updated their handy launcher - should help Linux gamers too

Paradox have released a new version of their game launcher, the screen that appears when you load most of their modern games to give a few little handy features.

Not to be confused with the standalone Paradox Launcher you can download from their store (Paradox need a better naming scheme…), this is the application you see when you load up Stellaris, Cities: Skylines, Prison Architect and so on. Today "2020.2 - The Palindromic Version" was released. 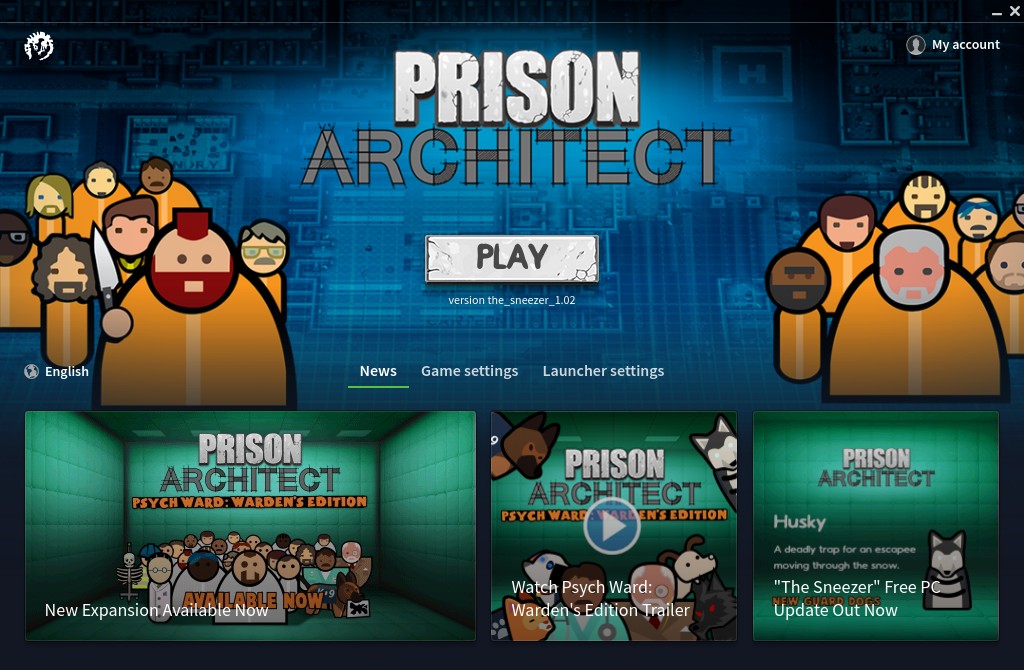 Pictured: Launcher example for Prison Architect (since Paradox now own it).

If your comment is about to be along the lines of "oh no, another launcher" and whatever else, don't fret. A lot of games have their own launchers, Paradox games even did before this. However, their newer launcher unifies all their game launchers into one and they say it will "enable us to provide some really cool stuff for you all, in the near future".

As for other changes: if they can't process a mod you've install it will tell you why (if possible), there's improved support for modding when you've got hundreds, a better warning when the launcher / user does not have access to the game directories, various connection error messages were improved, the Manage Mods section now scrolls up/down automatically while you are dragging to reorder and various other UI improvements.

On top of all that, with this new update the Linux version might be a little bit more stable. Paradox said they moved communicating with SDL 2 into its own process which "should prevent it from crashing the launcher on quirky Linux setups". Nice to see us getting some care and attention there. A bunch of other bugs were fixed across all platform.

Full changelog can be seen here. Whenever you click Play on a game with it, the launcher will want to grab the update.

Eike 17 Feb, 2020
View PC info
Dunno if anybody cares, but in German, the word "Handy" is used for mobile phone. It sounds like an English expression, but it seems it isn't. Wonder where that one comes from...
0 Likes

Quoting: EikeDunno if anybody cares, but in German, the word "Handy" is used for mobile phone. It sounds like an English expression, but it seems it isn't. Wonder where that one comes from...

Handy does not mean radio handheld in the U.S. It means practical and convenient.

EDIT: I might have read you wrong. Did you mean that handy means radio handheld in Argentina?

View PC info
Ah, now is Stardock could do the same and provide a regular, SDL2-based launcher, maybe we'd have less issues with steamplay. Most of their titles are plagued with launcher issues on protondb (luckily, it can be bypassed with /nolauncher).
1 Likes, Who?

View PC info
Dunno if Prison Architect got an update, but it still doesn't launch at all unless I change the launch command to "./PrisonArchitect.x86_64 %command%"
0 Likes

Quoting: MayeulCAh, now is Stardock could do the same and provide a regular, SDL2-based launcher, maybe we'd have less issues with steamplay. Most of their titles are plagued with launcher issues on protondb (luckily, it can be bypassed with /nolauncher).

One thing that baffles me is how many games have launchers or splash screens that are less compatible with wine than the main program.

They make an entire game using best practices and engines that implement multi-platform. And then they make a menu with a few buttons and content pulled from their website, and it breaks. Not sure exactly why it happens - sometimes it uses some Microsoft libraries/fonts or relies on internet explorer, sometimes they use a different media format, sometimes it just doesn't deal with file paths correctly, or maybe they are just pulling more dependencies for this tiny static screen. There doesn't seem to be a common reason, it is just something that is done badly.
4 Likes, Who?

Quoting: eldakingThere doesn't seem to be a common reason, it is just something that is done badly.

There is not a single good reason for these launchers to exist in the first place. It's just lazy software engineering. Nothing they do couldn't be done just as well in the main application (and/or in Steam, which most Paradox games require anyway). Their most common use case is to adjust the configuration in some fashion, which most people do exactly once after installing a game and then never again. Even if that would require a game restart, it would still be preferable to having the deal with an useless extra step every single time you start the game. Really, what's next? A launcher to launch a launcher?
2 Likes, Who?

In Australia, we usually call them "CB radios", though they are sometimes called "handheld radios" or just "radios"...


Quoting: Liam DaweHandy in the UK means convenient or useful.