China hasn't exactly been the easiest market to release games in, for various reasons, and now they've banned Plague Inc: Evolved on Steam.

For those who haven't played it Plague Inc: Evolved is a game where you create, spread and evolve a pathogen around the world. With the fear and curiosity around the deadly Coronavirus spread, recently a lot of people flocked to the game.

Why? You can customize your run, and with Steam Workshop support people were simulating the Coronavirus which exploded the popularity of the multiple-year old game. This is to the point where it hit close to twenty thousand people online at one point. 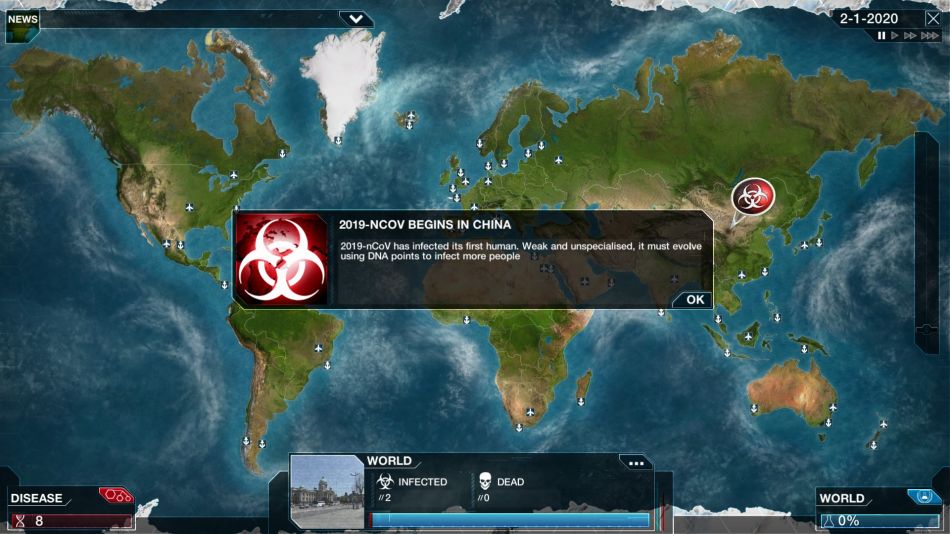 Seems China eventually took notice of this, so they've now banned it in their country. On Steam, the developer Ndemic Creations announced yesterday that Plague Inc. was removed because it "includes content that is illegal in China as determined by the Cyberspace Administration of China" with this being out of the control of the developer and there's not a lot they can do.

I will never understand the Chinese government and why they do things like this, they've been quite overzealous over games for a long time. That's the point though: it is just a game, it's not meant to be taken seriously but simulations like this can still help people learn and understand how things work. To the point that Ndemic themselves mentioned how "Plague Inc.’s educational importance has been repeatedly recognised by organisations like the CDC and we are currently working with major global health organisations to determine how we can best support their efforts to contain and control COVID-19".

Want to simulate your own pathogen? It's on Humble Store and Steam.

View PC info
One of the best way to encourage pirates... and rise sell for everyone else.
0 Likes
TheRiddick 3 Mar, 2020

View PC info
China is like a successful version of North Korea. However I don't think the Chinese people will stay obedient forever, cracks are forming as PRC's grip gets firmer.
1 Likes, Who?

t3g 3 Mar, 2020
View PC info
This is why so many people are cautious about Chinese money being used in American companies.

A Chinese company (Tencent) owns so much of Epic Games right now, but Sweeney still holds the majority. But what happens if he leaves or dies? I’m guessing his shares go to Tencent.

Besides the lack of Linux support on Epic Games Store, I don’t want to spend real money on that platform due to multiple shady businesses practices. I tend to lean towards GOG these days instead.
2 Likes, Who?

View PC info
It's a regime, regimes are very, very serious about themselves.
1 Likes, Who?

View PC info
My country is totally not perfect, (well look at our politics' last week 'poop'storm). But throught my life, living across 5-6 prime ministers, across many colourful and dark history in my country. If looking back on many past outbreak like SARS, JE, H1N1, and many I don't remember; AFAIK, I'd never seen any "filtering" in the name to maintaining "stability and harmony" or calming down people. In fact, any "filtering" will add more fuel for chaos and instability, at least here.

(BTW, reccurring problems here mainly due is too slow to inform us news or updates due to some archaic breaucracy. Well, getting better thanks to social media, but the problem is still there.)

I know many leadership in many countries around the world will use "fake news" excuses to deny, to calm down and hell even to "filtered" unwanted infos all together. For me, telling the truth and trying as hard as possible to containing or fight this virus from spreading/harming us certainly makes me sleep better, IMO.
Hiding the truth makes anything getting worse.
2 Likes, Who?

View PC info
Ndemic Creations should roll with this pathetic nonsense and use it in their advertising material. Put someone in a yellow teddybear suit with a red shirt playing the game in a trailer. What could go wrong?

That's wishful thinking. People traditionally don't care about being oppressed as long as they have food on the table. And even if they don't have food, they stay calm as long as their government manages to lay the blame on someone else.
1 Likes, Who?

Quoting: HoriTrue but it just prolongs the inevitable.

Again, wishful thinking. There is no historic evidence that democracy is the inevitable outcome of a nation's development and neither is there any evidence that democracies are intrinsically stable. Right now we're witnessing the -opposite-, rather. It's not authoritarian systems that are falling. It's the democratic ones that are converted back into more authoritarian systems.
7 Likes, Who?
DarthJarjar 3 Mar, 2020
To be fair with the chinese government, it seems that traditions and especially family pressure largely dwarf government pressure in the chinese society. I wouldn't be surprised if alleviation of that pressure was a goal of the government in quiet a number of cases.
OTOH, "a iron hand in a velvet glove" is very chinese thing. In other terms, the closer to the power you are, the more you will feel the iron, while the layman will feel (relatively) unaffected by the organisation of power.
You should also not make the mistake of taking the party for a monolithic hive mind under the direction of a petty idiot James Bond villain.
0 Likes
1/3»
While you're here, please consider supporting GamingOnLinux on: