Recently, Google held an online Google for Games Keynote and quite a lot of new information came out of it including new games to come to Stadia. The majority of it was aimed at developers, although plenty of info for consumers came with the various presentations.

Firstly, what could be quite a big one, Splash Damage have announced they've teamed up with Google to make an exclusive Stadia game. Splash Damage worked on Gears of War, Halo, Dirty Bomb, Wolfenstein Enemy Territory and more. Probably safe to say it's going to be some sort of shooter. 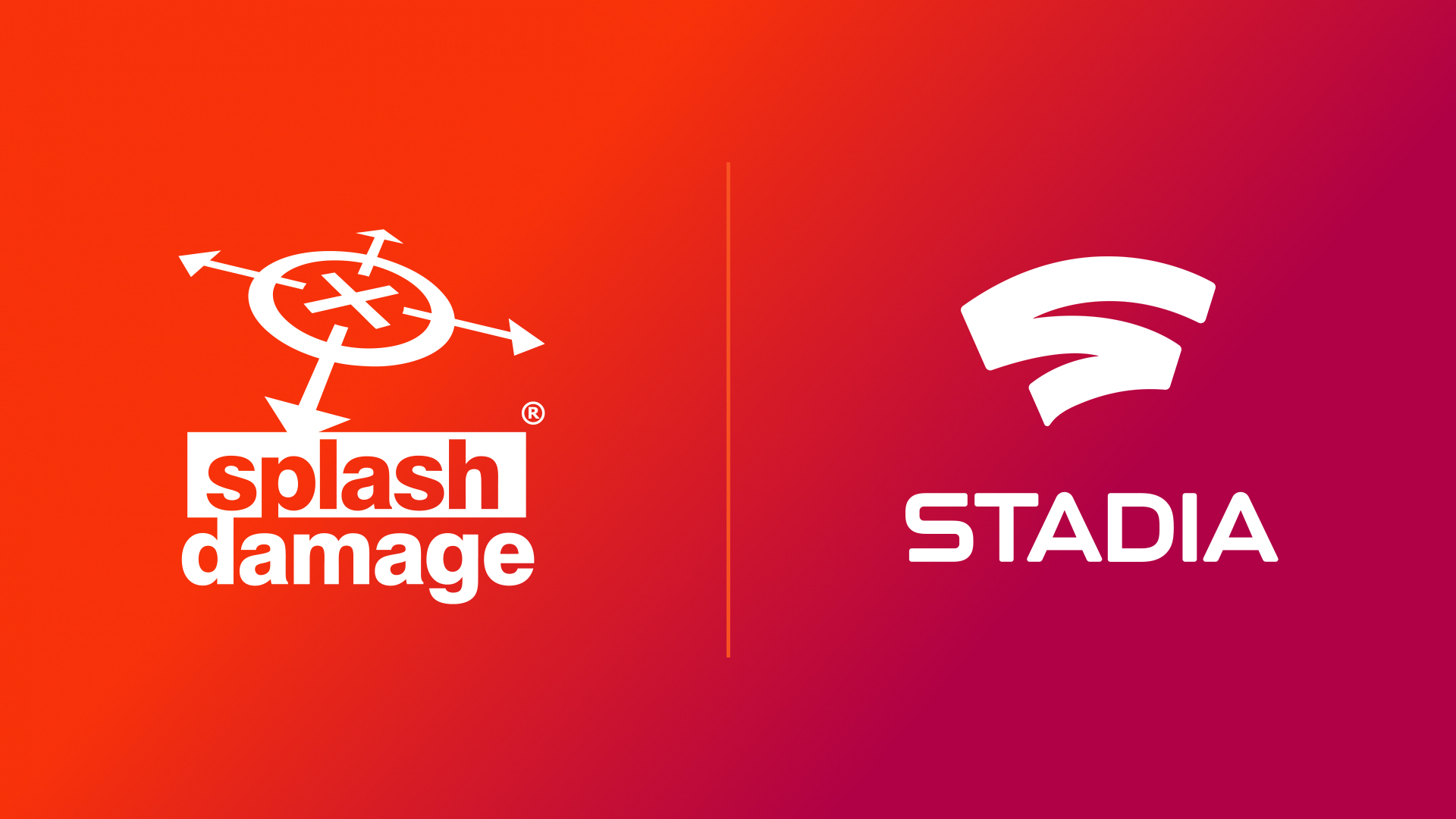 We’re thrilled to finally announce that we’re working on an exclusive title in partnership with Google Stadia. At Splash Damage we’re always looking to innovate, and always looking for partners and platforms that allow us to do just that. We’ve been huge fans of Stadia ever since it was announced and have been amazed by both the technology and passion for gaming that the Stadia team has.

They're obviously not giving out any other details just yet, although they did say more will be shared over the coming months and the way it sounded was that it's well into development. We will let you know more about the Splash Damage game when it's announced.

They reiterated that 120+ games will come to Stadia this year, and they showed off the below image mentioning that "the support from the game development community only continues to grow, we have hundreds of titles in active development from the best studios in the world - from teams with incredible history like Electronic Arts and Ubisoft": 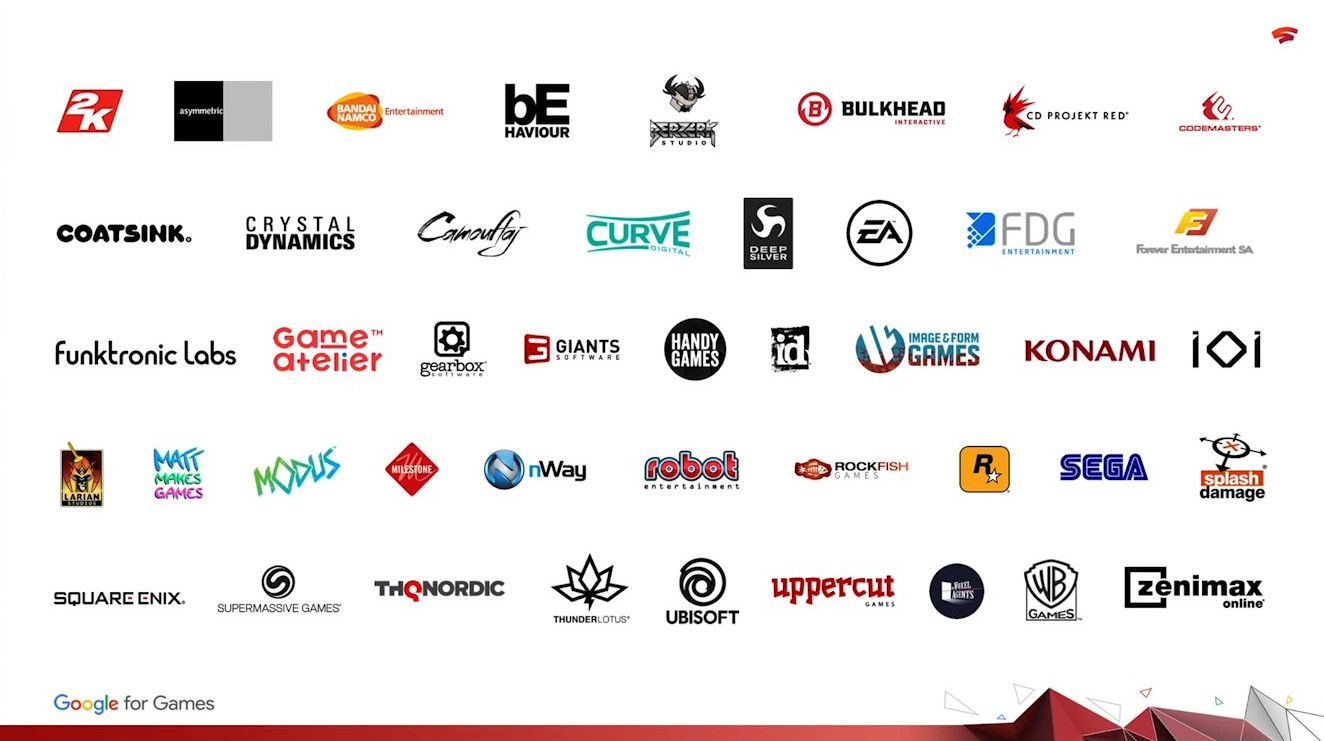 Some pretty big names up there, I think we're going to see quite a lot of surprises come along to the Stadia game streaming service this year.

Also announced is Stadia Makers, a partnership with Unity for funding from Stadia including development hardware (and they're not asking for exclusivity, only a launch on Stadia at the same time) plus technical support and so on. This is open to developers using Unity 2019.3 or later and anyone can apply on Stadia.dev.

With Stadia being out for a while now for Founder/Premier Edition purchasers and Buddy Pass receivers, they've worked on improving the Stadia back-end. They've now integrated Backtrace for crash reports, Vivox for game voice communication and PlayFab.

It gets quite interesting when you listen to Bungie talking about porting to Stadia in the second video. They mention Vulkan, Linux, PulseAudio and more and it only took them about 6 months to port Destiny 2 over to Linux for Stadia with the bulk of the work being getting it working with Vulkan. However, that's a short time for such a massive game as they did have on-site help from Google.

In one of their older Stadia announcements, they showed off Crowd Play, which let people watch a video and then click a button to jump into that game at the point shown in the video. Google said that will be rolling out later this year. That's going to be a big pull for Stadia. Watching a game on YouTube from a favourite creator, then jumping in yourself. I don't think we should underestimate how much power that will have for the regular viewer.

Other special Stadia features will be coming soon, like allowing "content creators" to share special links to allow followers to click and get into a game on Stadia which includes a feature to have a link to a specific 30-second section. Google said that could be useful for games that have random seeds, to share exactly what the streamer has there and then. Plus special features for YouTube livestreamers running a Stadia game, like a live-poll to change what happens.

If you're interested in seeing all the Stadia videos, they're up on this YouTube playlist. That's just some of the highlights and stuff coming to Stadia across this year.

As always, we hope you find our Stadia round-ups interesting, helping you to keep up to date as the game streaming service expands. It currently works great on Linux, as we've shown a few times now. You can see our own Stadia Playlist on YouTube.

elmapul 24 Mar, 2020
View PC info
i'm very worried with the low viewership on stadia official channel, even those key notes, the video with most views were like 66% for android developers, and just 33% stadia, but this is reasonable since its for developers, what worrie me the most is the channel for gamers...
and considering that a lot of youtubers and media in general are trash talking stadia, it will be an rough start.
the good news is: while everyone is trying to kill stadia, google is showing that he will not give up, contrary to what most people fear or expected, its even better that google is doubling down on their promisses while stadia is having trouble to prove then wrong.
as they say:
"when you are in the bottom of the wheel , the only path is upward"
if google can climb out of this hole, he will show to consumers that they have no reason to fear, "since it didnt gave up before when stadia was bad, now that its doing fine, there is nothing to fear"

the issue is: this will be enough to make developers support linux (i mean, offline on steam and etc) and to rise our marketshare?
i'm afraid not, pc enthusiasts arent likely to give up on all their tools for modding, 3D modeling etc so they can play it on linux, unless more tools get ported, the market shouldnt change much, and if console players didnt migrate before, i dont see why they would now.


not to mention that nvidia geforce now just did the pact with the devil, and microsoft playanywhere (including xcloud) seems better for many people.
0 Likes

Iperpido 24 Mar, 2020
View PC info
Well, good news.
Meanwhile, i've still some problems to run 4k stadia from my second pc.
But i suspect it's not a Linux issue.
It's working flawlessly from my main pc (ryzen 7 1700x and radeon rx 5700x), but un my second pc (ryzen 3 1200 + radeon rx 560) has seems like there are problems decoding the video stream in 4k, the game is laggy and unplayable.
works quite well on full hd.

Seems like the second PC isn't able to decode the video stream on the GPU, and the CPU isn't powerful enough.

I've tried with chroimium-vaapi on arch, but it seems it can decode using the GPU only on h264.

Same results on windows too, so as i said it's probably not a problem related to Linux.

i appreciate, that they have to make a linux version, but i dont want to pay twice for games
0 Likes
Purple Library Guy 24 Mar, 2020
I have to say, so far things are working out roughly as I hoped. That is, it isn't dying, but it shows no signs of taking over. I've always said I want it to succeed enough to make the idea of developing games to include a Linux target more mainstream, give Vulkan a boost and so on--but I don't want it to succeed enough to make streaming the dominant form of gaming, because I really hate that idea.
So far, so good.
6 Likes, Who?

View PC info
I only hope the service will keep growing :)
1 Likes, Who?

i appreciate, that they have to make a linux version, but i dont want to pay twice for games

But War Thunder is already on Linux
0 Likes

View PC info
So in watching the "Bringing Destiny to Stadia" video, about 10 minutes in, I find it interesting how many people they put onto the Stadia port over 6 months. And 6 months, that's an insanely short amount of time. Bungie really had to invest in it, and honestly I don't think they would have ever remotely considered such a porting investment were it not for Stadia.

I also noted in the video (still watching) that there was mention of Unreal Engine having Vulkan support. Last I heard, that support wasn't the greatest on desktop. Maybe with a push on Stadia, then that might just give some incentive to change, which would definitely be beneficial to desktop GNU/Linux.

--extra: "Google has technical certification requirements", relating to frame rates. I suspected as much. You can't just slap any old game on Stadia; Google require the game to run well.

Oh that's something that iD Software covered last year. Basically you can develop on a client machine, which is possibly (let's face it: probably) Windows rolled out company-wide as standard. That hooks into some server-side Stadia instances, where the code is actually run, debugged, etc. Your basic server/client setup. I believe they can also use GNU/Linux for it - I seem to recall the Stadia instance connection being pretty platform agnostic.

I think Google control most of the server instances, but they do have the option of deploying dedicated "Stadia boxes" which do the same thing, but locally instead of at a data centre. It's actually this hassle that most talks on the matter have mentioned that you can just do the same thing with "Linux" (GNU/Linux) desktop machines as a test first, before jumping into Stadia.
2 Likes, Who?
1/2»
While you're here, please consider supporting GamingOnLinux on: