Those crazy-smart folks over at Collabora have continued hacking away on Monado, a fully open source OpenXR (VR / AR standard) runtime for Linux. Now it's progressed quite far and it can run Blender VR.

A refresher on Monado: Monado is the first OpenXR runtime for GNU/Linux. Monado hopes to jump-start development of an open source XR ecosystem and provide the fundamental building blocks for device vendors to target the GNU/Linux platform.

Writing on the Collabora development blog, engineer Lubosz Sarnecki mentioned that Monado now has a "new monado-service binary and out of process compositor" which brings several advantages over the original in-process model. It now has a separate render loop, with the compositor now being able to provide a constant frame rate "even when the application doesn't deliver frames on time". Something that's absolutely vital to produce a smoother experience and help prevent nausea.

They said this advanced work also means the Monado OpenXR compositor can now be started asynchronously to the application, and run on its own without any application which is required for being able to run multiple clients in the future and for implementing OpenXR extensions like XR_EXTX_overlay.

You can see a demo of the new abilities in the below video, which shows off the new Blender OpenXR VR Scene Inspection and using Blender's EEVEE renderer: 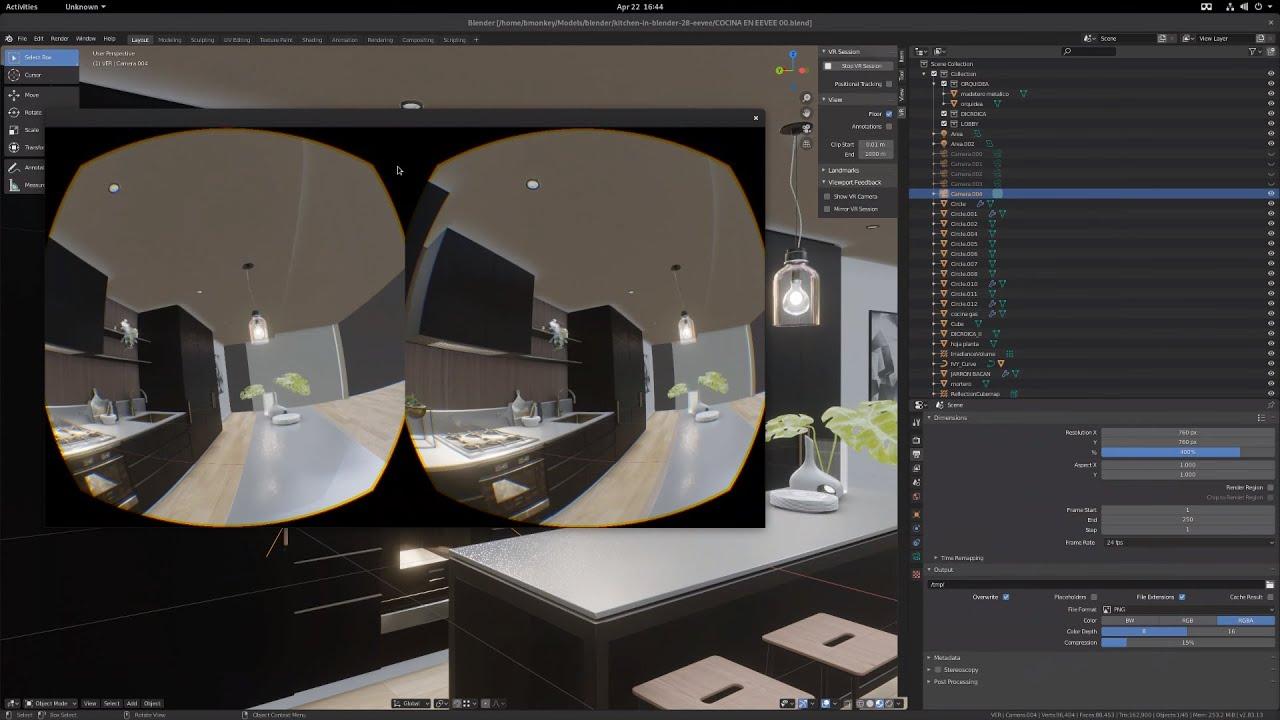 Still quite early of course and lots of work still to be done. They're getting there though and they recently managed to boost the compositor performance, improved support for direct mode on NVIDIA while also now being able to recognize the Valve Index and the Oculus Rift series of HMDs.

Why is all this important? If we want the future of Virtual Reality and Augmented Reality on Linux to be bright, Monado gives developers something solid (eventually) to target and test with.

Which game, how did you play?
0 Likes

Comandante Ñoñardo 30 Apr, 2020
View PC info
Anyone else watch these kind of videos crossing the eyes?
4 Likes, Who?

Which game, how did you play?

Indeed, that's depending on the game and the movement it offers.
E.g. in Beat Saber you're mostly standing in the same spot all the time. Only the blocks you slice are moving (there are some pretty awesome custom maps, where they do crazy stuff with walls though). Here nausea should be at a minimum.
Pistol Whip, Synth Riders and OhSape have moving environment, but it's constant (speed and direction) and you have e.g. a non-moving platform you're standing on as a reference, which should barely cause nausea.
In Half-Life: Alyx you have the choice: Teleportation (with a blink or with a dash), which barely causes nausea. Or locomotion, where the ground is moving below your feet. This causes nausea to me after a while.
Boneworks only offers locomotion (nausea), as well as Subnautica, but Subnautica you play seated. The Solus Project has dash and locomotion, but since the last update they have a fixed height of the HMD above the ground, meaning that if you are standing on a rock in VR, and do a step IRL, your VR height is changing, which again can cause nausea.

You can also train your "VR legs", it takes time, don't overdo it, but you can mitigate the nausea. E.g. I got instantly motion sick, when I tried Everspace in VR. Due to its faced paced action packed nature it's requiring a strong stomach. Elite Dangerous was perfectly fine, as it's more the simulation type of game. In the mean time, I can now play Everspace in VR way longer.

Fun fact, if the brain get's contradictory inputs of eyes and body, it is in our genes, that we must have eaten something wrong. And thus makes us wanna throw up, like being really sick ;)
2 Likes, Who?

Quoting: CorbenI got instantly motion sick, when I tried Everspace in VR. Due to its faced paced action packed nature it's requiring a strong stomach. Elite Dangerous was perfectly fine, as it's more the simulation type of game. In the mean time, I can now play Everspace in VR way longer.

How did you get it to work properly? I tried the native, which kinda works but the 3d scale seemed wrong and the controls didn't work. On proton I couldn't get it to work at all.

Alyx is pretty good for trying the different forms of movement. I've been playing on the 4th locomotion option. I do need to start by moving slowly, but after getting used to it I can walk around fine without issues. As with everything in that game, movement seems to be beautifully balanced.
0 Likes

Quoting: PatolaHow is Elite: Dangerous even playable in VR?

I have played VR three ways depending on the game:
1. Standing with VR controllers (most VR games)
2. Sitting with gamepad (e.g. some platformers and racing games)
3. Sitting with keyboard + mouse (e.g. some flying games)

Looks like Elite: Dangerous is a number 3 :).
Your base stations of course should be in range of your desk with keyboard + mouse.

As for the nausea. As a beginner you will get sick. The more you play, the longer you can last without getting sick. Walking with a moving environment is no problem for me anymore. However, I noticed I still have to train myself for flying (six degrees of freedom).

Quoting: EhvisHow did you get it to work properly? I tried the native, which kinda works but the 3d scale seemed wrong and the controls didn't work. On proton I couldn't get it to work at all.

It's tricky, not officially supported, and still has an input issue with the mouse.

I think the most important launch option was -mode=vive -vr. Haven't tried it in a while. I remember though, that centering the mouse cursor helped against the input issue.

Quoting: PatolaHow is Elite: Dangerous even playable in VR? It has a bazillion keybindings, I can't imagine how that could translate to the limited Index controllers' buttons.

HOTAS ;) Sure, it's best to learn the controls before you start playing in VR, but I played Elite Dangerous for quite a while (200 hrs) and knew the controls. Then it's really really good in VR.

View PC info
Good to see progress on Index. A bit surprising Valve aren't backing Monado directly, like they are doing with radv. Or are Valve partnered with Collabora on this?
0 Likes
While you're here, please consider supporting GamingOnLinux on: