You've probably played multiplayer games with different team sizes before but probably nothing like OBEY. Released out of Early Access just this week, it's a pretty amusing idea.

All players control a tiny little rabbit, and you're all trying to earn the most money by doing different things around the map. However, one of you can also control a massive weapon, and anyone can attempt to run in and kick the other player out of it. It's all about being king of the hill, sort of anyway. Everyone sets up traps to try to take down other players, while also trying to make the most money and possibly control the almighty weapon to shoot other players. 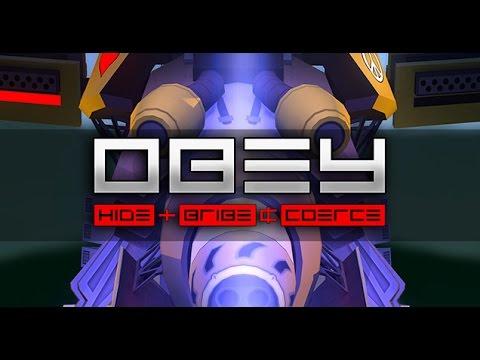 You have to be smart though. Simply making a direct run for the massive robotic weapon isn't a good idea. Other players will set traps, and the player in the weapon will probably spot you and annihilate you. So being a bit smarter is needed. You will need to bribe and coerce opponents into setting things up how you want and that's where it can become interesting.

A fun game that's certainly very different, something of a social experiment in communication and leading players through your own plan without them knowing, as they think what they're doing will help them. Be sneaky, and hopefully get the most money.

You can buy OBEY on Steam where it's 38% off until May 19, there's also a 4-pack available since it requires human players (there's no AI).