The Fun Pimps are working towards another huge upgrade for the survival game 7 Days to Die, with a new experimental build out now to try.

It's a massive upgrade again to many areas of the game, and it does sound quite exciting. One of the best survival games available on Linux, easily. Alpha 19 can be tried out in the "latest_experimental" Beta branch on Steam. Keep in mind it will be unstable since it's not yet ready for everyone. With that in mind though, it's still fun to try. Some of what's new includes: Linear Color Space Lighting, Improved Gamepad Support, New Survival System & Critical Injuries, Interactive Loading Screen, Food and Water Bars in the UI and even HD Characters, like my friend pictured below while exploring myself earlier. 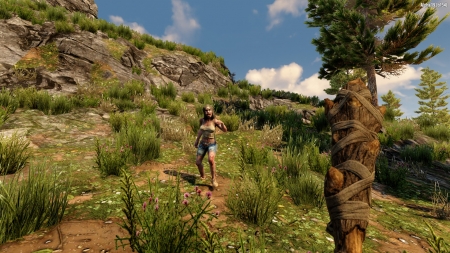 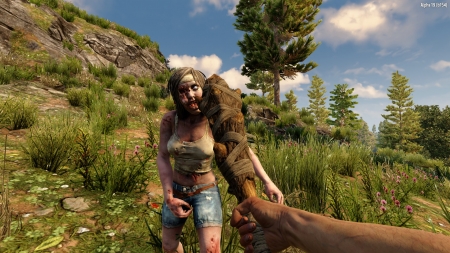 They've done some seriously good work on the updated models, which they said not only look better but will actually result in slightly better performance due to using less "draw calls". Certainly makes things more interesting and even a little bit scarier.

Other updates include a Dynamic Music System (not on Linux yet), Quest Improvements, a new system for improved on-screen directions to help you locate important items in the world, the hand-made Navezgane map was expanded and the random map generation was improved too, lots of new environment art and the list goes on.

I feel it's also important to note they've added in some data tracking with "Super Nimbus and GameSparks", which they say will continue from Alpha 19 until the "Gold" release. They're capturing things like how you die, XP earned and other gameplay but they've said no personal info is being captured. Doesn't appear to have an opt-out ability either.

Full list of changes here. You can pick it up on Humble Store and Steam.

View PC info
I had lots of funky issues with video when I first started a game, but after playing about with the presets, then turning off things like motion blur and ssao, I've got a nice stable image. I had some texture flashing initially, but it seems to have settled now and I played an hour with no issues.

Other than the improved lighting and much improved zombie textures (mostly - there's still some original zombies out there, like the business man and hoodie boy), the biggest thing I notice is that:

a) The starting bow seems mildly less useless. Still not great, but at least I was hitting with it more than not. That's a relief!
b) Melee feel chunkier. It was always a game that didn't quite "connect" before, and there's still that strange distance that you need to just experiment with to know when you can hit, but they can't. In the past, that felt a bit floaty, but now it feels more solid. Can't wait to get my sledgehammer to try it out more... directly.

c) There's loads of things you can't scrap now. Tins, crafted tools, crafted clothes - you can only drop/modify/repair them now.

Otherwise, it's all very familiar and I'm looking forward to spending a bit more time in game to get a feel for it.
0 Likes

View PC info
I don't think the Dynamic Music System is working in Linux, they disabled it in one of the early A18 versions because it caused crashing anytime you talked with the trader. They blamed Unity and said that they are waiting for them to fix it. Played for about 2 hours now and I didn't hear any ingame music, so it still must be disabled probably.

Did someone manage to run it with Vulkan without constant crashes? Specifically Nvidia, but I wonder how AMD works too.

runtimeerror 30 Jun, 2020
View PC info
I can't play it because the loading screen won't go away for me.
0 Likes

View PC info
Seriously Liam? The Food and Health bars made it into your top 5 of changes? ;D

Yes, it's still disabled in Linux due to the mentioned crash. Actually I'm not sure if we can't work around that though and as the DMS is more "important" now I'll have a look myself ... Linux users would be missing out quite a big part otherwise :(

Quoting: SolitaryDid someone manage to run it with Vulkan without constant crashes? Specifically Nvidia, but I wonder how AMD works too.

Seems to really depend on the GPU/driver combination, some play without issues (and obviously better performance than GLCore) for hours, some crash all the time.
0 Likes

Hopefully the dynamic music can be added in too. As for Vulkan, I assume that's because Unity's Vulkan renderer in the Unity version used by 7 Days to Die was still rough.

If you're ever on the 7D2D forums, you'll know that the outcry when food/water meters were removed was very real and that there is general delight that they've been brought back...!
1 Likes, Who?

In my experience it already became quite a bit more solid with the update to 2019.2 in A19.
0 Likes

In my experience it already became quite a bit more solid with the update to 2019.2 in A19.

Ohhhhh! Didn't see that Unity update noted in the changelog, could well be a lot more solid then!
0 Likes

View PC info
I played for an hour using Vulkan and it looked and performed fine for me on nVidia 440.82.
0 Likes
1/2»
While you're here, please consider supporting GamingOnLinux on: