With the current in-progress community development effort to get Easy Anti-Cheat working in the Wine / Proton compatibility layers, they continually hit new milestones.

Starting off getting one game to progress at low performance back in late June, they shared another big update recently. Going by what they said on Twitter it appears multiple titles have become playable on Linux including: Apex Legends, For Honor, Paladins, Cuisine Royale, Halo: The Master Chief Collection (single-player already works fine though), Rust and Dead By Daylight.

The key thing is, they're absolutely not trying to circumvent Easy Anti-Cheat in any way but get Wine into a state where it understands what EAC is actually doing. As one of the developers working on it, David Torok, mentioned on Discord:

This work is not about bypassing or circumventing EAC's protection in any way. The changes we are making to wine are about improving wine, and not hacking around things just to get EAC running. In the process of doing so, we are trying to make sure EAC receives correct information from wine so that detections can work as expected. We aim to make all our changes as upstream compatible as possible. Based on all of that, as we go forward, hopefully the list of EAC versions we are compatible with will grow without breaking support for any particular version.

YouTube creator Xpander recently made a video to actually show the heavy work-in-progress code in Apex Legends on Linux showing that it does in fact work. 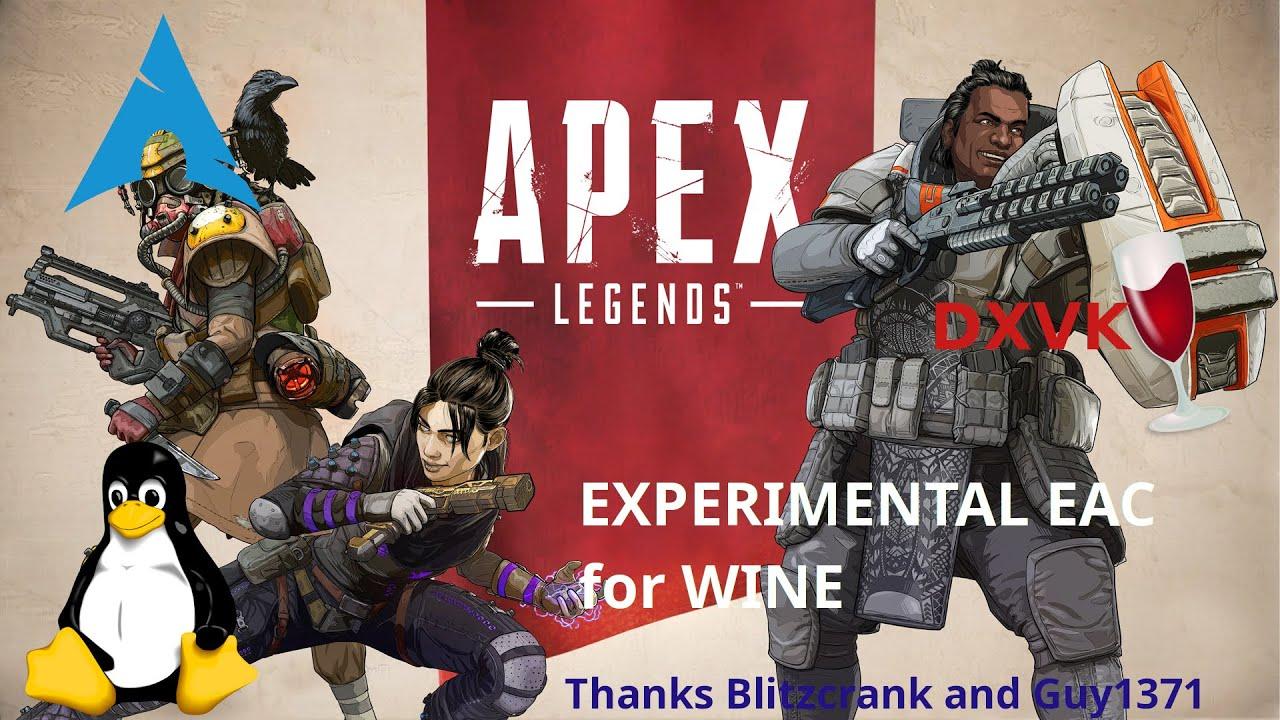 Lower performance though due to shader compilation, something Valve have been working around in the Steam Client with the background processing feature. If you wish to try yourself, keeping in mind it's very experimental and entirely possible you will get banned, you can find the info in the VKx Discord.

Personally though I would advise waiting and patience on it. Although it may be quite an exciting development, since this does not have the backing of Epic Games (since they own EAC) we have no idea how this will be handled if/when it gets upstreamed into Wine and makes its way into Proton. As long as it does allow EAC to work, it should hopefully not cause issues but it sounds like we're some ways off from that stage yet.

About the author - Liam Dawe
I am the owner of GamingOnLinux. After discovering Linux back in the days of Mandrake in 2003, I constantly came back to check on the progress of Linux until Ubuntu appeared on the scene and it helped me to really love it. You can reach me easily by emailing GamingOnLinux directly.
See more from me
Some you may have missed, popular articles from the last month:
The comments on this article are closed.
32 comments
Page: 1/4»
Linuxwarper 10 Jul, 2020

I reckon this will be accurate depiction of how gamers on Windows will react once EAC support is solidified:

Such good news. Especially the part about not wanting to circumvent EAC, so likely hood of it being blocked is low.
17 Likes, Who?

Quoting: LinuxwarperI reckon this will be accurate depiction of how gamers on Windows will react once EAC support is solidified:

Such good news. Especially the part about not wanting to circumvent EAC, so likely hood of it being blocked is low.

All Linux users will be thrown into icy waters?

I'm curious to see the response of EAC. Will they be satisfied that this method serves the purpose of EAC, or will they feel that "hiding" the Linux system behind it is a circumvention in itself. I have no doubt that some people behind the scenes are looking closely at what is happening.
7 Likes, Who?
gustavoyaraujo 10 Jul, 2020

Sounds cool, let's hope Epic games will not fight against these efforts.
6 Likes, Who?
Linuxwarper 10 Jul, 2020

Quoting: EhvisAll Linux users will be thrown into icy waters?

That's where the freshest fish are!

Seriously though, many gamers views on gaming align with Linux principles. DRM free and libre lincenses (modding) to mention two. So Windows gamers can be considered penguins that have never sought out the bountiful sea (Linux). It's contradicting how we want EAC and other anti cheat to work on Linux, but this is a necessary evil.

View PC info
So, in the near future, our DX12 support is already pretty decent, but our 'God-tier' coders, our very own Linux 'Avengers' are working on improving it's compatibility and performance, Guy's MediaFoundation work which fixes MF issues in games will be hopefully ready to merge with Wine, and now Guy and David have got EAC working and now just need to clean up/improve/merge this back into Wine, and Valve just needs to put out another Proton update, combining all these goodies together...

... and then after all that is done, that pretty much puts our overall game compatibility with Windows at what.. 90%?

I imagine this will definitely result in a boost of gamers to Linux, combined with a boost from other sources, such as the fact that Steam is coming to ChromeOS..

Good times ahead folks.
4 Likes, Who?

Ea games and especially Respawn works are great and very played.
Apex is the most tactical and strategic battle-royal to play today.

Now add Fortnite and other epic stuff, and it will be 99.99% overall game compatibility with Windows ;)
4 Likes, Who?

It's opensource, they can, but if they don't suport it with programmers, or money, i don't think is ethical in time when they attack source of money of company who supporting it...

Last thing we need is AAA games blocking linux players due to people cheating with it.
0 Likes

It's opensource, they can, but if they don't suport it with programmers, or money, i don't think is ethical in time when they attack source of money of company who supporting it...

"Ethics" and "Epic" do not go in the same line...
4 Likes, Who?
1/4»
While you're here, please consider supporting GamingOnLinux on: