RetroArch 1.9.0 is out with video player improvements, UI upgrades and more

RetroArch is practically the go-to for all your emulation needs under one roof and the project just release the latest major upgrade with RetroArch 1.9.0.

It seems they've continued going over the user interface, with an aim to make everything clearer and more useful. Part of this work went into adding a new "Explore View" for playlists, which lets you search and find content based on criteria like the amount of players, developer or publisher, the system it was released for and much more. This only looks through what you've directly added though and the metadata it uses will be improved as time goes on. 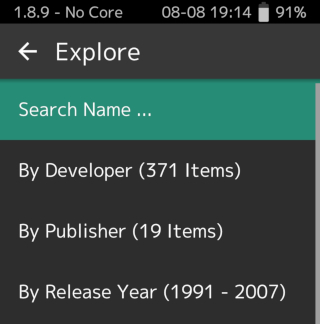 The search function that was previously "woefully inadequate" to the point that they called it "mostly a non-feature". Well, it's again a UI area they've gone back to and overhauled. You can now press 'X' on a pad or '/' on keyboard to get a search box, if you're on a playlist it becomes a filter for it and you can stack the filters to refine your search if you have a big library to search through. They showed off a little video of it in action, looks good:

There's also new animations for loading content, input remapping is easier and requires less clicking around, the video player on Linux and Windows gained a new progress bar overlay, big memory leaks were solved in the video player and an issue with lockups occurring due to it being able to seek passed the end of a file has a workaround in place.

You should also expect the memory footprint and disk I/O overhead to be reduced, resulting in a snappier RetroArch that won't bring your hardware to a crawl. On top of that, there's various other UI cleanups like not being able to set drivers to 'null' and the ability to selectively hide/enable many different widget notifications like screenshot and cheat code UI.

The team mentioned a progress report on the various Cores will be coming soon. You can read the release announcement here.

I am the owner of GamingOnLinux. After discovering Linux back in the days of Mandrake in 2003, I constantly came back to check on the progress of Linux until Ubuntu appeared on the scene and it helped me to really love it. You can reach me easily by emailing GamingOnLinux directly.
See more from me
Some you may have missed, popular articles from the last month:
The comments on this article are closed.
1 comment
niosoft 10 Aug, 2020
Can somebody explain me what's the deal with RetroArch on Steam? It's been on Steam's store as 'Coming soon' for a very long time. Is it eventually coming? Would it have any advantage to install it form within Steam? Would be nice to know.
1 Likes, Who?
While you're here, please consider supporting GamingOnLinux on: