After buying the rights to the combat flight sim Heliborne from JetCatGames, the team at Klabater have updated Heliborne into an Enhanced Edition that's out now.

This new upgrade is free to existing owners and bundles all the DLC together into the game, along with a bump to the price of the game which now has no DLC as it's just one single edition and purchase. You can see the release trailer below: 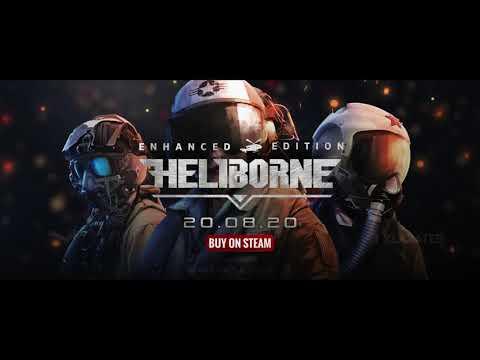 Doesn't look much Enhanced, even their own trailer shows clear stuttering.…

On the surface, it sounds like a good upgrade. Sadly though, it seems they've not taken it in a direction that players are happy with. Since the Enhanced Edition release, it's moved into a Mostly Negative user review score on Steam. It's been so poorly received that they've put the previous version up as an opt-in Beta on Steam under the "heliborne_original" tag which also contains all the DLC. You know you messed up when the community largely wants to play the original, doesn't seem very Enhanced does it? Klabater have a lot of work ahead if they wish to turn this around.

You can buy Heliborne on Humble Store and Steam.

View PC info
You know you have issues when your new trailer is a stuttery mess.
8 Likes, Who?

View PC info
Their trailer shows either strong lag or framerate drops.
Not the best choice to show off gameplay.

@Ehvis damn, beat me to it.

View PC info
I like Heliborne, played it several times since release.
The enhanced edition is a mess.
Almost everything is worst than before, the GUI and the perf first, but it’s also "less pretty" than before despite the engine upgrade.
The team said "it’s day-1 please be patient it’s gonna be better".
But it’s not Day 1, it’s Year+3

I’m pretty sure the team has poor experience, and they just wanted a "relaunch" to gather the old and new players. They really failed deeply, and it’s going to take a while to gain back the trust, and the quality. According to Steam, all previous games they touched are "mixe rated" and with a low amount of reviews.

Having the "old version" back, playable in a Beta tab on Steam, after reviews went from around 80% to 30%, is quite a proof of incompetence, IMO, but also maybe a sign of good faith ? Don’t know, but for now on, this team is on my "be carefull" list...

Quoting: EhvisYou know you have issues when your new trailer is a stuttery mess.

Where is the quality control going these days. Many game creators just through their stuff out wish some money inflow and hope for the best huh

View PC info
The default performance is pretty bad. I was getting ~20 fps in high settings with my Rx 580 and latest Mesa, not to mention that there are artifacts all over the terrain. But using -force-vulkan as command argument improved a lot the situation, with that change I'm able to get from 30 to 50 FPS in High and all the artifacts are gone! So, use the force of -force-vulkan guys... at least for now.
2 Likes, Who?

View PC info
Sad to hear
If i recall, they were supporting Linux early on.
0 Likes

View PC info
That's a bummer. It would also be a bummer to have a game made worse 3 years after you bought. That's one potential downside to games-as-a-service like we have these days.
1 Likes, Who?

[email protected] 21 Aug, 2020
View PC info
Not that the previous version was perfect, it wasn't, with poor performance for the graphics (typical Unity novice developer) and a messy UI. They also have a half-assed single player campaign where you are forced to go online to get the better helicopters. But overall it was the best we had for a gamepad-friendly heli game.

Now I cannot even start the game (run out of memory), and people says they managed to make worse what was already bad in the previous version. Unbelievable.
0 Likes
x_wing 21 Aug, 2020

Quoting: [email protected]Not that the previous version was perfect, it wasn't, with poor performance for the graphics (typical Unity novice developer) and a messy UI. They also have a half-assed single player campaign where you are forced to go online to get the better helicopters. But overall it was the best we had for a gamepad-friendly heli game.

Now I cannot even start the game (run out of memory), and people says they managed to make worse what was already bad in the previous version. Unbelievable.

Today they rolled-back to the old version.
0 Likes

View PC info
I saw the large update and then I saw the reception.

Yikes!
0 Likes
While you're here, please consider supporting GamingOnLinux on: