The Barony crowdfunding was a success, incoming big updates for everyone

Barony is a wonderful, challenging co-op first-person roguelike RPG that recent had quite an interesting crowdfunding campaign. It was a success, which means this already released game is going to see some huge upgrades.

The main point of the campaign, is for a Nintendo Switch port. We're not interested in that here of course but the good news is plenty will come to the PC version. This includes: a UI design overhaul to improve the flow of it, add split-screen play, superior gamepad support, cross-play for Switch and Steam and more. All the improvements built for Switch we will get too. 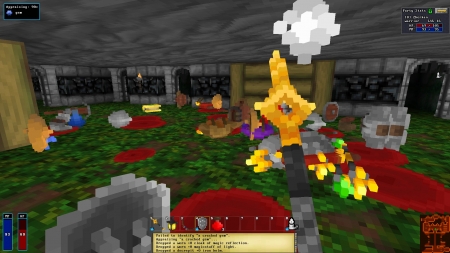 On top of that, there's also going to be a new DLC because of the Kickstarter success thanks to 699 backers pledging $40,845. This new DLC will bring a brand new tileset, giving you an alternate path. It will feature new playable races which are friendly to humans as well as new monsters, spells and items within the new unique area.

To sum up, here's all that's coming to Barony:

You can find Barony on Humble Store, Steam and GOG. Barony's code is open source too on GitHub but you still need a copy to play with it for the data. The Linux version on Steam has cross-store multiplayer with the Epic Store version too.

View PC info
Ooh I should play that again when the update is out. Wanna see the silly messages on these statues haha
0 Likes

View PC info
Yay another DLC I will inevitably end up buying for some reason even though I'm still working my way through the content of the other DLC. I for one am looking forward to the better controller support though as it's always felt a bit half baked.
1 Likes, Who?

View PC info
Ohh one of my favorite games is going to be so much better I can't wait! I have both the dlcs and them and the main game are so much worth it. Countless fun trying to survive with my friends on microphones, so hilarious.
0 Likes
While you're here, please consider supporting GamingOnLinux on: