According to a Stadia developer, streamers should be paying publishers and it backfired

After a three day event to show off new games for Stadia, along with three special demos now live you would think Google was having a good time. Unfortunately, one developer derailed it all.

For a quick recap of the Stadia event you can see day 1 here with a PAC-MAN Mega Tunnel Battle demo, day 2 here with the HUMANKIND demo and as for day 3: you can now play a free demo of the upcoming Immortals Fenyx Rising free, a new exclusive 'First on Stadia' title Young Souls was announced and the strategy game Phoenix Point is coming to Stadia in 2021. Additionally, Stadia's invite system is expanding so that if you do invite a friend to Stadia, that friend will get two months of Stadia Pro free and if continued after the free months you then get a month free too. See the Stadia community post for all the info on that.

So that all sounds pretty reasonable, some nice games coming to Google's Linux-powered streaming service Stadia. Where did it go wrong then? Well, Google are currently enjoying a serious round of bad press and Stadia ended up trending all across Twitter, and not for positive reasons.

The problem was Alex Hutchinson, who according to their Twitter bio was the "Creative Director for Google Stadia" that tweeted out these thoughts:

As a bit of context here, Twitch has caused a lot of issues lately due to DMCA take-downs due to copyrighted music. You can see an overview on The Verge.

The real truth is the streamers should be paying the developers and publishers of the games they stream. They should be buying a license like any real business and paying for the content they use.

Amazing to me that people are upset at someone saying that the creators of content should be allowed to make some of the money from other people using their content for profit.

Not exactly a good look, coming from a person who works for a currently not exactly popular service streaming games. Even worse to post these up with a Twitter bio written like it was, doing more damage than intended to Stadia. However, Hutchinson is not the Creative Director of Stadia as their profile originally said. They actually worked for Typhoon Studios, which Google acquired and then became part of Stadia Games and Entertainment. So Hutchinson works for a smaller game studio that Google happens to now own to make games for Stadia. Hutchinson has since changed their Twitter bio to reflect that more clearly.

The problem though, is that Hutchinson's comments have been widely ridiculed and it caused Stadia to enjoy thousands of angry gamers, developers and publishers all calling out the comments. The original Twitter post has been quote-tweeted (where people quote it and make a direct comment above it) over four thousand times.

It's an easy argument to deconstruct for how ridiculous it is too. Showing off a game is nothing like playing music, or a movie. It's not static content, it's transformed by the person playing it and it's free advertising for the developer and publisher. You need only look at some of the most popular PC games around to see how livestreaming has caused massive surges in people buying those games like Among Us (source): 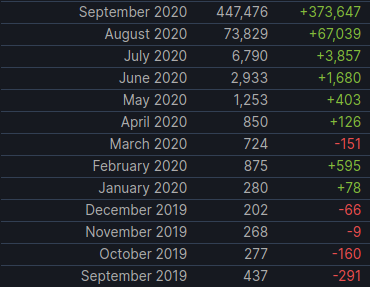 Care to guess when livestreamers picked it up? As another very quick example, here's what happened to Freehold Games with their roguelike Caves of Qud when a single video was done on it, to be clear this is their "whole sales history" (source):

There's plenty of other examples of this but you get the idea. There's a reason why so many developers have blanket statements up approving the use of their games in videos. Most understand it's important, and plenty directly pay streamers to take a look at their game. When talking about huge games from big publishers, most developers involved likely never see a penny from the games doing well anyway - only the people at the top do, which makes it even more ridiculous to want to see more money from people showing it off.

What Hutchinson said doesn't even match up with how Google are working with Stadia either. Google are building in streaming features to Stadia, gave out early access to livestreamers to show off Stadia and more. Google aren't dumb and they've distanced themselves very clearly from Hutchinson in a statement to 9to5Google:

The recent tweets by Alex Hutchinson, creative director at the Montreal Studio of Stadia Games and Entertainment, do not reflect those of Stadia, YouTube or Google.

As someone who personally purchased the Stadia Founders Edition, I have been watching in horror.

We do often include affiliate links to earn us some pennies. We are currently affiliated with GOG and Humble Store. See more here.
About the author - Liam Dawe
I am the owner of GamingOnLinux. After discovering Linux back in the days of Mandrake in 2003, I constantly came back to check on the progress of Linux until Ubuntu appeared on the scene and it helped me to really love it. You can reach me easily by emailing GamingOnLinux directly.
See more from me
Some you may have missed, popular articles from the last month:
The comments on this article are closed.
48 comments
Page: 1/5»

View PC info
It's like he's being paid to make Stadia more unpopular.

View PC info
Yep, more ammunition (as if it wasn't enough already) for Stadia detractors, I can see them buzzing with excitement for this new opportunity.
1 Likes, Who?

View PC info
On the Caves of Qud spike all I have to say is "hey, hey, people". Seriously that man can cause massive spikes in sales it's not the first time he's caused a spike like that for a game won't be the last.
2 Likes, Who?

View PC info
Honestly, i am suprised that all those gameplay/walkthrough videos are not ilegal. How many people decide to watch gameplay instead of pay for the game and streamer got money from it. WTF? This cannot in any way benefit the publisher/developer. YT and others should at least demonetize these types of videos if not remove them completelly. It's like uploading full a movie. But then.. i call YouTube the biggest warez source :) All those full lenght movies uploaed by random people, full lenght movie/game sountracks or other music albums. And the same appliest for full gameplay (not short reviews).

Quoting: X6205Honestly, i am suprised that all those gameplay/walkthrough videos are not ilegal. How many people decide to watch gameplay instead of pay for the game and streamer got money from it. WTF? This cannot in any way benefit the publisher/developer. YT and others should at least demonetize these types of videos if not remove them completelly. It's like uploading full a movie. But then.. i call YouTube the biggest warez source :) All those full lenght movies uploaed by random people, full lenght movie/game sountracks or other music albums. And the same appliest for full gameplay (not short reviews).

View PC info
I am not sure I understand it correctly. Is he implying that the streamers did not pay for the game they are streaming? As in piracy? Or does he want people to pay extra to be able to stream?

View PC info
The thing that separates streaming/youtubing games from music/tv/series, is that a substantial part of it is the input of the player. How much depends on the particular game, but there are youtubers out there that are able to make a game way more interesting because of the way they (role)play it. This makes the whole "rights" question way more difficult. Is the audiovisual output of the game the actual content that you paid for? What if I bought a guitar and put a video out on youtube of me playing the guitar. Should I now owe the guitar manufacturer a licence fee for showing the particular instrument and how it sounds? I'd wager most game devs would rather stay out of this one and take the free exposure instead.
8 Likes, Who?

Quoting: LinasI am not sure I understand it correctly. Is he implying that the streamers did not pay for the game they are streaming? As in piracy? Or does he want people to pay extra to be able to stream?

The second one, like how raido stations pay licensing to broadcast music, he wants streamers to pay a similar charge to be able to stream games.

Lets ignore the fact that multiple big publishers/developers have blanket statements on their websites allowing for streaming / lets plays of their games. The way he was tweeting was from as if it was a giant grey area that hadnt been addressed, yet as I Tweeted to him companies have already granted streamers the permission to do this without any license.

Thats not to say a publisher in the future could change their position and want some sort of license deal, but I can imagine that would be a PR nightmare.
7 Likes, Who?

Quoting: ajgpThats not to say a publisher in the future could change their position and want some sort of license deal, but I can imagine that would be a PR nightmare.

PR nightmare of the century given how many games seem to live and die on whether or not Twitch streamers or Youtubers pick them up. Just look at the sales spike Caves of Qud seen from SsethTzeentach doing a review. This is not the first game he's caused a huge sales spike either, the dev of UnderRail credits him with making the game profitable all of a sudden after he covered it from the spike in sales and interest they seen from it. Mind you he's just a single channel let alone when multiple channels pick up a game.
1 Likes, Who?

Sure, there are a few games that really only have their story and not much else.
It might be imaginable that those actually lose a few sales from people watching instead of playing.
But how many more sales do they get from people becoming interested in the game due to the coverage? Tenfold? Hundredfold? Thousandfold?
11 Likes, Who?
1/5»
While you're here, please consider supporting GamingOnLinux on: