The upcoming metroidvania RPG 'Heart Forth, Alicia' is looking gorgeous

Here's a game I haven't heard of for a few years. Heart Forth, Alicia is an upcoming modern Metroidvania RPG, filled with devious monsters, lethal dungeons, creative puzzles, lively towns & many uncharted wonders.

"On the night of your coming of age trial, the sky rains fire over your village, scorching everything in its path. Soon, you’re catapulted into an ongoing war between the wizards of the forest and the desert army of the West. Desperate to reunite with your loved ones, you embark on a journey across the landscapes of a beautiful but threatening world, sculpted by the pulsing violence of its past."

You will be forgiven if you also forgot all about it, as it was funded on Kickstarter back in 2014 where they managed to get $232,365 in funding. Years later, it's still being developed (as good games take time) and it's really looking promising. In a recent update, the developer posted a new 2 minute gameplay preview: 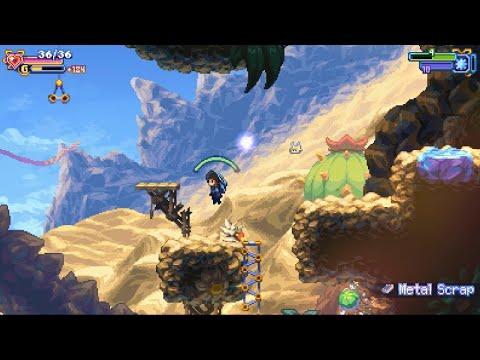 Nice to see that little "Tux" logo for Linux support.

Developed as something of a homage to the classics like Castlevania: Symphony of the Night, Zelda and the narrative found in the likes of Xenogears and Final Fantasy Tactics. However, they say it's a modern take on it all "combining the tight gameplay from the classic action platformers with an epic and serious narrative akin to the iconic '90s RPGs".

It now also has a Steam page up so you can wishlist / follow if you want. Sounds like the release is still quite some ways off, however a fresh Alpha build will be going up for certain Kickstarter backers sometime soon. They're also continuing their regular development livestreams on Twitch.

It was missing from our dedicated Crowdfunding Page, so we've added it there now too.

Quoting: tuubiLooks and sounds really nice. Looking forward to your review of the finished game. :)

I agree. Not sure what makes it an RPG rather than just a metroidvania, but the video looks good to me.
0 Likes

View PC info
I'm currently enjoying the irony that I've spent well over £1000 on a new computer, I'm about to spend another £1000 on scorching new AMD kit, and I'm buying an awful lot of pixel art games. Cos they're genuinely incredible
0 Likes

I know a lot of people with exactly the same story.
I always keep my older middle-class pc, because I know I don't need better hardware most of the time

Regarding the Game, yes the concept sounds very good & interesting and the looks are charming.
Developers with passion deserve support.

By the way is there any way to "late-back" this Game (or pre-order)?

Update: I found a paypal option, which is mentioned on the kickstarter faq.

I console myself with the knowledge that I also play some 3D games that need all the power I have (or more). However, it is somewhat amusing to have put well over $1000 into a machine and then play games that would play just fine on written off (a.k.a., free) hardware from work after my installing a Linux distribution on it.

Of course, I've also upgraded written off hardware from work to make it more usable for the relatives I've given it away to.
0 Likes

View PC info
I got the new MangoHud release working, and it's fascinating to see just how well my PC performs in various games. I know I don't *need* to upgrade, but want to anyway cos who knows what fresh hell next year will bring
0 Likes
While you're here, please consider supporting GamingOnLinux on: