Developer Mike Blumenkrantz has announced that they're now being funded by Valve, so Blumenkrantz's work on the OpenGL implementation on top of Vulkan with 'Zink' will continue.

Hold on, what actually is Zink? As described by Collabora dev Erik Faye-Lund it's an "OpenGL implementation on top of Vulkan. Or to be a bit more specific, Zink is a Mesa Gallium driver that leverages the existing OpenGL implementation in Mesa to provide hardware accelerated OpenGL when only a Vulkan driver is available".

After working on Zink for a while, Mike Blumenkrantz posted a blog entry back on November 6 saying it was the "last day" due to the end of it being hobby work while being between jobs. In a new blog post titled "Don't Call It A Comeback", Blumenkrantz mentions that "Valve has generously agreed to sponsor my work on graphics-related projects" and that the focus will be on Zink.

The plan for Zink is a big one and things are moving quickly. Working together with Collabora developer Erik Faye-Lund, together they're doing "Operation Oxidize" to get the majority of their work in progress code for Zink into mainline Mesa by the end of the year. This will give Zink basic OpenGL 4.6 and OpenGL ES 3.2 support along with "vastly" improved performance.

Nice to see Valve continuing to get involved with open source and Linux to improve all sorts of areas.

For those curious on the question of why — well, Vulkan is the future. This video can explain it in more details: 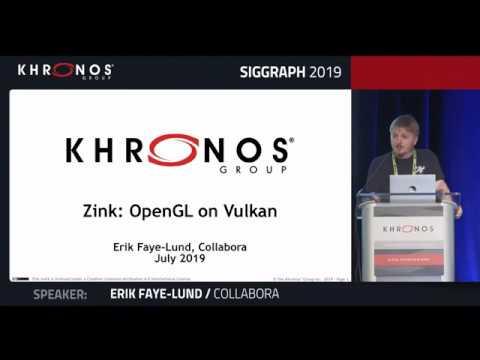 Acutally, will this also work on top of Nvidia driver ?
0 Likes

Let's hope so, Nouveau can always use more love.
0 Likes

Let's hope so, Nouveau can always use more love.

In which Nvidia itself is in short supply of.. Why exactly do they NOT help? What is the use of a closed driver anyhow in this day and age?
2 Likes, Who?

View PC info
I hope this can be brought to windows one day because AMD opengl driver on windows sucks. It's amazing how much faster linux is compared to windows like tri force heros on citra goes from 15 fps to 60 fps or my friends 1050 ti beating my vega56 in cemu when on windows before they added vulkan
0 Likes

titi 24 Nov, 2020
View PC info
That's really good news! This will allow a lot of old games to survive which are/were based on OpenGL. Who knows how long OpenGL drivers are provided for new graphic cards! Just Vulcan drivers in the future maybe. But that's good enough if Zink hopefully will fully support OpenGL one day.
0 Likes
TheRiddick 25 Nov, 2020

View PC info
Is Apple ditching Metal API? I heard it has been left in the dust and the games that do run on it don't perform too well.. this is why you embrace open standards!
0 Likes
Whitewolfe80 25 Nov, 2020

Quoting: TheRiddickIs Apple ditching Metal API? I heard it has been left in the dust and the games that do run on it don't perform too well.. this is why you embrace open standards!

I don't think they have announced anything but the new apple cpus are ARM based and are APUS with apple enhanced versions of mali so gaming is not really their focus. The apple silicon has the Vram for the system on the CPU its as far removed from x86 architecture as it can get according to linus.
0 Likes
TheRiddick 25 Nov, 2020

View PC info
There are some Mali APU's (GPU) that do quite well at 3D graphics now. But typically that is done on Vulkan API. Snapdragon is the APU that has the most GPU performance currently but I don't think that is part of ARM?
0 Likes

View PC info
The GPU in the M1 performs at roughly the level of the 1050 Ti. Later models, or models in machines with a higher power budget, are likely to get more performance.

Apple aren't going to move away from Metal unless they come up with something else that they completely control. They control the full hardware stack, the OS, the APIs, and the tools that devs are able to use. They can change any of them at will to benefit what they want to do with the Apple ecosystem.
0 Likes
TheRiddick 26 Nov, 2020

View PC info
yeah its a imprisoned ecosystem/market.. Just like how some of their manufacturing process employ forced labourers. Model is through and through.... lmao


Last edited by TheRiddick on 26 November 2020 at 9:00 pm UTC
0 Likes
While you're here, please consider supporting GamingOnLinux on: