Okay, now this is quite impressive. Tristam Island is a text adventure designed like old Infocom works and it's playable across more platforms than you might expect.

Developed by Hugo Labrande using modern, open source tools on Linux so naturally it has first-class Linux support. However, it's also available on over 30 other platforms too. From Linux to Windows, Amiga to Spectrum and even some calculators can run it. The technical details of it are just as impressive as the adventure you go on. The developer also supplies the plain ".z3" file to run in your favourite interactive fiction interpreter. It could run pretty much anywhere.

"After crashing your plane at sea, you end up drifting to a small island, with not much to survive. You explore, and find out the island was inhabited, years ago. But why did the people leave? And why is there a fence around the white house at the top of the hill?" 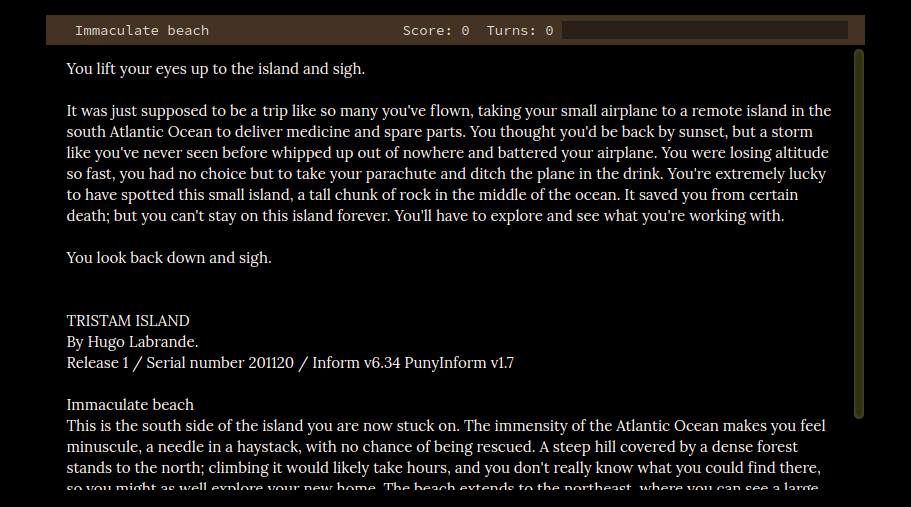 Pictured - Tristam Island on Linux with the supplied Lectrote IF interpreter.

While it's designed like a retro game, it's made with plenty of modern game design elements. Labrande mentions they tried to remove many of the frustrations commonly found in 1980s text adventures with "no hunger timers, no frustrating mazes, no blocking situations that force you to restart".

Does anybody have other recommendations in the quality and size of Thaumistry or even Hadean Lands?
0 Likes

Does anybody have other recommendations in the quality and size of Thaumistry or even Hadean Lands?

Hadean Lands is great. It has a way to make you really feel like you did something smart when you figure out a puzzle.

Not parser-based, but have you ever tried any of the Choice of Games titles like Heroes Rise: The Prodigy?
1 Likes, Who?

Quoting: rustybroomhandleNot parser-based, but have you ever tried any of the Choice of Games titles like Heroes Rise: The Prodigy?

The freedom of just typing what I want and the illusion I could do anything is what makes me playing such games, so I didn't look deeper into Choice of Games than trying a demo. Thanks for the suggestion!
1 Likes, Who?

Man, I played a lot of Infocom back in the day and loved them. This sounds cool but I am not sure how it would compete with everything in my backlog

View PC info
When I first had my own internet connection in late '96, I was pleasantly surprised by two things I'd previously been unaware of: there was still an active community around the old 8-bit home computers, and Graham Nelson had reverse-engineered Infocom's Z-Machine.

That said, I've always been rubbish at these things. 24 years on, and I've still never finished Jigsaw). (24! The ten years or so since Infocom's heyday seemed a long time back in the mid-'90s.)
1 Likes, Who?
While you're here, please consider supporting GamingOnLinux on: