After what they say are countless hours of work towards it, TUXEDO have now launched their own XMG FUSION 15 with full Linux support and they're supporting people who purchased it elsewhere.

What's also known as the Eluktronics Mag-15 or QC7, it's a very popular Intel and NVIDIA powered laptop that TUXEDO said was done out of "numerous requests for Linux support". Not only are they directly selling their own XMG FUSION 15 - powered by TUXEDO, they're also providing all Linux drivers and anything else needed to ensure "full compatibility" retroactively for all customers who own one from any vendor be it the XMG FUSION 15, Eluktronics Mag-15, Aftershock / LEVEL 51 Vapor 15 Pro or the MAINGEAR ELEMENT. If you do own one, take a look here for info. 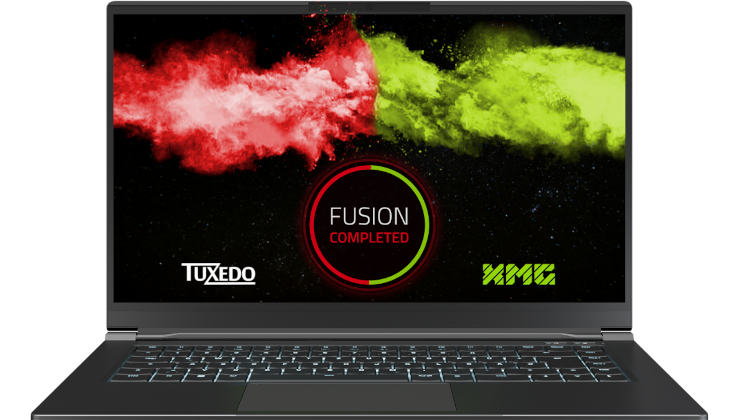 As for TUXEDO's own unit, it's available to buy right now from their online shop. The design is the same, other than them replacing the Super / Windows key with their usual TUX keycap. Specifications:

TUXEDO mentioned that their driver package ensures "full keyboard support including hotkeys, several different fan profiles and seamless graphics switching between the Intel iGPU and the dedicated NVIDIA GPU, while self-developed software solutions, like the TUXEDO Control Center, enable the selection or creation of different performance profiles according to the user's preferences and use cases". They also mentioned their web-based setup system called TUXEDO WebFAI and their myTUXEDO cloud services which they say "meet the highest German data protection standards".

Speaking to TUXEDO Computers, curious about how the partnership on this happened and how they're able to use the XMG name they explained that:

XMG aka Schenker Technologies and we share some kind of company partnership, as we also partly use the same logistics and production infrastructure. Therefore this was some kind of collaboration on this model which on the one hand resulted in sharing our Linux driver packages with Intel QC71's customers, like XMG FUSION 15 or Eluktronics Mag-15 owners.

On the other hand we added XMG's FUSION 15 to our portfolio as well with full TUXEDO service & support under the name "XMG FUSION 15 - powered by TUXEDO".

If interested you can find it on their store here. The base price is €1,349.

View PC info
I like the overall design, I like how it doesn't scream gaming laptop. Though, right about now im starting to wonder why am i not seeing laptops with amd dGPUs, It would have been great to see this with one, Linux wise id be less headaches.. but good design tough.
0 Likes
setzer22 1 Dec, 2020
How can they ensure full compatibility? We're talking about an Nvidia Optimus laptop here...

Can they make it:

- Tear free?
- Able to suspend and resume without any graphical glitches?
- Able to hibernate at all?
- Not drain battery powering the GPU when it's completely idle?

Wow! They must be closely working with Nvidia then :^)

I literally don't understand why those laptop manufacturers fail to understand their market at such a simple conceptual level. Nvidia is not linux friendly, if you bundle nvidia cards with a laptop, you can't be linux friendly... *sigh*
0 Likes
innuendo 1 Dec, 2020

Those were my thoughts too... imho no linux user should buy/support nVIDIA anymore, and here's why:

The oldest reference to "nVIDIA Optimus" I could find is from early 2010... it's been 10 years already and linux support is still lacking... There's that famous quote from Linus Torvalds (when he expressed his "love" for nVIDIA), which i won't repeat here... TBH at the time i didn't agree with him, i thought it a overblown reaction to a minor issue... years later I'm humbled and have to admit he was 100% on spot!
For the longest time, there were no good alternatives to intel and nvidia wrt cpu and gpu (even more so in the mobile sector), but since ZEN and RNDA good alternatives are here at last.
Today Optimus is everywhere (even on the Desktop) thanks to intel and and nvidia (it still requires extra effort to find good laptops w/o intel (and nvidia)), so if you like using linux you should vote with your money (vocally express your reasons now and then too) and avoid nVIDIA and intel if possible.

My first hand xp with optimus on linux ended about 3 years ago? I had "bumblebee"
working for the longest time... at least until it broke down for various reasons:

Considering the Devs hat no support whatsoever from intel or nvidia, bumblebee did an amazing job of making "nVIDIA Optimus" accessible to linux users (I know about the performance impact it incurred, but it was a "works as intended" solution).

So after many years the community support for "Optimus" broke down, and the only news from nvidia was still "we're working on it... maybe... a little bit."
Yeah well, you know what nVIDIA? What Linus said...

AFAIK since end of 2019 there's supposed to be PRIME render offload;
Will this work on XMG Fusion and Ubuntu 20.04? Anyone with first hand experience who wants to elucidate on that? (@gamingonlinux) Maybe make that (optimus offload) a full article even?
0 Likes

Plintslîcho 1 Dec, 2020
View PC info
I'd rather like to get a laptop with an AMD CPU/GPU. But alas, no chance getting one.

Having experienced from first hand this prime render offload "support" (I'm writing from a machine that's used it for a long time), let me expand a bit further on the state of things (of course YMMV, I only got my computer to test this...):

- Things like screen tearing on whatever the nvidia card is rendering are still unsolved to this day. You have just learn to live with it.
- There is no power management for cards older than the 2XXX series (neither for low-end 2XXX cards). This means the nvidia card will not shut down when not being used. This, on practice, means my laptop has *less than half* the battery life time on linux when compared to Windows (~1.5hr vs ~3.5hr).
- There is still no support for reverse prime. That is, when one of your HDMI ports is wired to the Nvidia GPU directly (that's common in some high-end gaming laptops), you cannot use this technology at all. The only way to get output on the HDMI screen is to use the nvidia driver for all the rendering, and just shut down the intel card entirely. If I choose this route, my battery life drops down even further, to just ~45 minutes. Since most laptops have at most two external screen ports, this literally means you're forced to choose between nvidia prime render offload and multi-monitor support (or you can use the tiny laptop screen as a 15" secondary monitor).
- There is bad hibernation / suspension support: When you resume your computer, you may be faced with either severe graphical glitches (an application restart sometimes solves it), or a complete, irrecoverable system-wide freeze, only fixed by a restart. This, in practice means I cannot suspend or hibernate my machine. It's always a shut down or leave it on for long periods of time.

Anyway, thought I'd share my pain and struggle. To see if it helps deter even more people from falling into the trap of these "Linux-compatible" nvidia laptops.
0 Likes
innuendo 3 Dec, 2020
One thing I forget to put in my first comment:
I'm highly sympathetic to companies like tuxedo computers who try to provide hardware (and support) for linux users; with this in mind, I'm emotionally split 50/50 when I see offers like this one, upfront I'm happy about it but when it turns out to be another "optimus"-machine I get annoyed/angry/disappointed.

Yeah well... that was more of a look into the past with "optimus" on linux.
The thing that really gets my hackles up: "The community" kinda fixed nvidia's blunder with bumblebee, made it usable for years and when that hack fell apart at last, there was still nothing from nvidia.
The only remaining solution was "nvidia always on" (with user session switching) which outright destroys battery life.

Quoting: setzer22Having experienced from first hand this prime render offload "support" (I'm writing from a machine that's used it for a long time), let me expand a bit further on the state of things (of course YMMV, I only got my computer to test this...):

Anyway, thought I'd share my pain and struggle. To see if it helps deter even more people from falling into the trap of these "Linux-compatible" nvidia laptops.

Thanks for sharing, so in effect still a half-baked solution at best... Seems "nvidia always on" is still the "best" (what a sad joke) solution.
Also not to forget the threat of being abandoned (with all those problems) by nvidia once they declare your gpu "legacy" and remove it from active development/bugfixing.
0 Likes
While you're here, please consider supporting GamingOnLinux on: