Always sad when a Linux-focused business fails. ZaReason announced recently that they're no longer in business.

ZaReason aren't even a name that was heard all that often, which is part of the problem. You hear a lot about System76, TUXEDO, Slimbook, Star Labs and other Linux vendors but ZaReason gradually reduced their output and now we know why.

In the statement they sent out it mentioned how their product line was getting smaller and their tech support was "slowing down to a crawl". So what happened? Well, "the pandemic has been the final KO blow" they said with their "little town" being hit hard and they've been unable to recover from it. They officially shut on November 24, 2020. No other reasons were given but it's likely increased competition from the previously mentioned vendors plus the likes of Dell, Lenovo and others in the Linux space also not helping them.

Thankfully, we do have plenty of hardware support now in 2020 so it's not a big problem.

Their website is now just a blank page. You can see the full statement they sent out to people below: 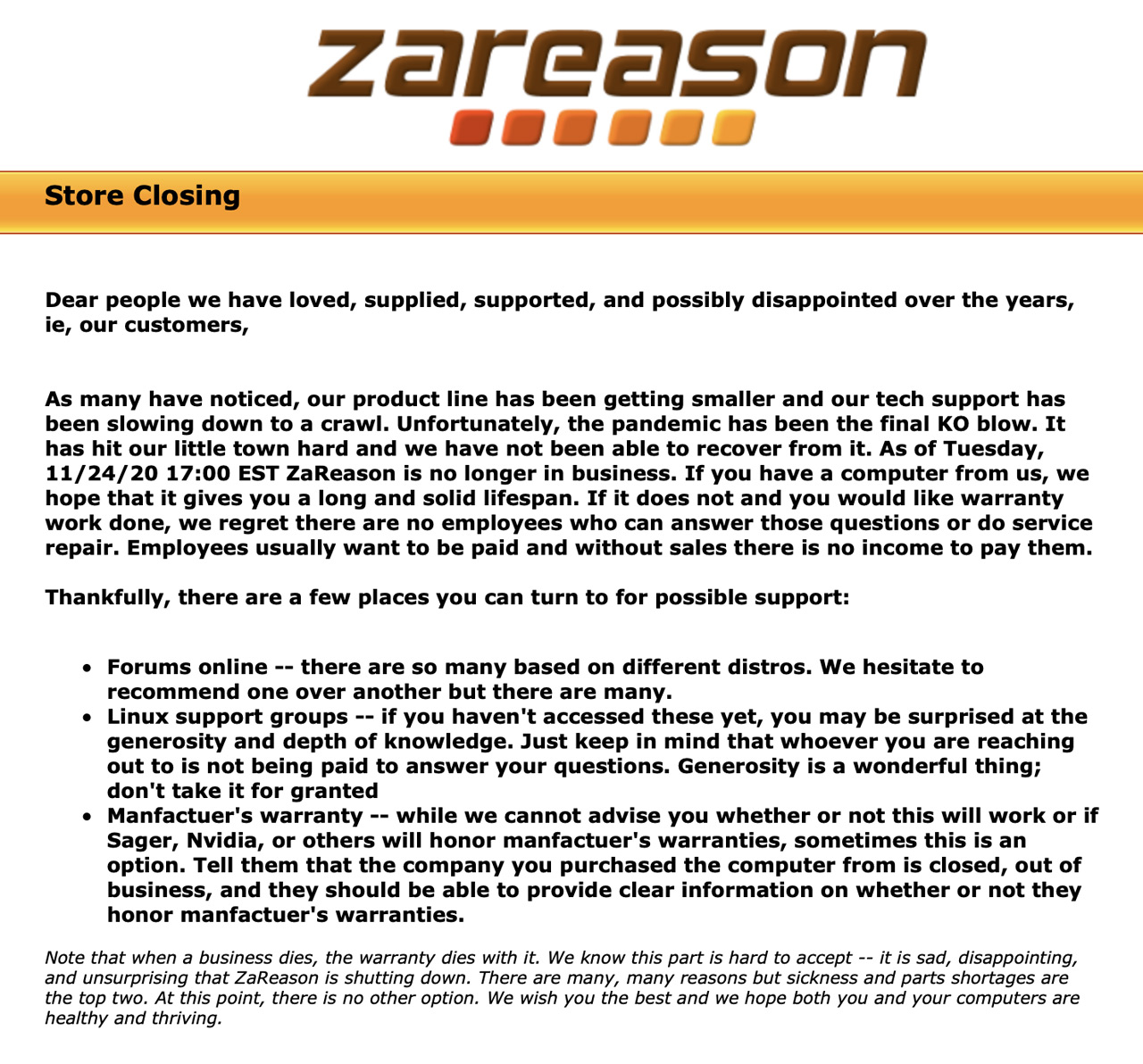 View PC info
First time I hear about this shop at all. Still no idea where it was located. EST is a hint but that's it.
4 Likes, Who?

Quoting: bekoFirst time I hear about this shop at all. Still no idea where it was located. EST is a hint but that's it.

Never heard of it either. The date format is a hint as well. The problem with US stores is that when you've added tax, shipping and customs fees, it's not really worth it. So not that surprising that US stores remain fairly unknown in Europe.
5 Likes, Who?

View PC info
That’s a damn shame. I would have never been able to afford their computers any more than those of System76 (shipping and customs definitely not helping), but it was still a part of the ecosystem. Hopefully the silver lining will be that System76 and other Linux-dedicated brands have a bit less competition and can better hold their own against Dell and Lenovo.
0 Likes

View PC info
Its a shame to see them shut down, but not unexpected. There's not a lot of room for more small computer vendors when you have to compete with Dell, Lenovo, HP, and System76 in the US.

They also hadn't been putting themselves out there, so to speak; when I bought my most recent laptop, Zareason wasn't even on my list of contenders. Contrast that to System76, which has been making waves for awhile.
0 Likes

View PC info
I personally find it hard to be sad to see them go. I purchased a laptop from them a few years ago that almost immediately (Within the first week) started developing screen issues, and when I inquired about it via their support, I received only silence.

The laptop ended up dying with little explanation a couple of months later.

Quoting: EhvisNever heard of it either. The date format is a hint as well. The problem with US stores is that when you've added tax, shipping and customs fees, it's not really worth it. So not that surprising that US stores remain fairly unknown in Europe.

Still, System76 is known (by word, at least). So sounds to me like PR department did something horrible wrong (or not at all).
0 Likes

View PC info
It's always sad to hear about a longtime vendor, in any field, falls by the wayside, even when I've never even heard of that vendor. A moment of silence, then, for a fallen Community business ...

It's almost inevitable that small boutique start-ups will be swept aside by bigger, more powerful players enter their market. But bigger players only ever entering the market because they smell money. So, while it saddens me to see Zareason slip into history, I'm heartened for the future of Linux by the presence of Dell, Lenovo, and System 76. It says to me that Linux is hearty and healthy and spreading.

View PC info
Never heard of them not sure what sort of orders they would of needed to stay open but the fact nobody seems to of heard of them save one person and even they had a bad experience I would suggest that nobody is going to notice.
I would love a system 76 desktop but way to expensive for hardware inside especially once you apply customs tax to the postage costs.
0 Likes

View PC info
Damn. I usually get my stuff from System76 but I saw them listed all the time on https://linuxpreloaded.com/ RIP ZaReason.
0 Likes
1/2»
While you're here, please consider supporting GamingOnLinux on: