Crumble from BRUTE FORCE is a fast-paced 3D physics platformer, one that released with Linux support on December 4 and it's pretty awesome. Note: key provided by the developer. A game I've kept an eye on for some time now as the demo and earlier footage was promising, thankfully it lives up to what I wanted from it and then some.

You control a funny little rolling face with a very long and sticky tongue. Not only are you rolling around these 3D levels with immense speed, you're also something of a Spider-Man — or Spider-Face? I don't know what to call them but it's so ridiculously charming that you need to play it.

As you progress through you will see just how varied and challenging the game actually is, especially if you're trying to go for speed and beat some times that other players have set. For me, I'm just focused on not constantly falling off because sometimes you can almost feel the intense speed. You're going to need that sticky grapple-tongue for sure, as there's times where the world around you is breaking apart. It's a physics platformer, and it makes use of the physics systems rather well without completely overdoing it where it becomes a chore. Here, it's just fantastic.

Quite chaotic at times too. You're going so fast you can easily miss where you might need to swing from, however there are some secret platforms or other props spread throughout to keep you going so you can cling on and propel yourself forwards some more. There's been quite a lot of times where I've been at the edge of my seat, as I swing from tree to tree and desperately try not fall.

The character is adorable too. What is it about sticking silly faces on things that we all end up loving? 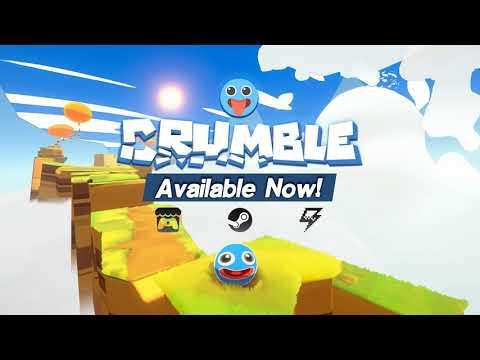 It brings back memories from the likes of Super Monkey Ball a little, along with Sonic, a sprinkle of Spider-Man and plenty of other classics wrapped up in a family-friendly visual style and tons of fun to be had. Possibly one of the most devilishly charming games I've played in 2020. An absolutely solid addition to the 3D platformer genre and well worth a look.

Buy Crumble on itch.io and Steam.

View PC info
This one reminds me of the old 16-bit title, Trailblazer, but mixed with SEUM-style graphics. I love the destructive terrain too, which also reminds me of Samsai's twitch run a couple of years back... cluster trucks... I think it was called Cluster Trucks?

Might have to pick this one up. It looks great!
1 Likes, Who?

Quoting: scaineThis one reminds me of the old 16-bit title, Trailblazer, but mixed with SEUM-style graphics. I love the destructive terrain too, which also reminds me of Samsai's twitch run a couple of years back... cluster trucks... I think it was called Cluster Trucks?

Might have to pick this one up. It looks great!

Yeah, I was thinking about Cluster Truck too at first, until I noticed that it is not first person view, you actually control the little blue thingy from third person POV...
1 Likes, Who?
While you're here, please consider supporting GamingOnLinux on: