With a rather unassuming and plain case that doesn't give much away, the new TUXEDO Book XP14 is their smallest and lightest gaming notebook now available. 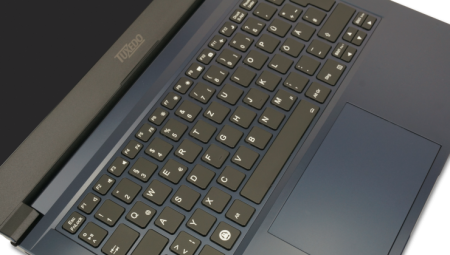 Coming with Intel Tiger Lake processors with either the Core i5-1135G7 or the Core i7-1165G7 it's backed up by their new Xe graphics, you can also upgrade it to have an NVIDIA GeForce GTX 1650 if you want that extra bit of power for your gaming needs.

Not only does it have ample power, it also has a speedy 14" 120Hz screen along with a matte finish to help keep away as much glare as possible to be usable in various lighting conditions.

The included 49 Wh will give around 6 hours of usage according to what TUXEDO state, although that will obviously go down based on what you're doing with it. There's plenty more to appreciate with it, check out some specs:

As usual for this company it comes as standard with TUXEDO_OS, which is based on the latest Ubuntu release with the Budgie desktop as the default. They do also offer it with a standard Ubuntu install.

Quite an affordable notebook too starting at €865.50. For the specifications, the compact size and having full Linux support out of the box from a known company it seems like an ideal machine. TUXEDO stated in their email that shipping is expected to begin at the end of December 2020.

About the author - Liam Dawe
I am the owner of GamingOnLinux. After discovering Linux back in the days of Mandrake in 2003, I constantly came back to check on the progress of Linux until Ubuntu appeared on the scene and it helped me to really love it. You can reach me easily by emailing GamingOnLinux directly.
See more from me
Some you may have missed, popular articles from the last month:
The comments on this article are closed.
33 comments
Page: 1/4»

View PC info
I see all kind of good choice and compromize in the hardware which makes it a decent price for what if offers.

Usually I find the tuxedo a bit too expensive, but here it's pretty good because you get the GTX1650 and an i5. 8gb of ram is sufficient despite what many can think, and it can be upgraded later if really needed.


Very good offer with low power consumption also and you can bring this computer everywhere with you and do improvised lan parties :p

And the 1080p nonsense in 13-14-15" screens is baffling. Linux has no functional fractional scaling and those screens should not exist.
1 Likes, Who?

View PC info
Maybe lightest, but I have a 14" Tuxedo gaming laptop sitting in from of me right now...
0 Likes

Why? It's the worst ratio ever. I'm glad that it died.


Quoting: damarrinthose screens should not exist.

Why? The resolution is too high? Or too low? I have a laptop with an 11" screen and use no scaling at all.
0 Likes

Edit: Never mind, they seemed to have 15" AMD GPU laptops, why didn't I see these before the Black Friday... :'(

Ah I wish they would open them. They opened for their embedded ones, maybe with a bit of pressure from Intel/AMD (they will be the only closed source option at the end of 2021) they will finally open their kernel/vk drivers. It's sad too, tech wise, I'm all Nvidia, many of what they do on that aspect is awesome.
But, just opening kernel + vulkan driver would not kill them. You can still hide all the secret sauce in fw + cuda framework, vulkan driver itself is really not a big secret I think. Power management and co either. As for DLSS, AMD pose no threat since they don't have the basics to exploit it, but it's true I would be afraid of Intel probably more versatile graphic cores, so I understand they want to keep it closed. But still, I wish they would open up a bit more on that too, a bit of doc, all headers etc. And at least contribute to Proton for it.

Is not bad when you factor the graphics card.

Only thing I still don't quite get, why not use magnesium chassis, which is their signature I'd say, more ? Instead of using plastic ... I'm more disapointed by that.
Still waiting on 15" infinity book to pull the trigger, if you want to make me happy Tuxedo Santa: 25w TGP for XE and full dual channel (non soldered) would make me very happy. Magnesium and less than 1,4 would be golden.
0 Likes

Quoting: damarrinAnd the 1080p nonsense in 13-14-15" screens is baffling. Linux has no functional fractional scaling and those screens should not exist.

Care to elaborate? I have a 13.3" display with full HD resolution. Works perfectly ok.
0 Likes

Dells have 16:10 screens.
1 Likes, Who?
1/4»
While you're here, please consider supporting GamingOnLinux on: