WHAT THE GOLF? is a good question and a highly amusing game

WHAT THE GOLF? A game created by Triband who clearly have no idea what Golf actually is and as it turns out, they created a game that's pretty amazing. Note: copy personally purchased.

Funded originally on the Fig platform back in 2018, it later turned into a timed Epic Games Store exclusive in late 2019 and eventually a Steam release happened in October 2020. Linux support came just a bit later but now I've had plenty of time with it to give it some thoughts.

So what is it, if not Golf? Well, that answer is somewhat complicated. It's hilarious though, thoroughly entertaining but deciding on what type of game it is has proven difficult. It's something along the lines of a physics comedy title that has a basic inspiration from the idea of Golf - to hit something across somewhere. Look, describing it is hard okay. It's completely stupid but oh so brilliant. 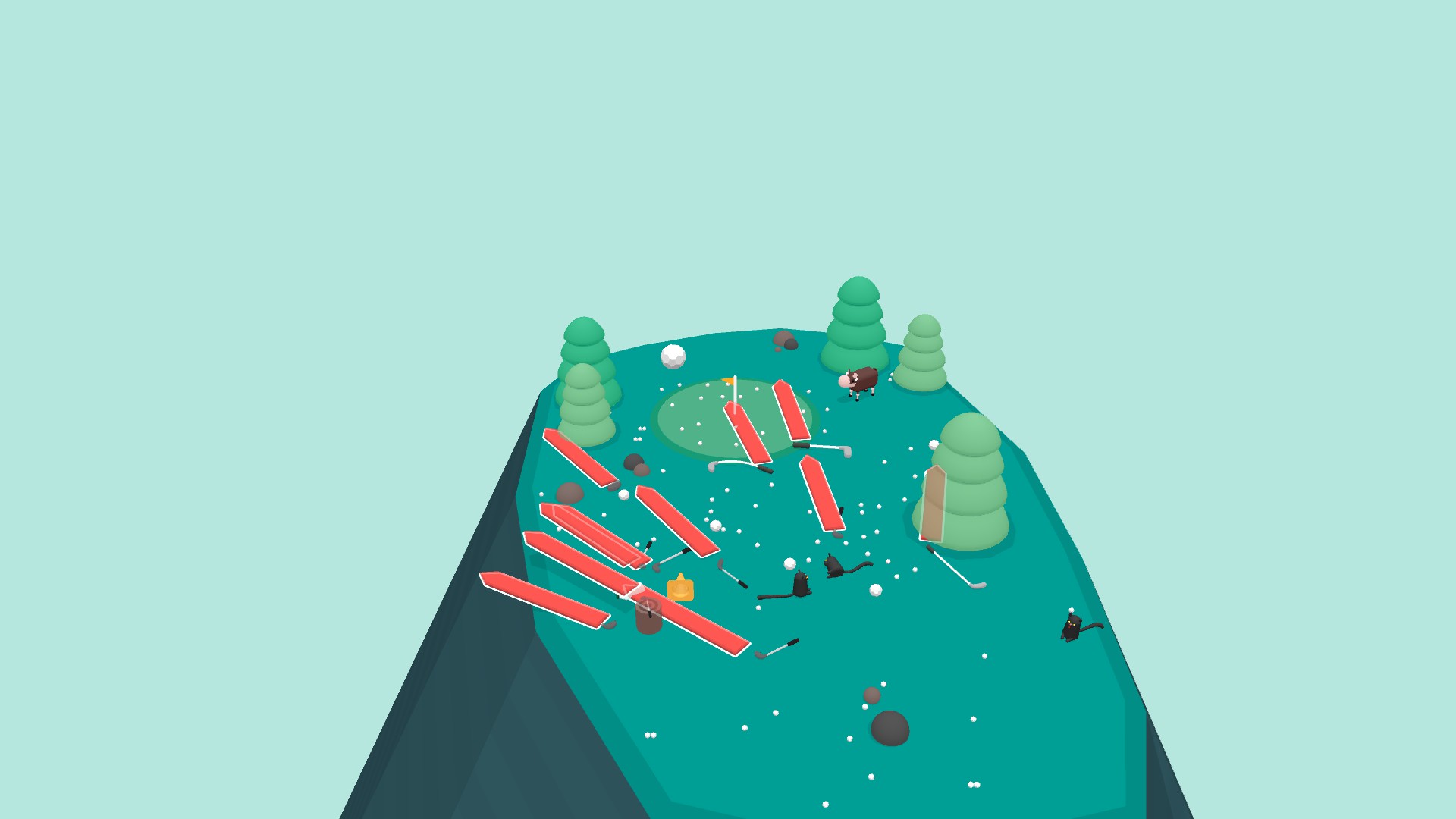 WHAT THE GOLF? is as if Triband said "what about Golf, if we added in mechanics from everything else and mashed it together as if you're in a Portal-like testing chamber". I couldn't help but constantly smile, chuckle and sometimes just laugh out loud at some of the levels. The various mechanics constantly mixed in and blended together are a real joy as are the constant little puns and joke level names.

You could easily go into WHAT THE GOLF? expecting something slightly silly that wears thin after an hour or two, but thankfully it's clear here that Triband put in a lot of effort to not be a gimmick game. It's fun from the start, and continues to grow on you as you ace the various challenges.

Sometimes you're a Golf ball, the hole, a club, a bouncy ball, a house, a chair and much more. Yes, you will be throwing around all sorts of things and it just keeps getting more ridiculous as time goes on. The list goes on for a while and some of it is seriously inventive, like a flower vase which you need to first gently tap onto its side so you can roll it along without breaking it.

There's also quite a few clear parodies included too. Super Mario Golf? Yep. Angry Bird Golf? There's that too. You even get a Lunar Lander parody included. WHAT THE GOLF? is a game that just keeps on giving.

Once you've got the basics down, you go back to every single level and go through two extra challenges on each. You need to do this eventually anyway, as it unlocks more of the game. Some are a genuine challenge, others just so completely ridiculous but it shows just how much attention the game has been given to be worth playing through. I will admit that some levels took me quite a long time to get right, infuriatingly so at certain points. One particular challenge involving an exploding barrel and a sheep really took me forever to solve. Trying to roll a barrel instead of a ball, that is on the verge of exploding while you're also trying to race a sheep to the flag - it took some nimble finger-work for sure. Like all levels in the game that give an actual challenge though, it felt awesome once finished.

Aside from the single-player content which is great WHAT THE GOLF? also has co-op support, a level editor, daily challenges and more. Back in December 2020 the developer also released a free snowy content update adding in a bunch of extra levels. Always nice to see post-release content.

WHAT THE GOLF? is a game that you need to play if you perhaps overlooked it. Family friendly even, not that a younger audience would get half the jokes but they can easily enjoy the absurdness of it.

If I had actually played it last year, it would have easily made my best 2020 Linux games list, I almost feel ashamed I left it this long. An easy recommendation to pick up. Absolutely brilliant. Go buy it. The Linux version has worked flawlessly in my testing both with mouse and gamepad - no issues.

You can buy WHAT THE GOLF? for Linux on Steam.

View PC info
Bought it as soon as it got released on steam and a Linux version was announced.
Started the game via proton, though Linux version released a few days later. Had a minor save files issue with steam cloud but nothing worrying.

It helped me cope with very difficult times and kept going around october/december until I could settle things out in my life.

More recently, I finished the main campaign, the sports campaign and latest free update winter campaign. Unlocked every achievements including daily challenges and despite 10h and 10k strokes ones being boring.

Can't recommend enough, it's fun to play and sometimes even hilarious.
0 Likes
While you're here, please consider supporting GamingOnLinux on: