Getting increasingly more useful and powerful, the open source game engine GDevelop has another new version up with the first iteration of support for tile-based maps.

It's in the experimental stages, so there's plenty of limitations but the work is in and will expand over time. Currently, it supports pulling in maps made with Tiled, a general purpose open source tile map editor for all tile-based games. A pretty huge addition when you think about all the games that have tile-based maps, probably a lot more than you realise. Having out of the box support for it, even in the early stages, is quite important. 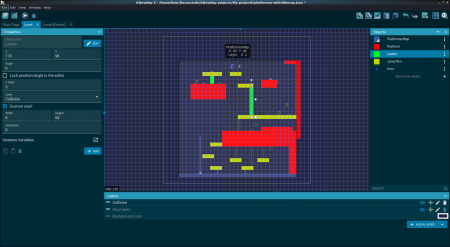 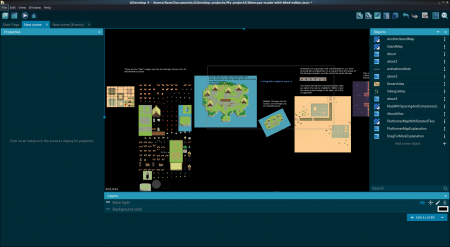 Pictured - two examples included that show off some of the new tiling features.

Movement behaviours expanded with the latest release too, adding in a new isometry movement option. There's also a new procedural generation example included, their search bar improved again when adding an action/condition to search in all the existing actions and conditions and there's lots of bug fixes too. One big game engine change was done for this release too, with it now all written in TypeScript which they say "makes the game engine and the extensions more robust, preventing bugs and regressions".

Want an example of what was made with it? Hyperspace Dogfights was, which is a juicy jet-combat rogue-lite.

fagnerln 2 Feb, 2021
View PC info
They should expose the licensing on their site, it's nice the MIT licence on games developed.

And it's really nice that gdevelop export games to appimage, it's a big plus for Linux.

I'll try it sometime later, but event driven feels a bit limited, or makes things more confusing than they should be, at least is what I remember of when I was kid playing with Multimedia Fusion.
0 Likes
While you're here, please consider supporting GamingOnLinux on: