Steam hits yet another all-time high for users online with over 26.4M

Something which is becoming a regular occurrence lately: the Steam store broke its record for concurrent online users once again with over 26.4M online.

We can grab the data easily thanks to the excellent SteamDB resource, which showed that the new peak came in at 26,401,443 around 3PM UTC on Sunday. At the same time around 7.3M people were actually in-game too with Counter-Strike: Global Offensive clearly leading the player tables as usual with that game alone having well over 1M people.

At this point it can't really be put down to any one single thing, but the biggest factor is likely still the COVID-19 pandemic with many more at home. The overall numbers for Steam have been rising steadily again since July 2020 as shown by the "Lifetime concurrent users on Steam" graph provided by SteamDB. 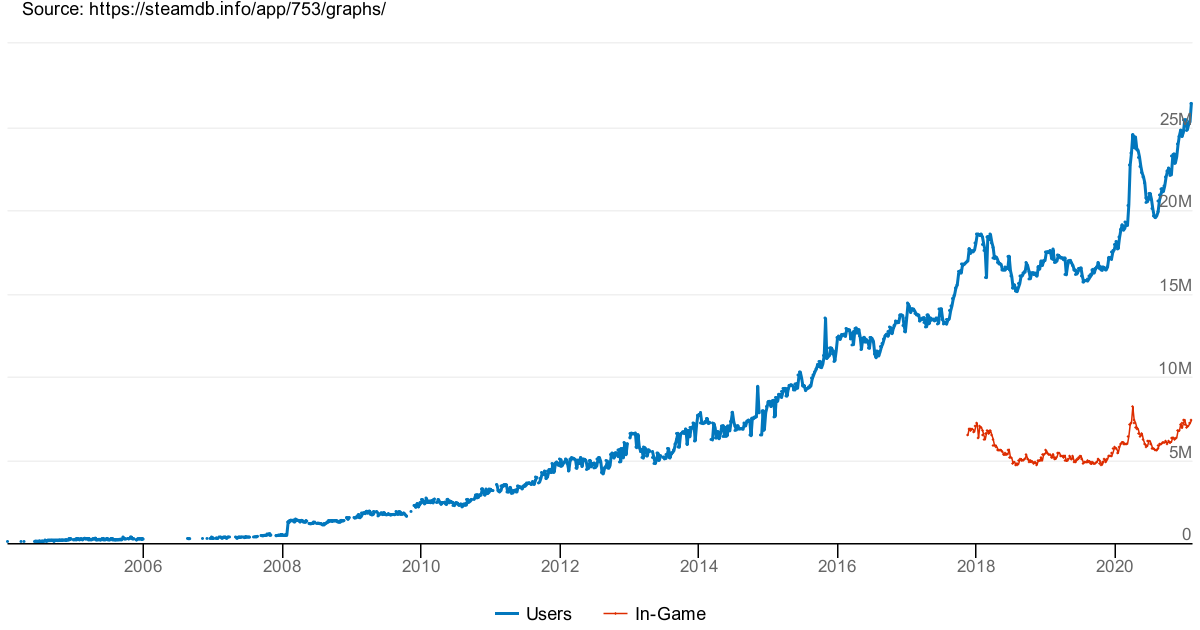 It was also only recently that Valve announced they hit over 120M monthly active users too, and they have plenty of Linux-related work ongoing with some exciting stuff planned. We think we know what one of their plans might be too.

We do often include affiliate links to earn us some pennies. We are currently affiliated with GOG and Humble Store. See more here.
About the author - Liam Dawe
I am the owner of GamingOnLinux. After discovering Linux back in the days of Mandrake in 2003, I constantly came back to check on the progress of Linux until Ubuntu appeared on the scene and it helped me to really love it. You can reach me easily by emailing GamingOnLinux directly.
See more from me
Some you may have missed, popular articles from the last month:
The comments on this article are closed.
10 comments
mphuZ 8 Feb, 2021

The record will be updated again soon. Tomorrow will be the official launch of Steam China...
1 Likes, Who?

View PC info
Anybody remember what the high peak (especially in-game) for early 2018 was related to?
0 Likes

Quoting: EhvisAnybody remember what the high peak (especially in-game) for early 2018 was related to?

Wasn't that PUBG-ish ?
I remember it was so popular when officially launched (around december 2017), it got many people on steam, pre-fortnite battle royale hype (it came 6 months or so later).
Seems consistent with the Steam DB charts, 3.2M simultaneously in-game (PUBG) by Jan 2018.

View PC info
Thus far, the Epic Store, Stadia, etc don't seem to be blunting their growth as yet. Go Valve!
0 Likes
Purple Library Guy 8 Feb, 2021
The "actually in game" number is less than a third of the "on Steam" number.
What on earth are all those people doing on Steam when they're not playing games?

I'll usually just have Steam open throughout the day, because even on my beefy gaming rig with an SSD it takes a good 10 seconds or so to start up and on my free days I'll often be doing a mix of playing games and other things, so it makes way more sense to leave it open rather than shutting it down every time I finish a game. Hence lots of my time would be "on Steam" but not "in game". I know I've seen people complain about system resource usage, but…well, see "beefy gaming rig". I've never had a problem with it.
2 Likes, Who?
kuhpunkt 9 Feb, 2021

Chatting, waiting for other people to show up.
0 Likes

Quoting: Purple Library GuyWhat on earth are all those people doing on Steam when they're not playing games?

I'm actually quite often guilty of that. Opening the client to check if a new interesting patch is out, browsing the store, checking out new releases, all that jazz.

A break while working or something, can't game but can drool. :)


Last edited by Beamboom on 11 February 2021 at 10:50 am UTC
0 Likes
While you're here, please consider supporting GamingOnLinux on: