Valve are trying to give developer a bit more data on what controller / gamepad they're using, which is a good reminder for developers to make sure they are testing for more than just a mouse and keyboard.

In the announcement, Valve mentioned how "48 Million players have used a controller in a game on Steam, with about 10% of daily game sessions being played with a controller" - that's a lot of people, and of course it does heavily depend on the genre.

Showing off some sample data from the new reports system, it gives developers a pretty nice clear picture of what hardware people having in their hands (or could have, if developers added better support). Developers will see how many people have played their game with a gamepad, it gives a little league table of popularity to show what exact controller players have been using, daily active users that hook up a controller, graphs over time and much more.

The data that Valve showed for games that weren't named, clearly showed that the Xbox Controller was always top of the list. Not surprising though and I doubt anyone will be shocked by that.

The big example is below to save you a click if you just want to see quickly (click it to enlarge): 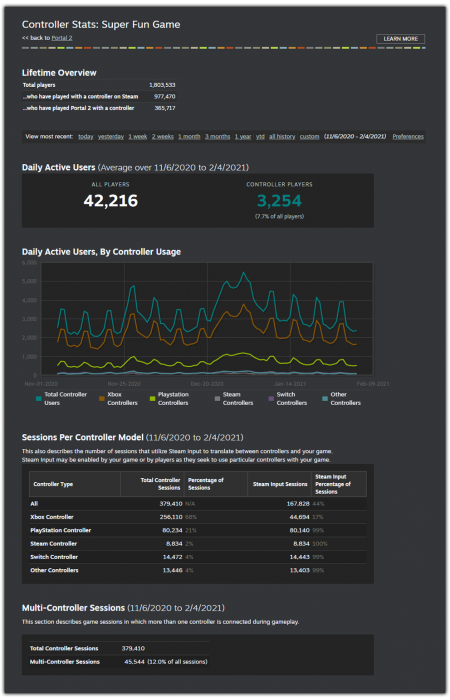 Seems like the data has surprised even the folks at Valve, who mentioned that "a lot of players like to play a large cross section of games on Steam with a controller – which is something many people, including those of us at Valve, find a bit surprising".

Nowadays on Steam, if a game can support Steam Input it ends up getting access to a lot of hardware support. As Valve adds support for more, developers pretty much get it free with Steam Input. There's also Gamepad Emulation which is the more basic form of it. For more details see the info here.

einherjar 24 Feb, 2021
I rarely use controllers.
I tried Valheim with controller, but I was not satisfied and went back to MK.

But some game are nice to play with controller, so having the freedom of choice is always good :-)

Quoting: einherjarI rarely use controllers.
I tried Valheim with controller, but I was not satisfied and went back to MK.

But some game are nice to play with controller, so having the freedom of choice is always good :-)

I find myself wanting more controller enabled games, mostly because I sit for 10-14 hours a day typing away and wiggling a mouse doing work... I want to be able to lay way back in comfort with a controller in hand to play some games. (or in the case of VR, standing with controllers and punching the living shit out of enemies with the Index controllers).
7 Likes, Who?

[email protected] 24 Feb, 2021
View PC info
What upsets me is that some developers just ignore the gamepad crowd, like, out of spite. Who thinks is a good idea to support a gamepad in the game, but not in the menus? Luckily that is disappearing, but 10 years ago it was not uncommon. To this day you, can still see games being launched with partial support for controllers.

I can see that supporting more than a type of input can be time consuming for a developer, since fine tuning controls is not a easy task, and it can make or break a game. For example, the other day a guy was complaining that the defaults of Cyber Shadow, a hardcore "Ninja Gaiden" lookalike, was annoying in the keyboard. I can totally see why the developer not even bothered too much with it, because he thought nobody is playing it seriously that way, but there are always someone.

In the end, lets not be That Guy® that thinks "if I do (like, want, despise, etc) it, everybody else does". Is not productive, and will leave you with a very narrow view of the world.
1 Likes, Who?

lectrode 24 Feb, 2021
View PC info
I use a PS4 controller for pretty much all games I play, including ones normally keyboard and mouse only (using qjoypad ).

Having grown up playing games on consoles, the availability of playing those same games on PC in a similar manner was key to transitioning not only myself but others to gaming on Linux.

IMHO, if I'm not using a controller, it's not as relaxing - which is one of the main reasons I game to begin with. Unwind before hitting the hay. All the naysayers can pry my controller from my cold dead hands :p
1 Likes, Who?

Quoting: lectrodeIMHO, if I'm not using a controller, it's not as relaxing - which is one of the main reasons I game to begin with. Unwind before hitting the hay. All the naysayers can pry my controller from my cold dead hands :p

Can't kick back on the couch with KB&M. Some games are better suited for KBM, like those of a classic/isometric RPG format, and some just "feels" better with KBM, but most "mainstream" games are more often than not made with a gamepad in mind (and thus have had their UI mangled to accomodate this).

This fall when I started playing Dragon Age Inquisition (works very well in Wine), I moved my desktop PC out into the living room, hooked it up to the 75" and surround, and have been playing it from the sofa with a DS4. GHaving gamedpads being as simple as Plug and Play is a must.
1 Likes, Who?

It's interesting that Sony is writing their own driver for 5.12 kernel for the DS5 controller. It'll also be interesting to see if people start utilizing the various new features for PC games.

QuoteNowadays on Steam, if a game can support Steam Input it ends up getting access to a lot of hardware support. As Valve adds support for more, developers pretty much get it free with Steam Input.

Does this work only if the game is played on Steam? I mean, if one is to get a game that has Steam Input on GOG or Itch and play it without Steam client, will Steam Input still work or does it depend on the Steam client? Would be great if it's a stand alone library that can run on it's own.
0 Likes

Too bad Valve never really wanted to sell them to anyone. Just like the Steam Link. If they'd actually been easily available for purchase then they would have sold a ton. In Norway, you couldn't really get one outside of Ebay.

Too bad they are discontinued. We desperately need a second version.

The Steam Controller deserves to be wildly successful. Valve just seems pretty meh when they market hardware.
3 Likes, Who?
1/3»
While you're here, please consider supporting GamingOnLinux on: