What happens when Slay the Spire has a baby with DOTA Underlords? We're about to find out in Hadean Tactics. Ready to launch later today into Early Access, Hadean Tactics is a fascinating mash up of roguelite auto-battler, and deck builder. You take on the role of the Inquisitor, aiming to vanquish the six wings of Hell.

Core gameplay follows the DOTA Underlords mechanic of placing your units on a grid-based battlefield, then watching them choose their targets and pound away, dealing damage according to their DPS (damage per second) stat, and special abilities which are powered by mana. All very familiar so far.

What sets Hadean Tactics out from that setting is that the frenetic action is paused every 7 seconds and you’re dropped into a Slay the Spire mechanic. You’re issued with 3 energy and five cards are drawn from your deck. Most cards cost at least one energy to use, and how you play them will affect the ongoing battle when you “end turn”, having played your cards. 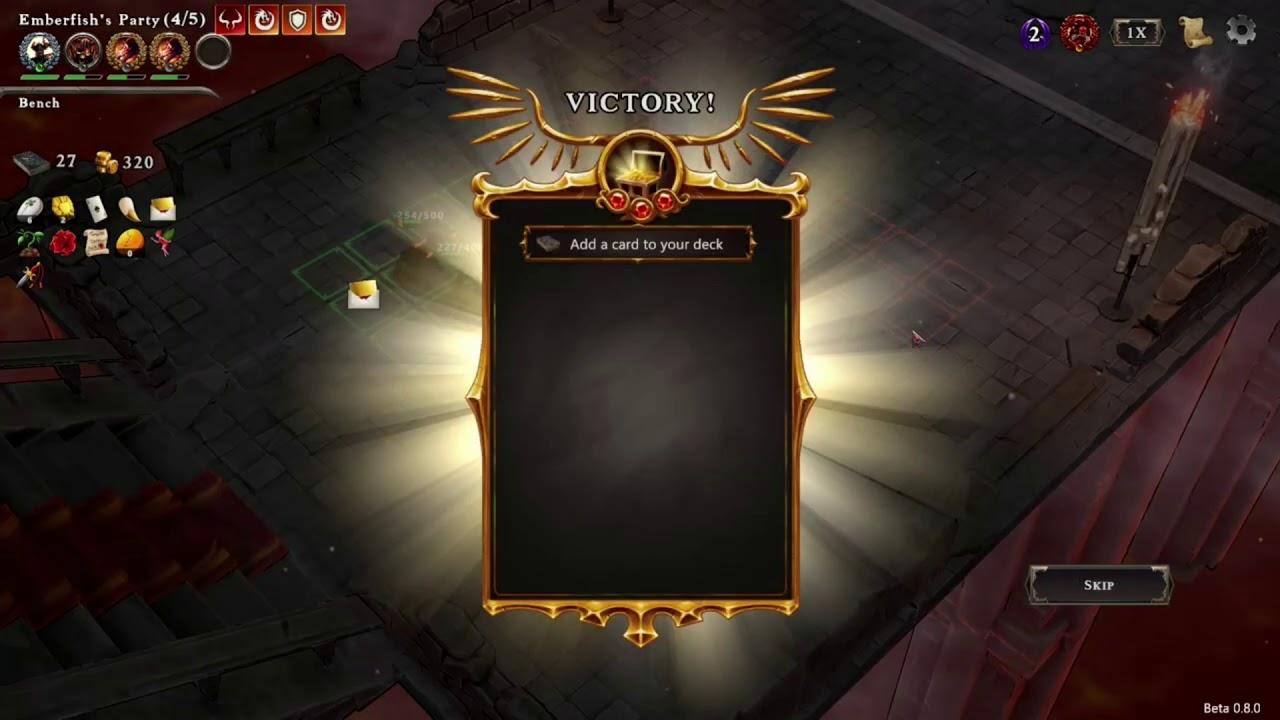 It’s a great compromise between the sheer helplessness you sometimes feel watching a DOTA Underlords round play out, and the sometimes frustratingly slow pace of Slay the Spire. So here, perhaps you’ve noticed one of your units is wailing away at a heavily shielded unit? Play your Armour Breaker card on the enemy, removing its shield and placing a debuff on it that enhances attacks against it for a few seconds. Or perhaps your hero is stacked with shield, but doing barely any damage against his target? Play your Shield Bash card to buff his attacks with his shield value for the next three attacks. 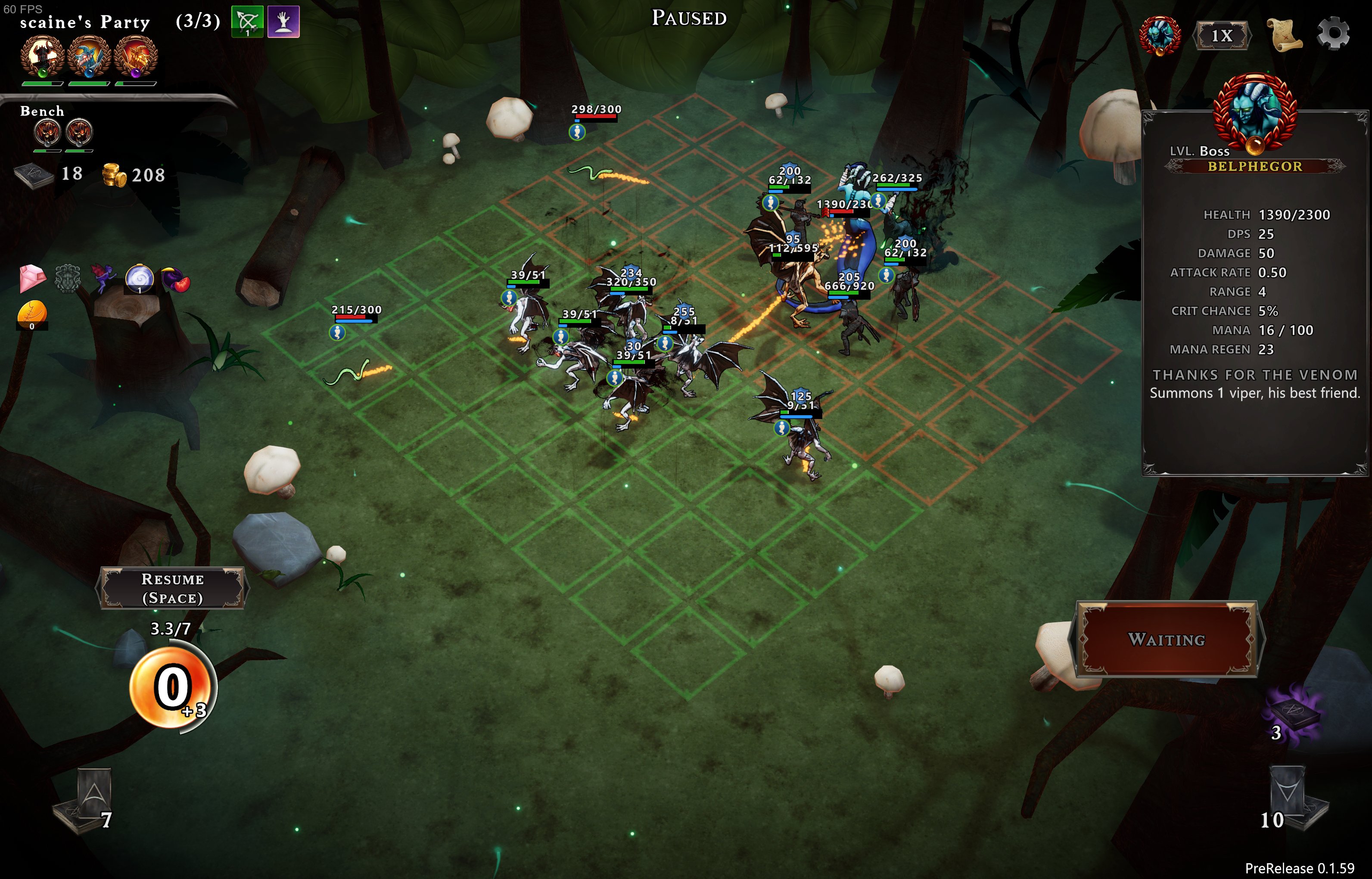 But my favourite cards are those that shape the battlefield entirely. Bash cards will throw enemies back three tiles when hit, and Cross Slide will push an enemy as far as it can go in a direction of your choosing. Better still, colliding enemies together like this can cause huge damage to both units, all the while giving your heroes a chance to refocus their attacks!

After each battle, you’re given an award of gold, and get to choose a card to enhance your deck. More inspiration from Slay the Spire follows, as you get to plot your route to the final boss by choosing a path featuring very familiar encounters, such as fights, bosses, shops, camps, treasure chests and random encounters. Not content with that, the team have also lifted Slay’s relic system into Hadean Tactics and like the original, a good combination of relics can be a game changer. 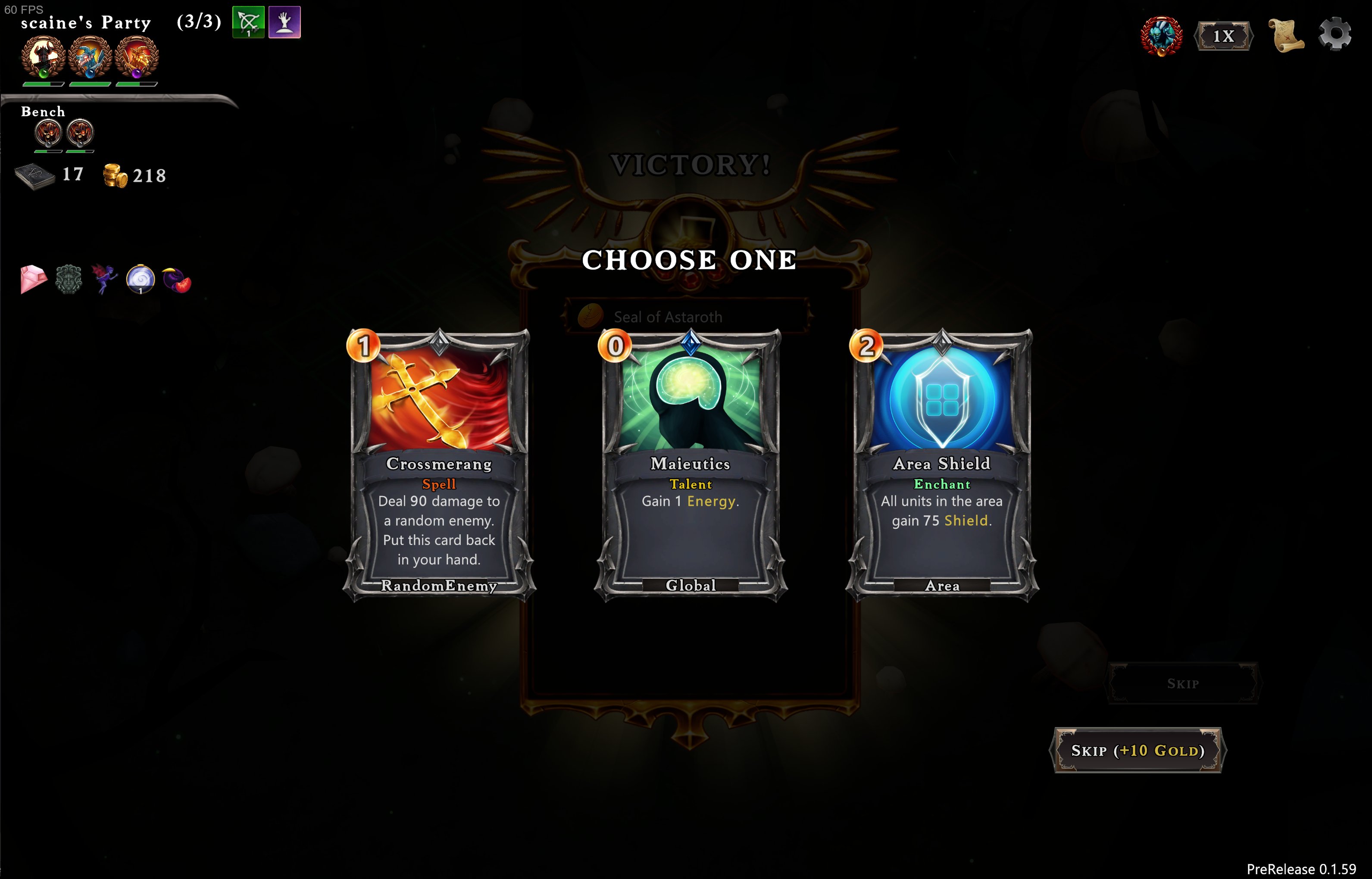 You can also level up your squad, both in capacity, and in the capabilities and hitting power of each squad member. There’s a decent selection of units too - some are melee, some have magic capabilities, some ranged. Some start with melee, and can become ranged! Your Hero, however, will only level up at the end of each floor. Speaking of floors, there are intended to be six wings of hell, but at the moment, the game will end after the third.

The developers, Emberfish, are fairly fresh on the scene. From what I can gather, they’re a duo based in Brazil. Their first game, Guardian of Andra, can be found here [Itch] and surprisingly has a Linux version! 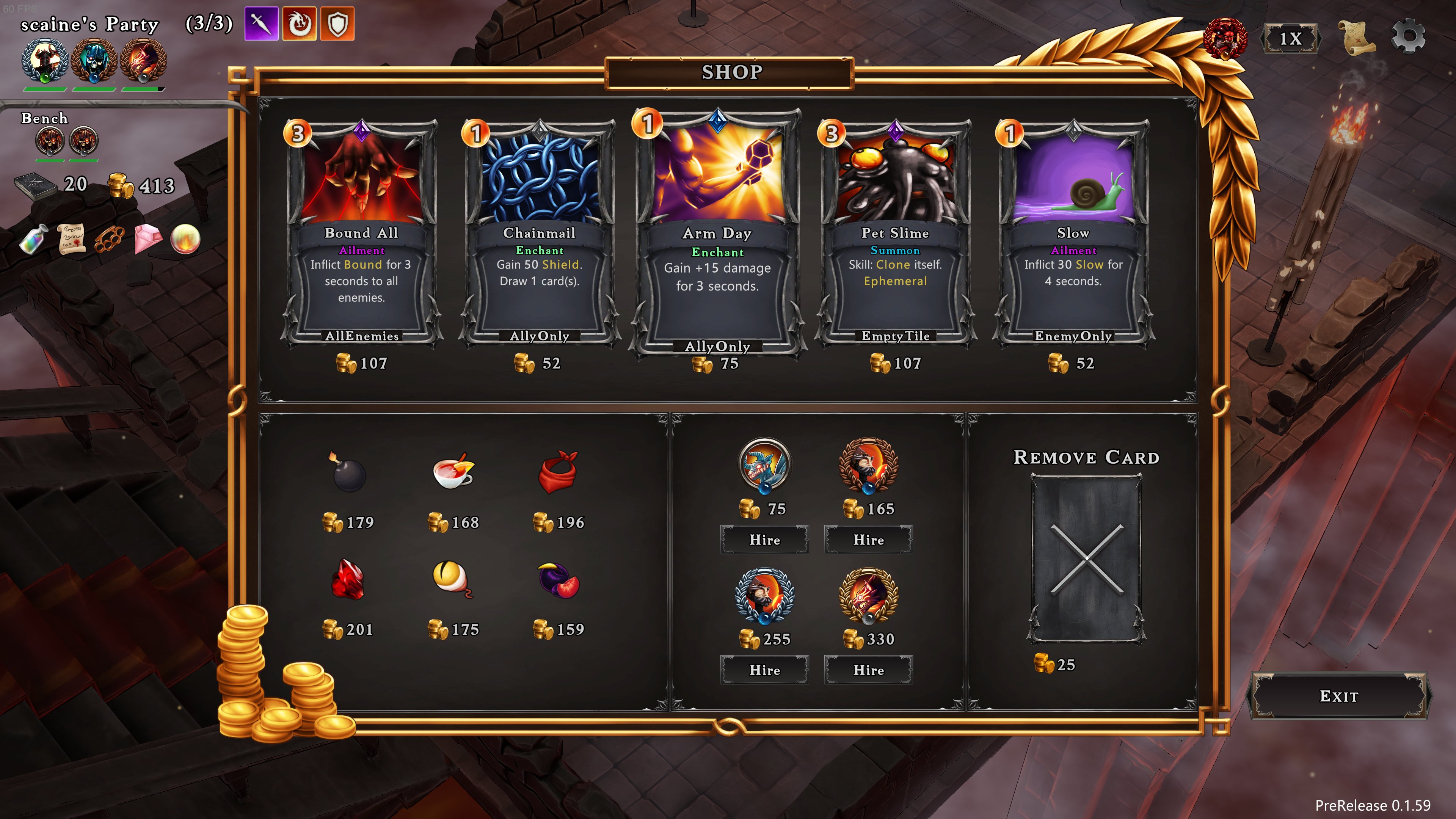 The team intend for the game to be in Early Access for 6 to 8 months. Right now, they have the first hero available, the Inquisitor, and another hinted at “soon”. However, the finished game should feature four heroes, each with unique cards and capabilities and an expanded set of relics, events and units.

I can’t recommend it enough right now. It’s addictive, satisfying, diverse and already features lots of polish. There are a few rough edges, certainly, but nothing fundamental: the battlefield can get a bit cluttered occasionally, and it could probably use a tutorial for the core gameplay mechanic and squad management. But those won’t prevent you having an absolute blast right from the start.

If you’re cautious about Early Access, this is definitely one to wishlist. You can follow it on Steam and it should be price at $17.99 when it releases today.

I also dabble a bit in Python, I do Internet Security for a living and finally, I'm a big fan of Neil Degrasse Tyson. And not just because he has a cool first name.
See more from me
Some you may have missed, popular articles from the last month:
The comments on this article are closed.
2 comments

View PC info
Thanks for the in-depth review Scaine.

This definitely looks like a game I would enjoy. I liked Slay the Spire, but was unable to get by one of the bosses after man, many attempts. I enjoyed DOTA Underlords, but I don't play well with others.

Hadean Tactics looks like it contains the elements of these games I enjoyed and eliminates the aspects I found undesirable/frustrating.
2 Likes, Who?

View PC info
Oh, no, just after I was feeling like I was finally wrapping up Slay the Spire (all characters level Ascension 20, and almost all achievements earned), here comes this game.... I foresee once again having all my spare time locked up...
0 Likes
While you're here, please consider supporting GamingOnLinux on: