Before I begin, I feel I should state that this project is just a bit of fun. The goal is not to build the most powerful retro gaming computer I can, or to engage in any kind of serious analysis or benchmarking. All I want to do is play around with old hardware and software, explore what could be done with Linux back in the day, and maybe learn a thing or two about how far we have come along the way.

Older computing hardware is getting harder and harder to find. What would have been given away just five or ten years ago can now often only be found on websites such as eBay for inflated prices and heavy shipping costs, at least for Canadian buyers like myself. So when I noticed an interesting looking beige box ready to be recycled at my local dump, I did not hesitate to rescue it in order to see what was inside.

Being a dumpster dive, the computer came with no guarantees. The case was a touch filthy from its time in the trash and showed some cosmetic damage, but overall was in good shape outside of the expected yellowing of the plastic. The power supply passed all of its tests, and the computer did power on, albeit with an error code being produced by the PC speaker, a nice looking dynamic cone. There was life in the machine yet.

A number of hints suggested at the computer’s age. The motherboard featured three ISA and four PCI expansion slots along with a single AGP slot, placing its manufacture pretty firmly in the late 1990s. More telling was the configuration of the CPU. Rather than the traditional socket interface seen in most computers, this motherboard boasted a Pentium III 500 Katmai using a Slot 1 connector, an unusual design that narrowed the year down further to 1999 at the earliest.

Researching the error code indicated that the most likely culprit was bad graphics. With a number of older AGP cards on hand to work with, the graphics card was replaced, and after some trial and error the computer achieved a display. The BIOS confirmed that the single stick of 64 MB PC100 memory was detected, and from there started booting Windows 98 from the Fujitsu MPE31022AT 10.25 GB hard drive. The computer seemed to be back in working order. 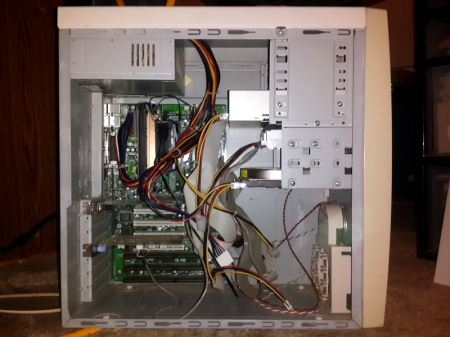 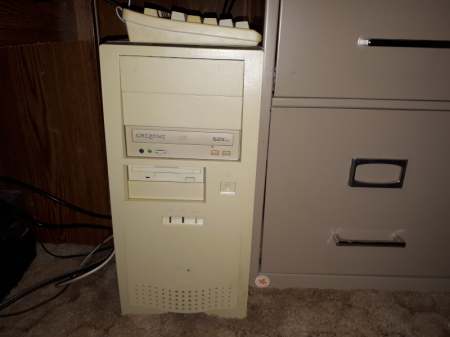 Some small problems remained. The CMOS battery needed to be replaced, and the CPU fan was no longer reliable. This presented a new challenge; being a Slot 1 motherboard there is no proper means of installing a typical CPU fan. Instead, chips that used the SECC2 form factor had cooling mounted directly as part of the cartridge. Due to their novelty SECC2 fans are getting hard to come by, as even most older motherboards use conventional sockets.

Thankfully the front of the cartridge could be removed leaving the heat sink exposed, allowing for the use of a couple of long cable ties to crudely mount a modern case fan in place. An inelegant solution, but one befitting a dumpster computer. In that same spirit I christened the name of the machine: Dianoga, after the creature that attacked Luke Skywalker in the trash compactor of the Death Star in the original Star Wars.

Both the Creative 52X MX CD5233E CD-ROM and included 3.5 inch floppy drive seemed to work, although the CD tray has difficulty ejecting, meaning I have to frequently use a paper clip to trigger the manual eject hole. From there I got my hands on two more sticks of 64 MB PC100 RAM to to fill all three of the motherboard’s memory slots, and my brother gifted me one of his classic Creative Sound Blaster 16 CT4170 sound cards to make use of an ISA slot.

Originally I wanted to use a Samsung SyncMaster 550s 15” CRT monitor I had in storage, but upon powering it on it became clear that the screen was not long for this world. The glass was marred with scratches and there also seemed to be arcing inside the case when powered on. While I do have some other larger CRT monitors I could try, for now I have opted to use an IBM branded LEN L151p LCD which does well with smaller 4:3 screen resolutions.

I decided I would do a fresh install of Windows 98 Second Edition on the original Fujitsu drive, and instead install Red Hat Linux 9 on a separate Hitachi DK23BA-60 6.01GB PATA drive from an old Dell laptop through the use of a converter; the hope being to play most of the games released by Loki Software, from the first true golden age of Linux gaming. With all the other hardware in place, the only decision I had left was choosing a graphics card.

Carrying on in Part 2: Selecting a Graphics Card

Hamish Paul Wilson is a free software developer, game critic, amateur writer, and farm labourer living in rural Alberta, Canada. He is an advocate of both DRM free Linux gaming and the free software movement alongside his other causes, and more information on him can be found at his icculus.org homepage where he lists everything he is currently involved in: http://icculus.org/~hamish
See more from me
Some you may have missed, popular articles from the last month:
The comments on this article are closed.
22 comments
Page: 1/3»

View PC info
AGP slots, haven't used one of those in a while!
I actually can't comment much on the GNU/Linux side of things about gaming back then - I still used Windows at the time - but I quite enjoyed tuxracer on a PentiumIII. One of the first GNU/Linux games I had running, I think with a software renderer originally until I had the graphics card up & running (a 3dfx Banshee at the time).

If you can get Win98SE running on it though, Shadow of the Horned Rat and of course the Mechwarrior 2 series.

G'luck with the project, looking forward to part 2!
0 Likes

View PC info
Although I wouldn't quite call myself a hoarder, I've still got most of my old computers going back for the last 25+ years. Usually I'd keep the PC Case, and upgrade with new motherboard and expansion cards, but there are many times I've kept the entire old machine and built a new one in a new case.

I still own older computers, i.e. ZX Spectrum and Atari ST (I *think* they're in the attic).

Suffice to say, in my study I've just counted 12 PCs (and that is just the tip of the iceberg, i.e. just the newer kit.)
5 Likes, Who?

View PC info
Back when this PC came out, my only experience of Linux was playing about with LiveCDs, such as Mandriva. It wasn't a great desktop back then - manually mounting CDs and USB sticks, and trying to figure out the correct AT&T commands to script up an internet dialler!

Quoting: mirvIf you can get Win98SE running on it though, Shadow of the Horned Rat and of course the Mechwarrior 2 series.

Not going to disclose too much obviously, but the previous owner seemed to have kept the machine around as an Age of Empires II box. He had saved games dated as recently as 2011 on it. My guess would be he just switched over to the Steam version at around that time.

View PC info
i didnt go dumpster diving pre covid i helped a friend clear out an office of it itequipment the drives had been pulled but they were all 4th gen Xeons majority 4 core 8 threaded but there were a fair number of 6/12 as i had the choice between a cash payment or taking some of the stock i took a mix of the two easily made back what he was going to give me with some cleaning and generic 250gb ssds. They can still handling modern gaming just fine plus didnt have to pay for windows licences sold all of them with ubuntu with pre installed wine as retro pc gaming machines i had no returns pays to check corporate clearences out.
0 Likes

View PC info
Cool project, certainly takes me back! I built my very first PC back in 1999, a slot A AMD Athlon K7 system.

Quoting: scaineBack when this PC came out, my only experience of Linux was playing about with LiveCDs, such as Mandriva.

Was it Mandriva back then? Back in those days was when I just got introduced to Linux and Mandrake 8.2 was my first distro. And after some time, Mandrake merged with someone to form Mandriva I think...before they became Mageia or whatever...yea man, definitely been a long time :)
1 Likes, Who?

View PC info
Future Me: You remember back in the 2020's when we needed to use Proton to play Windows games on Linux. Well now, all the games are native Linux, and it is Windows users who need to run LINE to play Linux games.