Valve's Dota themed card game Artifact has now well and truly failed, as they've now stopped the 2.0 redevelopment which is now named Artifact Foundry with the original as Artifact Classic and both now free to play.

In a post titled "The Future of Artifact", Valve mentioned how the player count fell off dramatically and it was pretty much dead shortly after being released. Even though the big 2.0 revamp was far along in development, they've now formally and totally shelved it as they "haven't managed to get the active player numbers to a level that justifies further development at this time". 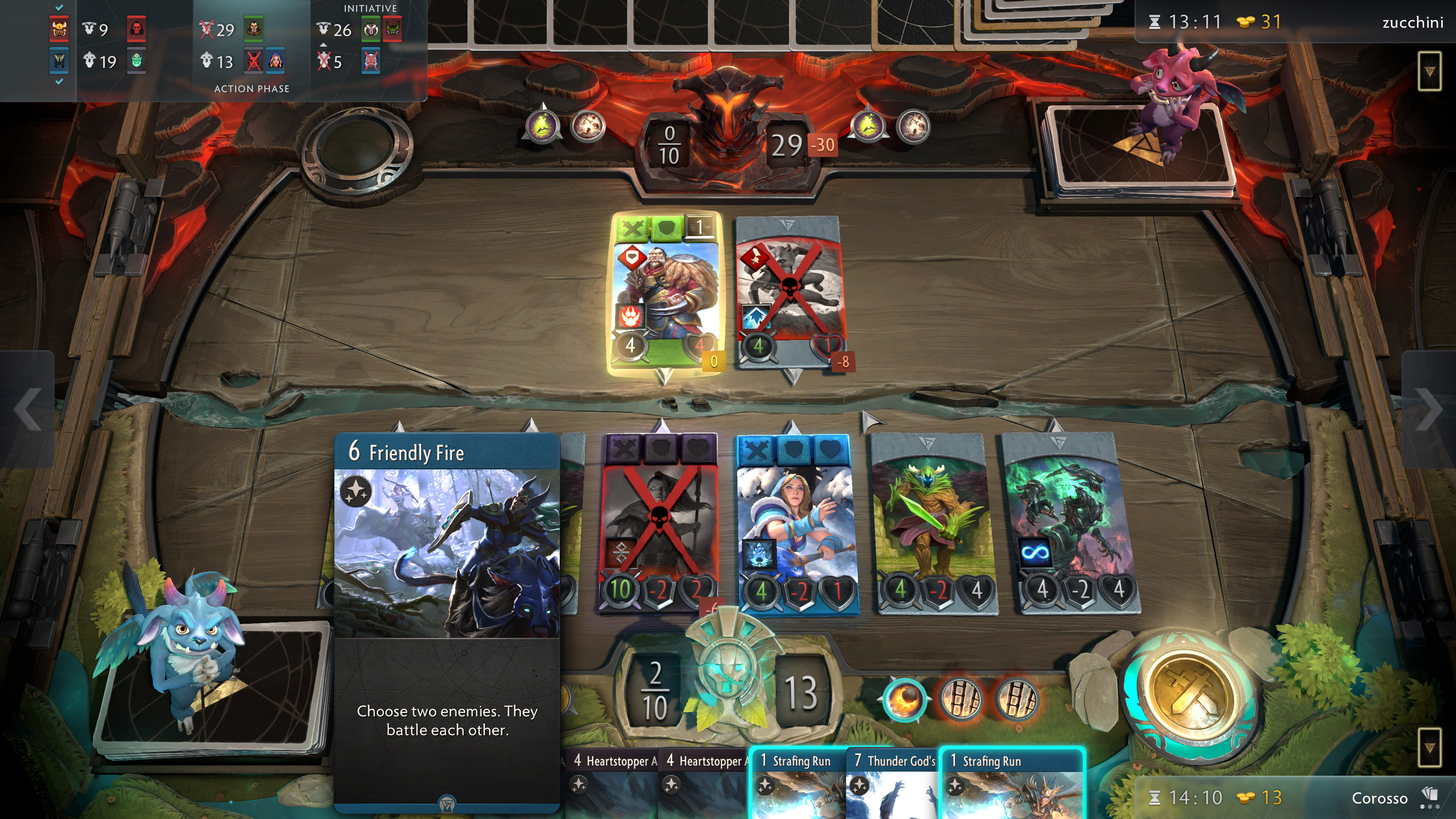 Neither game has micro-transactions, they're both properly free now. However, previous purchases entitle players to Collectors Edition cards. These special cards can be bought and sold on the Steam Market, players who purchased it originally will also be able to earn these cards by playing, free players joining now will not.

There are some major differences between them like how you play across the board. The original, now Artifact Classic you would play each lane across the game in a sequence of turns, but Artifact Foundry has a more simplified take on it where you have the whole board and play in any lane at a time. Each version also has different game modes available.

For a full run-down of the differences between Artifact Classic and Artifact Foundry, see this post.

Both versions are now on the combined Steam store page.

Personally, I am sad to see this. Artifact had fun and engaging gameplay, along with great visuals but it was the monetization model that ultimately killed it. The idea that you had to pay for it, then pay more to play more of it across some of the modes was not good. Perhaps in time now it's free, it might see a reasonable rise in the player count. For now though, Valve has no further plans to update either version.

View PC info
The long haul has finally ended. It's truly sad, the game was fun while it lasted.
0 Likes

View PC info
May it be a lesson to the industry that there are limits to how much you can milk people with shady monetization schemes. It might work for a long time, but eventually people are going to notice that they're getting nickeled and dimed.
11 Likes, Who?

View PC info
I don't really understand this. Hasn't Artifact 2 been in closed beta? How would they expect to get the player count up before they released it or made it an open beta?
I had the Artifact Beta 2 steam page on my wishlist and never saw anything about it becoming available.
3 Likes, Who?

View PC info
I signed up for the closed beta and never got invited.

They chose to not let people play and then said not enough people played.
0 Likes

View PC info
Well, is Valve. They may get back to it in 10 years or so. Time flows differently for them.
0 Likes

Rooster 5 Mar, 2021
View PC info
I completely forgot that this was a thing.
0 Likes

Quoting: questioner9I don't really understand this. Hasn't Artifact 2 been in closed beta? How would they expect to get the player count up before they released it or made it an open beta?
I had the Artifact Beta 2 steam page on my wishlist and never saw anything about it becoming available.

Yeah, their reasoning is more than a little shady.

"We didn't get high player numbers with our opt-in beta that many didn't even know about."
No shit.
I, too, was just waiting for 2.0 to come out to give it a go. As I suspect the vast majority of others were.

IMO, it's probably just a pretext argument for them losing faith either that it will do good once out or losing faith that they can actually fix the problems.

Quoting: RickAndTiredThey chose to not let people play and then said not enough people played.

Probably they got negative feedback and this was the final nail in the coffin.
2 Likes, Who?

View PC info
I can't tell if they are really abandonning the game and just being nice with players who supported it so far, or if it's a devious attempt at attracting more players, only to gradually switch back to a pay-to-win model again once those new players are settled and can be milked more easily...
0 Likes
1/3»
While you're here, please consider supporting GamingOnLinux on: