Total War: ROME REMASTERED from Feral Interactive is out now

Bringing us another quality natively supported game originally known as Rome: Total War, Feral really pulled out all the stops on this one. Some remasters simply give a refreshed look but this is a truly huge revamp of all parts of the game allowing people to relive a favourite and for Linux users - to play through it perhaps for the first time.

The file size got a bit big for their liking though, so you will notice that a free DLC is available right away with the Enhanced Graphics Pack. Not surprising though, because together the installed size comes right up close to 70GB - so if you want the true full experience be sure to have some space ready. 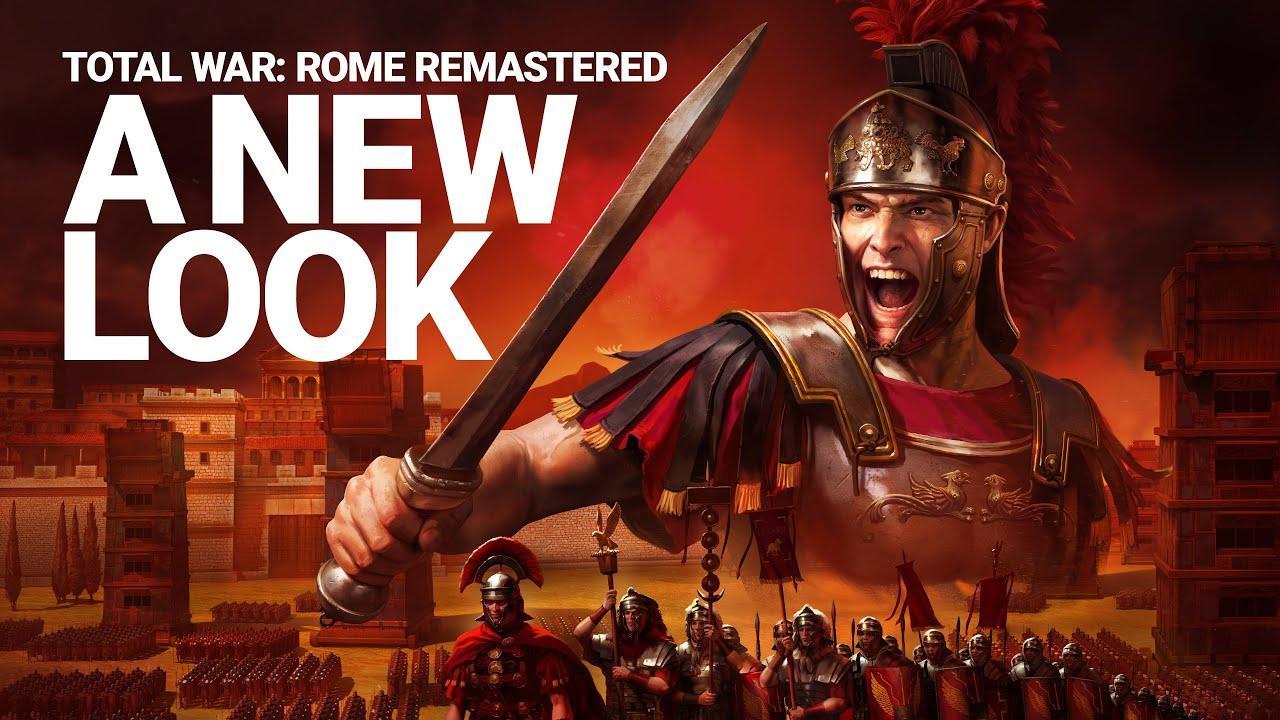 On the subject of drives, you're going to want to put it onto a speedier driver too. On a standard HDD, the campaign loading took a good 3+ minutes. Even once loaded-in on the campaign map a normal HDD it had periods of freeze-loading while sat waiting for it to load while zooming and scrolling. Keeping an SSD or better for this is going to be an absolute must if you want a good experience.

As usual for Feral Interactive games, it includes their fancy launcher. Incredibly stylish too, since it's always nicely branded to each game. It's not just for show though or "yet another launcher", it allows you to tweak some settings before entering and pick between different game packs for Total War: ROME REMASTERED. 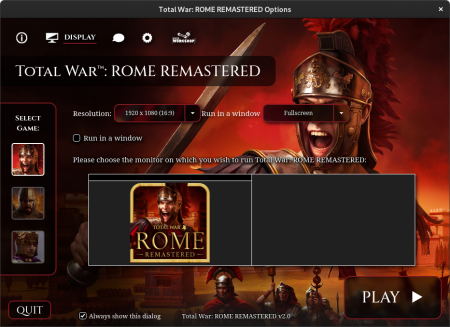 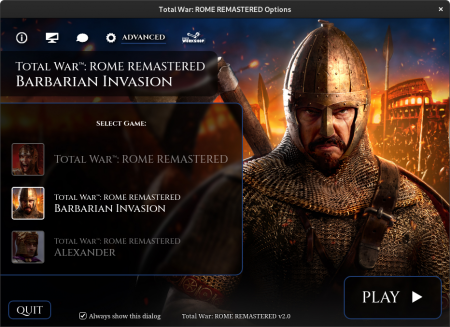 Personally, usually I find it quite difficult to get into Total War titles, they're just not my favourite cup but Total War: ROME REMASTERED is surprisingly easy to understand. There's a reasonable tutorial which allows you to play while learning the ropes, plus your advisor will give you some actually useful tips as you're playing through the first time. Thanks to the intuitive interface and the various enhancements made to the experience it's been quite a joy to be able to play through.

While it is a remaster, the specifications needed are still reasonable in keeping with the original. Running it through on my NVIDIA 1080 with all graphics maxed-out, it's not really a big surprise to see incredibly smooth performance. Feral have nicely tamed the Vulkan API so it purrs along quite happily once you're loaded in. The campaign map has been giving a fantastic 150+ FPS almost at all times, except when switching around between screens and jumping back and forth between the Map Overlay which gives a split-second drop which isn't noticeable unless you have an FPS overlay up. So when it comes to scrolling around the map, absolutely no issues there.

How about the battles though? They're just as smooth on max details, usually hovering somewhere around 100FPS. There's no benchmark mode though as far as I can see to show it off. 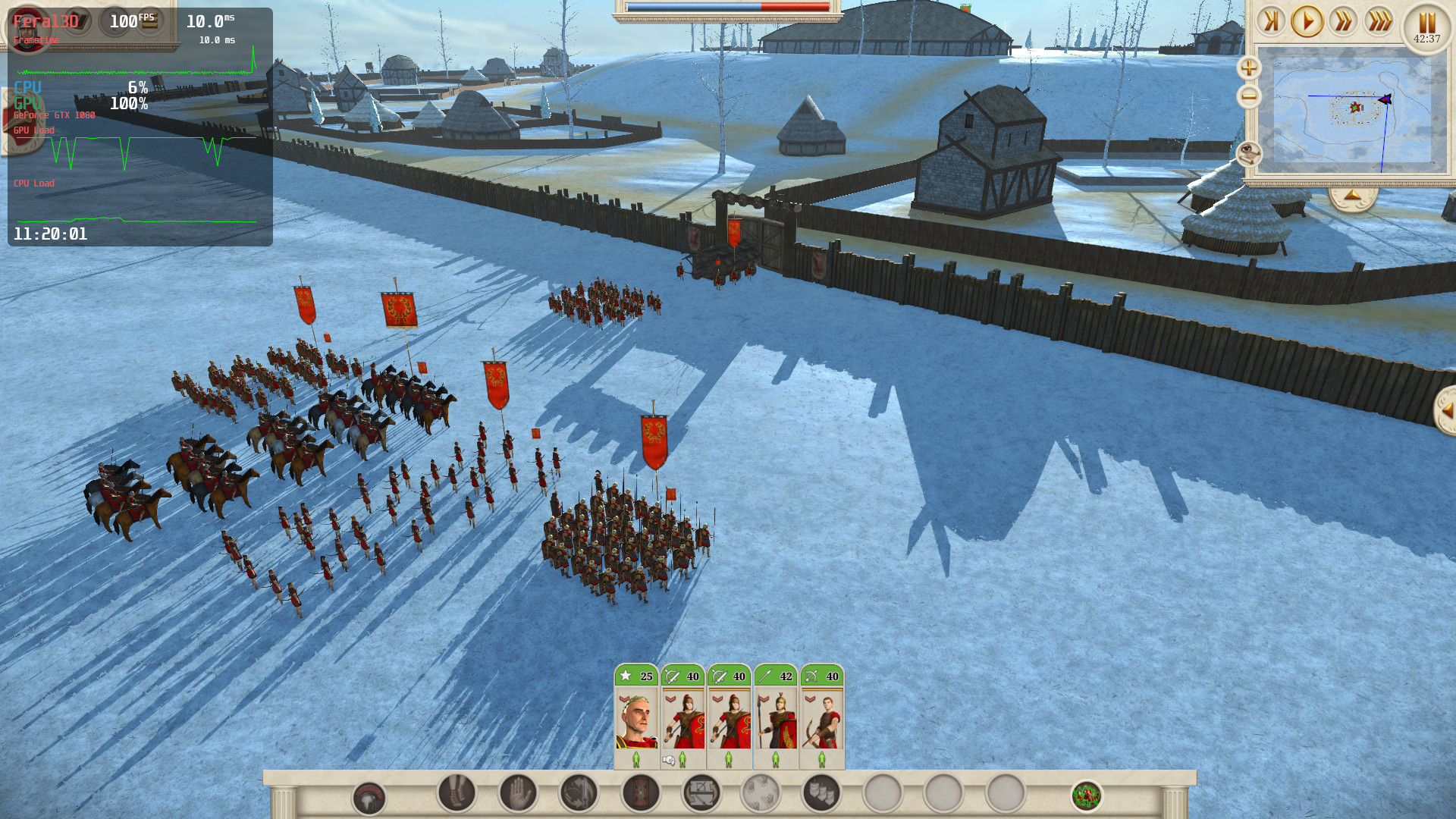 It doesn't like screenshots being taken though, causing an FPS spike every time.

Performance is great then, how is the stability of the Linux version? Well, it is without a doubt one of the smoothest Linux launches I've seen. Absolutely no crashing, no freezing or any other problems. It's click, play and enjoy. It's been a lot of fun sending agents across the map, to infiltrate various towns to spread my influence, only later to come knocking with a battering ram and an army.

A slow game, with each turn taking a while and longer as the game goes on while you wait for all factions to do their thing. Unit movement on the campaign map is also slow but thankfully you can speed that up with a click. You can just tell it's an older game, through all the work Feral put into it there's no getting around the clunky feel of it. Even so, there's definite comfort in it. Total War: ROME REMASTERED does a lot of things right in the gameplay, which some more modern games can end up lacking. Although Total War: ROME REMASTERED is also simplistic in some ways, the effort that was put in with the new UI improvements to help managing your empire seems good.

If you did play the original, you're in for an upgraded nostalgic treat. For everyone else, it makes it super easy to get into. Overall, it's absolutely fantastic. To see Feral Interactive continue to support Linux with some great ports is wonderful. They've done another brilliant job, not that we expected any less from them. It's an easy recommendation to pick up if you love strategy games and previously missed out it due to the original lacking Linux support. It just became one of the best strategy games available on Linux.

Hopefully we can see some more of the older titles get a fresh life like this, as it would certainly be welcome.
Creative Assembly and SEGA would do well to continue with Feral Interactive.

It also requires ~70GB free space total with the Enhanced Graphics but around 45GB for just the base game, and Vulkan support in your GPU is a must. On the driver side you need:

I am the owner of GamingOnLinux. After discovering Linux back in the days of Mandrake in 2003, I constantly came back to check on the progress of Linux until Ubuntu appeared on the scene and it helped me to really love it. You can reach me easily by emailing GamingOnLinux directly.
See more from me
Some you may have missed, popular articles from the last month:
24 comments
Page: 1/3»
Purple Library Guy 29 Apr
Sounds lovely . . . 70 gigs? 70 GIGS?!
6 Likes, Who?

View PC info
Just a heads up that a lot of gamers, Linux and Windows alike, have had issues with the game crashing on startup. Some have even been told to refund it when attempting to receive support.

Quoting: PublicNuisanceJust a heads up that a lot of gamers, Linux and Windows alike, have had issues with the game crashing on startup. Some have even been told to refund it when attempting to receive support.

Haven't played more than an hour but seems to work fine on Arch + Mesa with no issues at all.
0 Likes

View PC info
I figured I'd buy a copy because I love Feral and reports of AMD MESA on Linux are good and sometimes old games are just made well and interesting to try.

I noticed on the Steam download page it reported that it will take 43.95 GB

Quoting: ElectricPrismI noticed on the Steam download page it reported that it will take 43.95 GB and not the 70 GB not sure why (Maybe it's more if you also install the original version too)

As noted in the article, it's up to 70GB if you download the free DLC.
0 Likes

Quoting: TheSHEEEPThat... does look improved, sure, but not like a 70GB game.

I'm a little curious about that too, especially with the reported high FPS reported in the article. I imagine the size might relate to the sheer number of assets?

I'm also curious about the gameplay. How is the balance? Are there still non historical/fantasy units like in the original? How is the enemy tactical AI?

This might be my one exception to purchasing a game this year, so I'm really curious as to some of the improvements and your alls thoughts on it.
0 Likes

Quoting: gojulI get crashes as well (game window will freeze).

Your driver version is too old perhaps?
0 Likes
1/3»
While you're here, please consider supporting GamingOnLinux on: