Not a big fan of permadeath? Good news for you as Caves of Qud, the awesome science fantasy roguelike epic, now has new game modes in Beta.

While the traditional and normal mode of the game remains as permanent death, the current opt-in Beta on Steam now has new options available which should help people explore its truly wonderful and bizarre world. Here's the modes it has now: 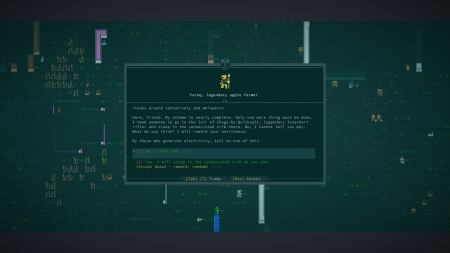 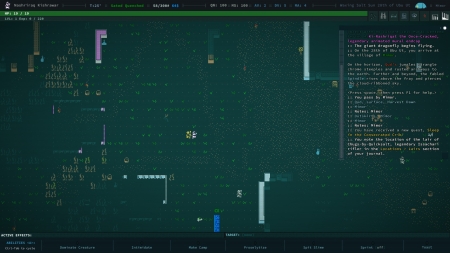 Never played Qud? Here's just some of what to expect from it:

It is absolutely one of the wildest roguelikes I've ever played. What other game can you claim to be a mutated human with a beak that generates corrosive gas? While also having horns, multiple legs and you're cold blooded? Not many other games I bet, probably not any in fact. Caves of Qud is just brilliant. It also has some of the most ridiculous quests I think I've ever seen (see the shots above as just one example).

View PC info
I'm personally more a fan of the way ToME handled this by having a limited lives system, but really any more flexible way to handle death in roguelike is very welcome.
2 Likes, Who?

View PC info
I'll be honest, it's about time they addressed this. For a long time I've seen permadeath being the default as something that drags down Caves of Qud rather than elevates it. I can see it in the daily and weekly challenges, but for the default story mode it comes off more as an artifact of its roguelike roots, which has become a drag as the world and story became bigger and richer.

Permadeath works best when you're able to do quick runs with little turnaround time and you can jump right in. But for a game where character creation takes a while, then you have to explore whatever village you're in to find the quests (even more time investment when it's not Joppa), and on top of that have this huge main questline to follow, it becomes intensely frustrating to suddenly come up against a level five chitinous puma in the first goddamn lair you find that you can neither damage nor escape from (at least not without abusing the AI). And yes, I've run into that situation many times, against as many as three of the damn out-of-depth things at once.

So yeah, I totally support not making new players have to dig into an extensive options menu for a pair of toggles they don't even know exist to turn on ssaves/turn off permadeath. It's been a long time coming, even if they're still pushing permadeath as the default, intended experience.
4 Likes, Who?

denyasis 10 May, 2021
View PC info
Yeah, I think having a checkpoint or save setting might be nice. Especially for a game this epic, although I understand the idea that one shouldn't experience everything in one play through.

I like this game, it reminds me of one of my favorite games, Morrowind, in terms of lore and scope. If only I weren't so bad at it, lol.
1 Likes, Who?

View PC info
Agree with the posters above, this is a good change. I've spent a lot of time with Caves of Qud and I pretty consistently die when I get to the goatmen with guns (if not before). I will enjoy getting to see more of the story and world.
0 Likes
While you're here, please consider supporting GamingOnLinux on: