CodeWeavers, the company the sponsors the Wine project and employs multiple of the developers has announced the release of their CrossOver 21.0 release.

CrossOver is a helpful application that helps you manage installing Windows applications and games across Linux and other platforms (macOS / ChromeOS). If you've heard of or used the likes of Lutris before, it gives you the same idea but focuses directly on Wine. By buying CrossOver you're supporting Wine development directly, plus you're also getting access to their support lines if you need professional help. 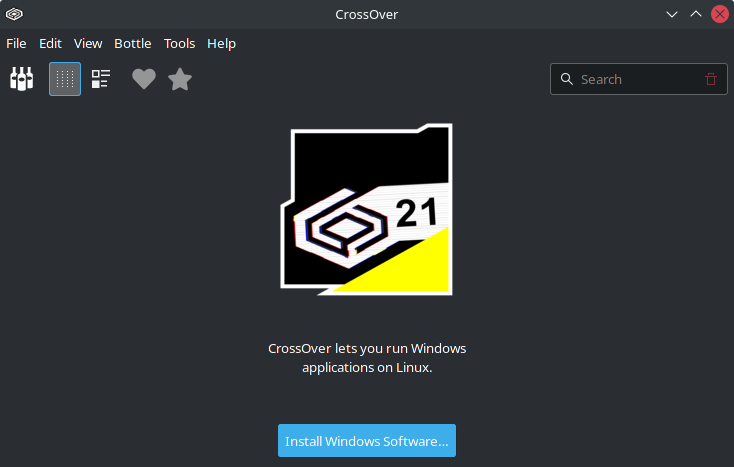 What's new in CrossOver 21.0 then? The biggest part is of course the Wine compatibility layer, which has been bumped up to Wine 6.0. Compared to the previous version having Wine 5.0 it brings multiple thousands of enhancements to the compatibility of games and applications. There's also DXVK version 1.7 to further improve compatibility and performance for Direct3D 9 / 10 / 11 to Vulkan and CrossOver also now ships with Wine Mono which should make the experience even smoother.

Haven't the developers of WINE previously stated that DXVK is a dead-end branch of the development of the dx11-vulkan translator?
0 Likes

View PC info
Is there any advantage to using this over say Lutris for example?
1 Likes, Who?

After some research, i found that CrossOver is focusing on productivity applications (MS Office for example), but Wine(staging) seems to be better for games.
Obviously, it is just a technical point and buying CrossOver is always good to support Wine development !

But i dont know personaly, since CrossOver is a Wine Wrapper (like PlayOnLinux), i think he must be good for games too.

I use a Franken-PlayOnLinux, with some Lutris wine builds, and im pretty happy with it.

Quoting: gradyvuckovicIs there any advantage to using this over say Lutris for example?

Nope. Lutris is a launcher. What you meant is Lutris Wine builds i assume.

Lutris Wine builds are better in terms of game compat, they are based on TKG Wine and protects users from regressions with hotfixes they include to maintain game compat while providing upstream based builds.
1 Likes, Who?

View PC info
I submit this image as proof

Notably that WINEPREFIX's are essentially WINE BOTTLES or Ship in a Bottle -- in the more literal case -- {( App In A Bottle )}.

Their new website is much better than their old one.

Even their new pages like the compatibility database really make WineDB feel like it could benefit from a refresh.

I always felt like their marketing was primarily targeted at Apple users, and since their commercial offering focused in on commercial products I don't use, like Microsoft Office, it wasn't overly appealing.

From using their products in the past I can definitely say the UI was a big improvement and made things much easier. I just wish they put in more effort to get Adobe tools in good condition, but since those are already on MacOS I don't suppose they're a big focus since they're not the bread & butter.

Quoting: yar4eHaven't the developers of WINE previously stated that DXVK is a dead-end branch of the development of the dx11-vulkan translator?

Not a direct answer -- but IIUC WINE is programmed in C and there was a big push-back to not include anything programmed in C++ (I can't recall if that changed), I think the core thinking behind it was that WINE puts a lot of effort into being portable to many platforms -- this allows it to even get ported to things like Android or iOS theoretically (where what Objective C is the standard?) Anyways, The developers of DXVK knew it wasn't perfect when they made it. They leveraged certain trade-offs during the development that made their efforts more successful at hitting their target goals and speed up development. I'm not even sure if they intended for it to be perfect or to ever be useful outside of Linux, obviously while still not perfect they did a damn good job of making sure virtually everything runs and at amazing quality too -- so I think the tradeoffs are negotiable from a Linux Gamer prospective.

Obviously WINE is interested in making sure they have drivers that they can ship across platforms, and since Mac is/was a big part of their income that was a big reason why DXVK remained separate from mainline.

That's the summary of the situation as I understand it from my daily linux reading, I could have details wrong, feel free to revision to add clarity if so.

View PC info
Just to chime in, MS office 2016 is SO smooth now with this version of crossover, and it seems that it's smoother than LibreOffice, also I was able to activate Excel extensions for the first time.
4 Likes, Who?

Quoting: DefaultX-odJust to chime in, MS office 2016 is SO smooth now with this version of crossover, and it seems that it's smoother than LibreOffice, also I was able to activate Excel extensions for the first time.

It always seemed to me that Crossover was for those who really needed to run MS Office or Adobe Photoshop, though I don't know how well it's ever ran Photoshop. I've paid for crossover a few times, for testing and for giving some money to the Wine developers.

Wine/Proton is a good layer, as it still does enable one to use software that even Windows 8+ has issues with.
3 Likes, Who?
TheRiddick 4 Aug, 2021

Quoting: gradyvuckovicIs there any advantage to using this over say Lutris for example?

As was said, CrossOver is primarily for productivity stuff. You can use it to play games but I don't think that Winetricks works on it so in terms of compatibility it is very much "take it or leave it" unless you know how to make a Tie (custom installer) file for your game.

Photoshop as I recall is compatible but only for the older versions. MS Office is generally great, although if you can't install some of the dependencies (mostly 32-bit packages which can be a problem on Manjaro/Arch) then it has some glitches.

Basically it's worth paying if they have the software you want on their database of installer - you can check that on their website. Alternatively, you can treat it as donating to support Wine development, but I consider it more of a business transaction considering how much work they put into the product.

If it's games, then you'd probably be better served with Bottles or Q4Wine which can manage different pfx with easier dll management.
1 Likes, Who?

Quoting: TheRiddickAdobe products work in this? probably have some major performance issues when doing real work such as hw video encoding..

Seemed to me older versions were supported? Would be interesting to see any performance metrics if it did. It isn't like Windows or Mac have the corner market on hardware video encoding.
0 Likes
While you're here, please consider supporting GamingOnLinux on: