It's truly hard to imagine just how much Valve managed to change what PC gaming is thanks to Steam. On September 12 2021, the Steam client celebrated 18 years. Steam is now old enough to buy alcohol in the UK.

Do you remember what Steam originally looked like? I sure do. It was a much simpler time, with none of the fancy tricks Steam does now. There was no Steam Play, no Linux client, no macOS client, no reviews system and just — not much of anything. A few games, a couple of buttons and that was mostly it. This was long before the likes of GOG, Humble, Epic, itch.io, Origin and so on. 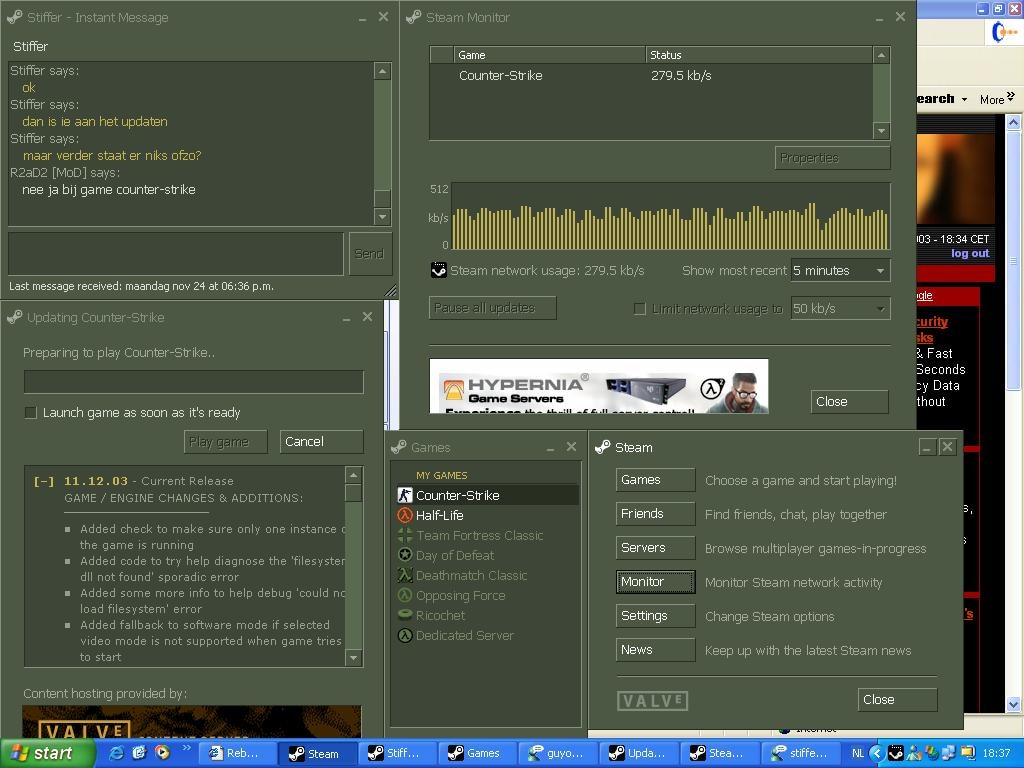 Not only was it a bare-bones client, a lot of people really didn't like it either. This was back in the days where most people went into a real-life game store, picked up a box and took it home to insert a CD and read the manual while it took forever to install. The idea of needing the internet and a client to register and play was just weird. Back then Steam had a bit of a history for being unreliable too, with all sorts of server and login issues.

It wasn't long until Steam was a requirement with Half-Life 2 releasing in 2004, which truly set the stage for PC gaming digital distribution from that point to slowly become the norm. Later in 2005, the first externally developed titles arrived on Steam like Rag Doll Kung Fu but Steam remained a firmly closed system with Valve firmly curating the titles until later in 2012 when Steam Greenlight appeared for indies to submit their games, get votes and eventually (hopefully) get accepted.

Things are vastly different now of course. There's over 51,000 games on Steam and thousands release every year, thanks to Steam Direct allowing developers to pay $100 to get their game listed.

Looking at my own purchase history, looks like Day of Defeat: Source was actually my first purchase on my own account back in 2008. What was yours?

We do often include affiliate links to earn us some pennies. We are currently affiliated with GOG and Humble Store. See more here.
About the author - Liam Dawe
I am the owner of GamingOnLinux. After discovering Linux back in the days of Mandrake in 2003, I constantly came back to check on the progress of Linux until Ubuntu appeared on the scene and it helped me to really love it. You can reach me easily by emailing GamingOnLinux directly.
See more from me
Some you may have missed, popular articles from the last month:
62 comments
Page: 1/7»

View PC info
Fun fact. I didn't know about the existence of Steam until about 2012. I got my first game in 2013 with the release of Steam for Linux, which was Shank 2. A game I still haven't finished.

Wow the Windows XP in the screenshot 😄

Anyway, anyone remembers running the old, classic Steam on Wine to play some Counter Strike? 😉
1 Likes, Who?

View PC info
My story with Steam purchases starts i think in 2007 with the Orange Box.

QuoteThe Orange Box is a bundle that includes five titles from Valve: Half-Life 2; Half-Life 2:Episode 1; Half-Life 2: Episode Two; Team Fortress 2, the sequel to the game that put class-based, multiplayer team warfare on the map; and Portal, the game that blends puzzles, first person action, and adventure gaming to produce an experience like no other.

Current account active since Q3 2007.
Today i have 984 games + several hidden
My account is semi private and i need to turn it public to have more details from https://steamdb.info/

I know i didn’t play a few of them, but not much. I did play (almost) all my games.
Didn’t say to the end... I almost never "finish" a game, even if i play hundreds of hours.
I don’t care about stories most of the time, only gameplay.
2 Likes, Who?

pb 13 Sep, 2021
I'm celebrating my 8th anniversary of discovering Steam today, thanks to Humble Bundle (Steam was required to play Duke Nukem 3D and Shadow Warrior from one of the bundles). It was astonishing to learn it has a Linux client and so many Linux games (Portal, Half-Life etc.).

View PC info
At least the original client had 'buttons'. I really am not a fan of flat UIs!
5 Likes, Who?

Ardje 13 Sep, 2021
View PC info
I am a steam member since 2005.
But my purchase history only goes back to 2012.
Before that I bought physical media.
I think winex/cedega was the reason I did buy half life and forced me to create an account.
1 Likes, Who?

View PC info
I guess it was the Orange Box here too. I mostly bought it to appease my guilty conscience for pirating Half Life 2 some years prior.

(It was a lot easier back then to get the pirated version running in Wine).
1 Likes, Who?


How do you hide games? Asking for a friend ;-).
0 Likes
1/7»
While you're here, please consider supporting GamingOnLinux on: