OBS Studio 27.1 is out with YouTube integration and lots of improvements

OBS Studio is the free and open source recording and livestreaming app used by many content creators and a big new release is now available with YouTube integration.

This means you can now connect up with YouTube instead of supplying a streaming key, and it gives you a bunch of options to help manage YouTube livestreams. Much like the Twitch integration, for Linux you need to be using their official package otherwise you need to supply your own client keys for API interaction (source).

Other new features include an 18-scene multiview option, a feature to allow browser sources limited control over OBS if allowed and an option to draw safe areas in the the preview. 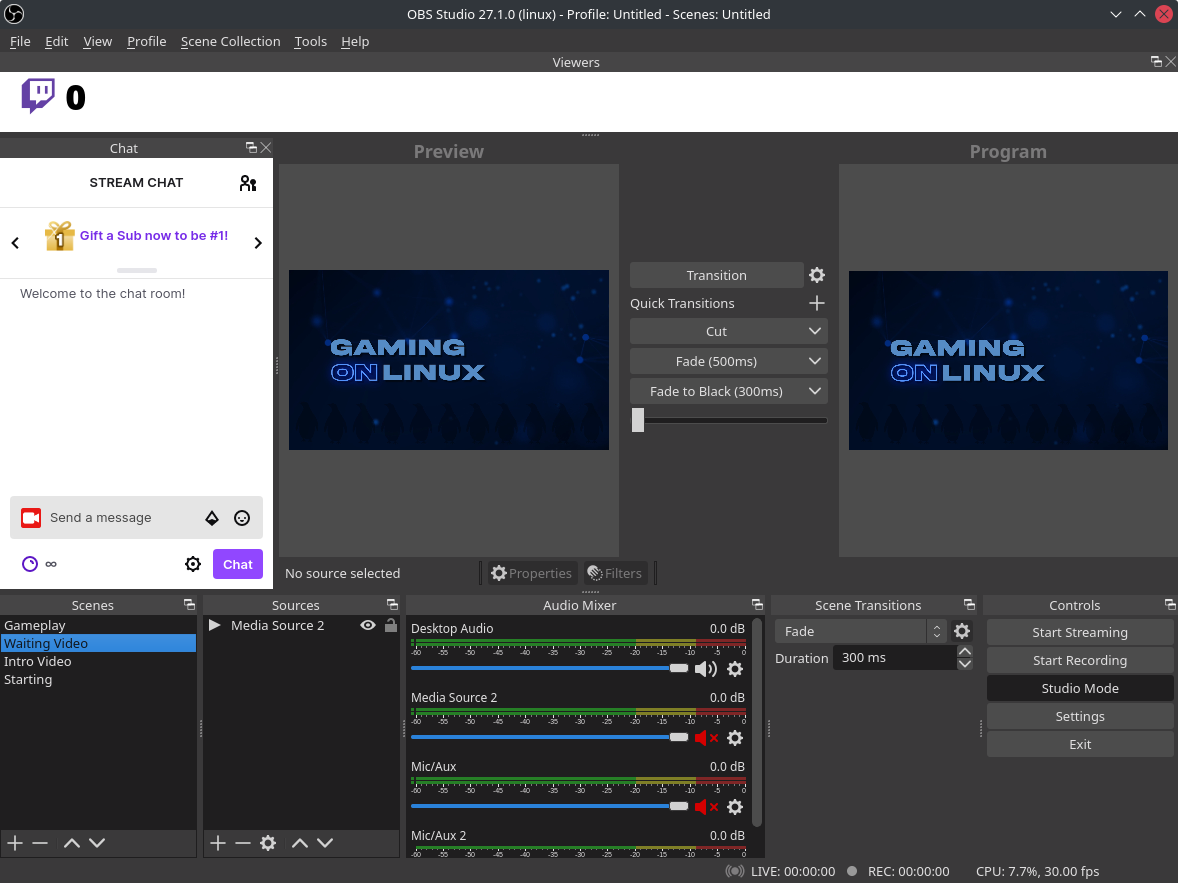 Plenty of tweaks were also made to the software like an optimized media source to reduce CPU usage, hidden sources will have their text dimmed in the source list, there's a new Missing Files Check menu item in the Scene Collections menu, gif files will be animated in the preview window in Studio Mode, drag and drop for scenes & sources was also re-enabled for Linux and Linux also now has CTRL+R to reload browser panels.

Apart from that there's numerous bug fixes like a bug on Linux with Wayland where the cursor capture was out of position.

See the full changelog for more.

We do often include affiliate links to earn us some pennies. We are currently affiliated with GOG and Humble Store. See more here.
About the author - Liam Dawe
I am the owner of GamingOnLinux. After discovering Linux back in the days of Mandrake in 2003, I constantly came back to check on the progress of Linux until Ubuntu appeared on the scene and it helped me to really love it. You can reach me easily by emailing GamingOnLinux directly.
See more from me
Some you may have missed, popular articles from the last month:
11 comments
Page: 1/2»
massatt212 28 Sep, 2021

does it have a browser now?
0 Likes

Most official packages for Linux (i.e. for Arch) don't have the browser plugin built in, you have to build it yourself for that
0 Likes
WizardCM 28 Sep, 2021

Both the official PPA and the Flatpak include the browser source & browser panels.

If your distro does not ship the browser component, it is up to them to fix it - we do not consider OBS Studio "feature complete" if the browser component is missing. However, some distros purposefully do not include CEF/Chromium-based browser components in their package managers - if that is the case for yours, you'll have to build OBS yourself with the browser source included per the build instructions.
6 Likes, Who?
massatt212 28 Sep, 2021

plugins are a pain to use with flatpak
0 Likes

Quoting: WorMzyWhat does it need a browser for?

As said above, you can see in the included screenshot I made of the Twitch chat directly inside the app as a docked browser window :)
1 Likes, Who?
massatt212 28 Sep, 2021

i know their are other ways to install the browser, but it would be nice to catch up to windows, even the encoders are worst on linux, thinking about an NDI setup for streaming
0 Likes

Quoting: massatt212i know their are other ways to install the browser, but it would be nice to catch up to windows, even the encoders are worst on linux, thinking about an NDI setup for streaming

Do you have any examples? I've encoded 4K videos just fine with OBS and haven't run into any performance issues.

This NDI plugin works with Linux:
https://www.newtek.com/blog/tips/dual-pc-streaming-in-linux-using-ndi-instead-of-capture-cards/
1 Likes, Who?

It provides a lot of good features that way, and brings it in closer competition with Streamlabs OBS. Streamlabs introduced a bunch of twitch focused features and integration with donations (a service streamlabs provides) and yet it is one of the worst forks of software I've seen done by a software company from a FOSS project. It may look a bit better but it's just overly "modernized" i.e. information density < looks pretty.

I hope that og OBS can take back some of the users that were lost to Streamlab's fork.
0 Likes
1/2»
While you're here, please consider supporting GamingOnLinux on: