Continued from Part 7: The Arena Eternal

After completing all of the boxed Quake games for Linux, I was left with indecision. So if I could not settle on a single game to play, why not try one hundred? 100 Great Linux Games is a software compilation put out by Canadian publisher Global Star Software. Made for a time of slow internet speeds and limited storage, these kinds of retail collections allowed users to explore hundreds of freeware and shareware titles from the comfort of a single CD-ROM.

Even at their height at around the turn of the millennium the true value of these sets was disputed, with the moniker "shovelware" often being used to mock the tendency of these compilations to value quantity over quality. It also feels an especially odd fit for Linux, where having a wide variety of free software packaged alongside the operating system was already the norm dating back to the earliest Linux distributions.

Indeed, the vast majority of the games included here are free and open source software that were already available in most Linux software repositories. With the exception of the commercial game demos, all this compilation brings to the table is the inclusion of an interactive menu. Written in Python it allows you to select a game, visit its website, display the game's manual page, and then either install the game to the hard drive or, when applicable, run it off the CD-ROM.

This second option is more useful than it sounds if you consider the fact I am only running a six gigabyte hard drive. Being able to play the games without installing them first is a blessing, and almost justifies not just utilizing the system package manager. The compilation itself is RPM based with official support being offered for both Red Hat Linux 6.0 and Caldera OpenLinux 2.3, the latter of which is included in the set as a bonus alongside a variation of the Loki Demo Disc.

The box touts that support for other distributions is possible by compiling the included game source code, an interesting way of trying to make a sales pitch out of a licensing requirement. Thankfully my install of Red Hat Linux 7.3 is close enough to not offer up too many issues as long as you bypass the distribution version check by launching the setup script on the disc with "./setup rh" as root and then the menu system itself with the "./gss-install rh" command. 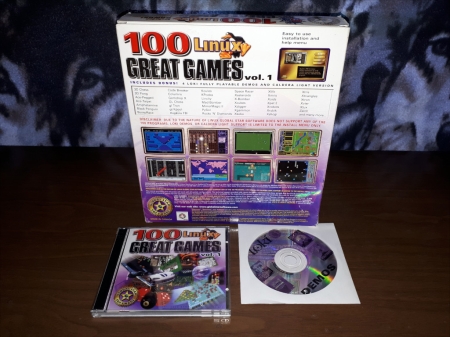 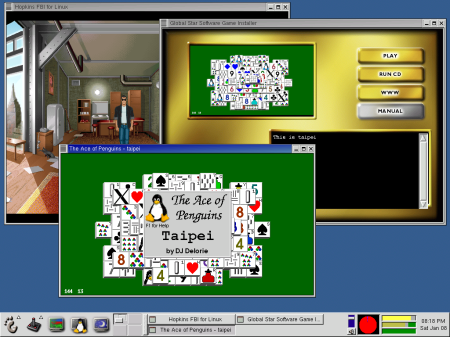 Even then I found that the install buttons would do nothing, although it would recognize if I installed the RPM packages off the disc myself. Most of the games included are straight X11 or even console based, often featuring basic graphics, unusual keybindings, and no sound effects apart from the PC speaker, typically being variations on old Atari or Commodore classics. Given that I will not be going through them all here, but I will highlight a few standouts.

The Ace of Penguins is a lovely hand crafted suite of card and tile games; I have fond memories of playing Taipei as a kid from Knoppix back in the day. Rocks & Diamonds and Mirror Magic by Holger Schemel are notable for their quality graphics and sound effects. XScavenger is a solid take on the game Lode Runner, while Lincity and Freeciv are ambitious remakes of SimCity and Civilization, albeit now heavily outdated. XEvil is a fun fighting game with a history all its own.

By far the game with the most flair however is the demo for the graphic adventure Hopkins FBI, one of the earliest sold Linux titles created by French developer MP Entertainment. I actually managed to get this to work on a more recent release of Fedora some years ago, but the game speed was off making the cat shoot around like a rocket among other things. The full version for Linux has become hard to find, so it is a shame that only the shareware is included here.

This was one of the many disappointments common to these shovelware sets, with them also being notorious for being cheaply produced. That rule also applies here, with the menus often featuring inconsistent text descriptions, mismatched screenshots, and a number of the games refusing to load even after running the setup script. It also appears to be coded to launch websites in Netscape, although this can be overruled with the BROWSER environment variable.

Although 100 Great Linux Games was the only official product from the company to support Linux, Global Star Software also published a wide variety of budget video game releases, some of which happened to come from developers that were also Linux friendly. This would place them in the curious position of releasing a game which, completely inadvertent to them, was for the longest time the only retail version available that could successfully be completed on Linux.

Carrying on in Part 9: Ancient Archaeology

Hamish Paul Wilson is a free software developer, game critic, amateur writer, and farm labourer living in rural Alberta, Canada. He is an advocate of both DRM free Linux gaming and the free software movement alongside his other causes, and more information on him can be found at his icculus.org homepage where he lists everything he is currently involved in: http://icculus.org/~hamish
See more from me
Some you may have missed, popular articles from the last month:
8 comments
gbudny 10 Jan
I like to read articles about classic games for Linux.

Interestingly, Hopkins FBI is a much easier game to finish than a Windows version.
0 Likes

View PC info
Yay, Hamish is back. Interesting read, thanks.
5 Likes, Who?

Of course, by the time I got my hands on the first of them, I had no clue whatsoever what a "Linux" was.

But I still remember some of the games to this day.
Like The Last Eichhof or Raptor.
Curiously, both games seem to also be "available" for Linux, with the first one actually being open-source now.
1 Likes, Who?

View PC info
I was tempted to highlight Maelstrom from this set since it also has higher production values than most and was actually ported over to Linux by Sam Latinga, the father of SDL, but sadly it would not load due to a glibc conflict. That said, it was packaged on the Valhalla install discs by Red Hat and that version does work on Dianoga.

I also found an AUR package for The Ace of Penguins which still works on my more modern Arch Linux computer. The graphics do not scale for larger displays of course, and the help screens do not work, but other than that it is fully playable, and I actually prefer it somewhat to AisleRiot.

"That's right. Whereas in the Linux version you are just shown a map and can select from various destinations, it looks like the PC version forces the player into a first person shooter and makes them battle their way from area to area. I've gotta say that whilst overall the game is fairly good, it's no longer just merely weird.. it's down-right freaky. :) Needless to say, there's every likelihood that we won't be implementing it. We'll likely just use the existing Linux version code, and provide a similiar map image as the Linux version."

Probably, they did the same thing with Hopkins FBI for OS/2 and BeOS.

Raptor is a great game, but sadly a Linux version is not available anymore.

It would be difficult to convince Scott Host or DotEmu to release a Linux version of Raptor:

Original Raptor creator Scott Host is planning on releasing a new Enhanced Version.[10] It will initially be available on Nintendo Switch, but he has plans to bring it to Xbox Series X, PlayStation 5, Android, and iOS. It will not be available on Windows or Mac as DotEmu owns the Windows/Mac rights. However, some of his Patreon patrons will have access to beta versions on Windows and Mac.[11]

Who owns the rights to a Linux version of Raptor?

View PC info
These articles are fantastic, thank you always Hamish, they are a really good look at a history of Linux that I am not super familiar with.
4 Likes, Who?

Phlebiac 11 Jan
View PC info
I think I still have the beta and final releases of Hopkins FBI for OS/2 around somewhere. The final version had some of the "graphic violence" censored, and I do believe it had the "simple map" rather than the FPS.

In between the beta and the final version, the guy who ported it became enamored with the "drag&drop install" method used by macOS, so the other big change was he got rid of the installer. :-p
1 Likes, Who?
gbudny 12 Jan
I found out that someone created the unofficial port of Raptor for Linux:

I remember that in 2004 Linux magazine (they still exist) released a CD that contained 500 games. Back then, I didn't have an internet connection, and I had been using Linux for two months. I bought it, inserted a CD, and I quickly realized that was a collection mostly of open source games. Racer was one of the exceptions. Most of it I couldn't install because they were source packages. It was a disappointing experience.


Last edited by gbudny on 13 January 2022 at 1:08 am UTC
0 Likes
While you're here, please consider supporting GamingOnLinux on: