Here's a game that will be thoroughly interesting to see on a Steam Deck. Caves of Qud is a fantastic science fantasy roguelike epic and the developers have been busy.

In the latest update not only have they added in a ton more content like two minor late-game regions, 48 new Achievements, makeovers to multiple areas, new animations and more — they've also made big improvements to gamepad support.

This new input system isn't fully ready and so it needs be manually enabled in the control settings under the pre-release option, but even so testing with an Xbox pad today it feels pretty great. It's good news for the Steam Deck too, as it's enabled by default if it detects you playing on it and scales things up a bit to be clearer. 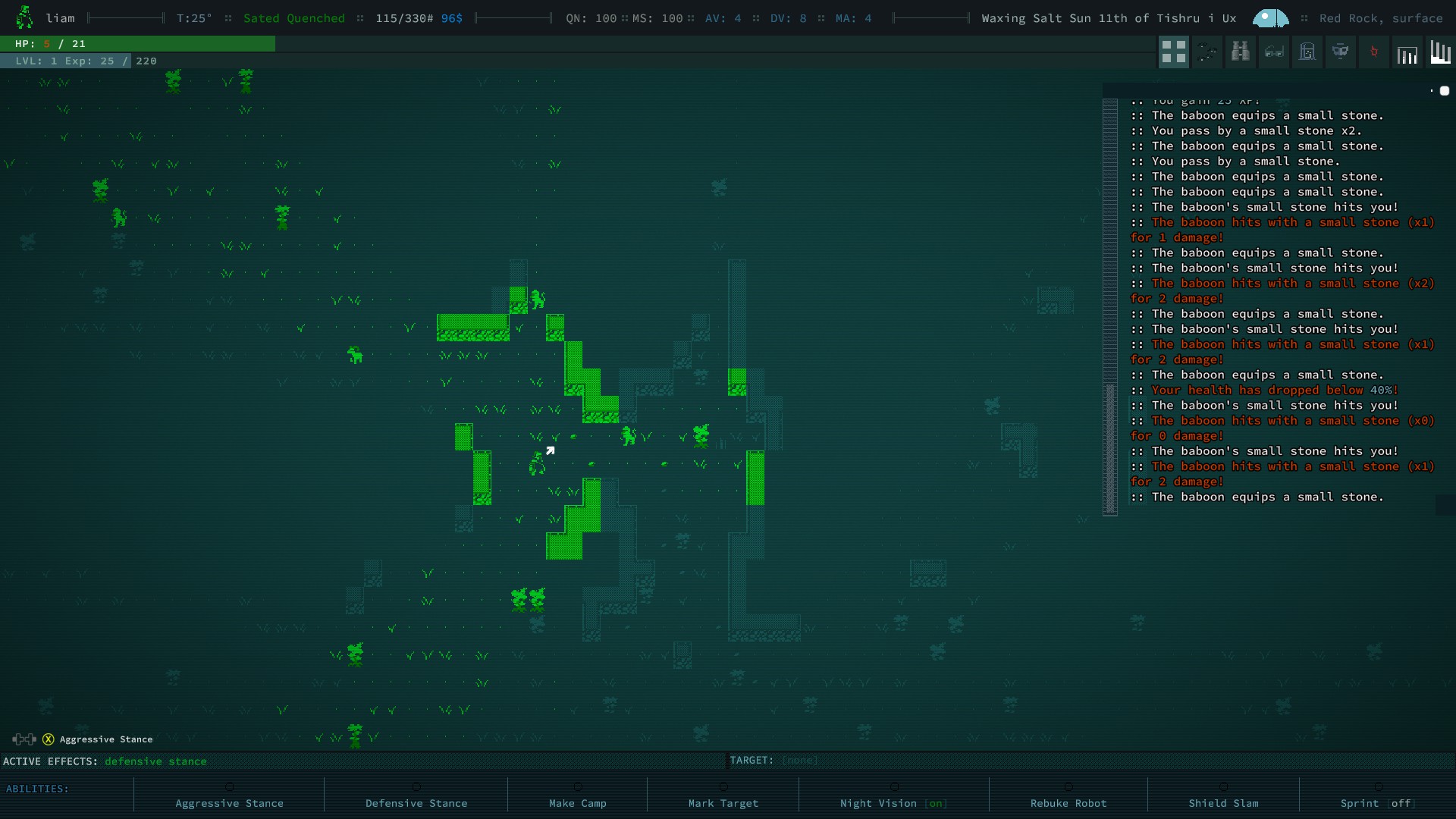 Never thought this would work so well with a gamepad.

You can purchase a copy from GOG, itch.io and Steam.

View PC info
Wow, this is awesome! Really excited to see this, as I love to game on my Switch in bed before I go to sleep, and was hoping I could figure out a control scheme of CoQ specifically for when the deck arrives!

So happy to see this!
2 Likes, Who?
Purple Library Guy 18 Feb
Suddenly I feel like there should be a game about spelunking cows: "Caves of Cud".
5 Likes, Who?

Migwell 19 Feb
I'm pretty sure controller support has been a "prerelease" feature for 6 years at least.
0 Likes
Samsai 19 Feb

View PC info
It is a fun game where you can slice off your own face with an axe and then wear your face on your face, or psionically take over a goat and then have your character be digested by a gelatinous wedge and be doomed to live the rest of your life as a goat. So, basically it's a great experience.
5 Likes, Who?
ssj17vegeta 19 Feb
Discovered this gem by watching the youtuber Ssethstzeentach, and I regret *nothing*.

Don't be afraid by the graphics (or lack of them), it's truly amazing !
0 Likes

Quoting: SamsaiIt is a fun game where you can slice off your own face with an axe and then wear your face on your face, or psionically take over a goat and then have your character be digested by a gelatinous wedge and be doomed to live the rest of your life as a goat. So, basically it's a great experience.

And you can also eat an entire bear.

denyasis 20 Feb
View PC info
This game is awesome. Literally saved my sanity during work travel with no signal.

My first play, I think I got infected/turned into a mushroom? And maybe I shot spores at people, I'm not totally sure, because then I died, probably horrifically. I was very confused, lol. Awesome.

Hopefully someone used my mushroom corpse in a fancy meal.
1 Likes, Who?
Purple Library Guy 20 Feb

Quoting: Samsaiand then have your character be digested by a gelatinous wedge

Wait, they come in shapes other than cube?!
Mind = Blown.
0 Likes

Quoting: SamsaiIt is a fun game where you can slice off your own face with an axe and then wear your face on your face, or psionically take over a goat and then have your character be digested by a gelatinous wedge and be doomed to live the rest of your life as a goat. So, basically it's a great experience.

Your comment made me buy this game. Loving it.

Died maybe 8 times today but it was always my own fault.
1 Likes, Who?
Samsai 20 Feb

Quoting: mZSq7Fq3qsDied maybe 8 times today but it was always my own fault.

Caves of Qud does still occasionally have a problem, where you just end up dying and you didn't really have any reasonable way to avoid it. Stumbling into ruins as a low-level character and being ambushed by a chitinous puma that you can neither run away from or kill or running into a surprise rifle turret around a corner and being instantly killed sucks. On this aspect I think Dungeon Crawl: Stone Soup does better, because it feels like 95% of deaths are due to hubris or panicking whereas CoQ deaths are sometimes super unavoidable unless you grind very hard early on and maintain a paranoid playstyle.

But the Roleplay mode helps immensely and if you want a character to last I recommend it highly. Qud has a ton of content already and permadeath eats a lot of low-level characters, so it's fairly hard to get to the meat and potatoes part of the game with it enabled.
3 Likes, Who?
1/2»
While you're here, please consider supporting GamingOnLinux on: