Sorry Arch (EndeavourOS), it's not working out any more and hello Fedora

There comes a time when everyone has to sit and think about what they use on their PC, especially if you're on Linux. For me, Arch Linux (via EndeavourOS) just wasn't working out any more and so I've moved to Fedora.

While I was reasonably happy with Arch Linux, it's just not stable enough for me personally. It's a very subjective thing of course, and highly dependent on what hardware you use — along with how often you update. For me, it just messed things up a bit too often, and last night was the final straw.

I updated either that day, or the day before, and just before a livestream was due to start, my SteelSeries headset no longer worked. No matter what I tried, following guide after guide about PipeWire, nothing helped. Just this weird and very quiet electrical static noise whenever I tried piping audio to it. Eventually it worked again by some downgrading, plus random hotplugging and testing it on a Windows machine for a sanity check and it started somewhat working again. My Microphone was another issue, at the same time it decided to be ridiculously quiet for no apparent reason I could see so there were wider problems. I had enough, I had work to do and after hours of hair-pulling — hello from Fedora. 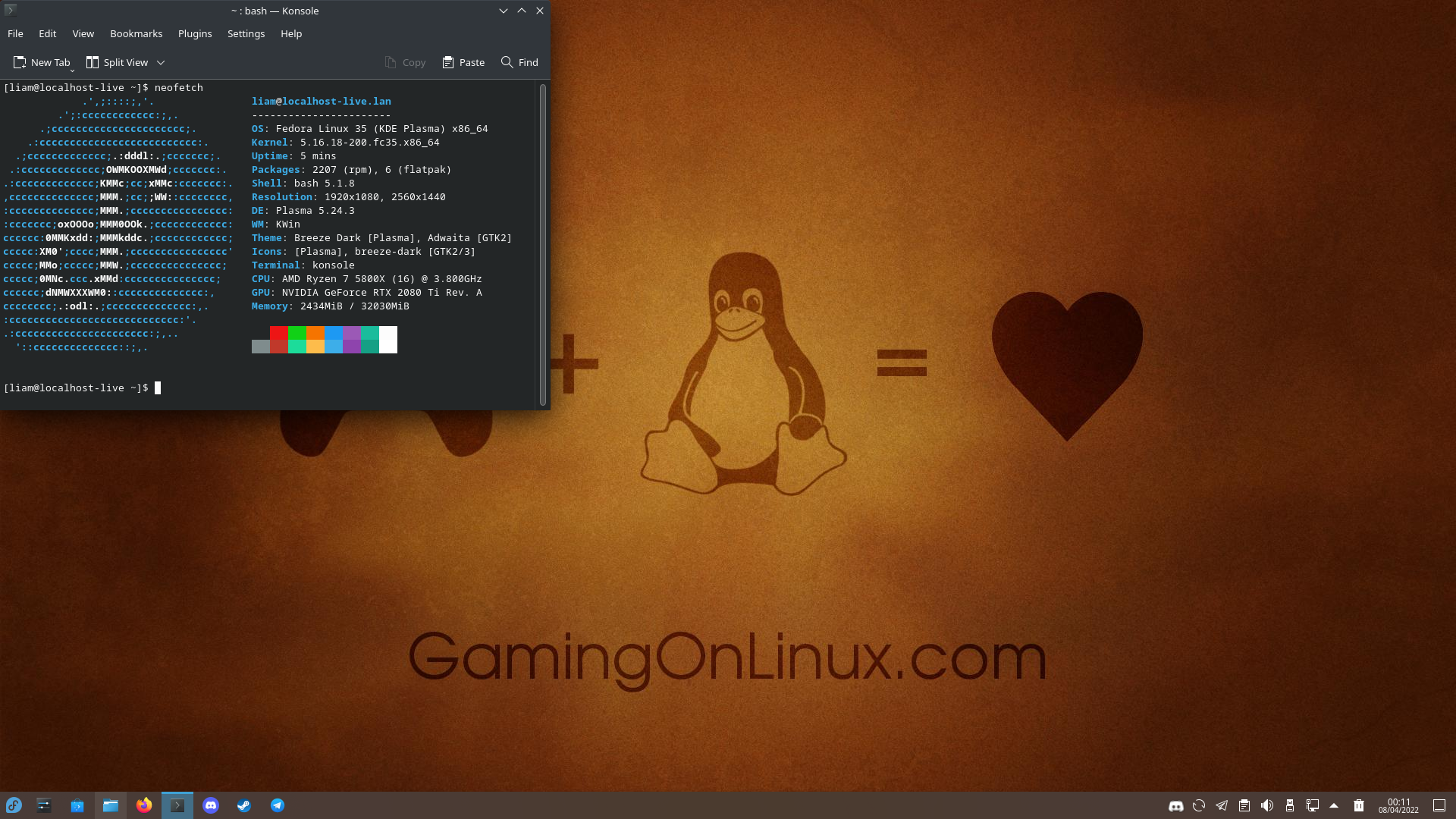 Thankfully, with the likes of Flathub / Flatpak packages and how far along apps like Discover have come along for installing packages and setting things up, there's not a whole lot to learn. It's been a very long time since I used Fedora, and it was one of my first Linux distributions I tried sticking with back when it was "Fedora Core" and wow — it's always surprising to see how far we've come as a platform for doing anything.

Fedora does come with some of its own issues, like NVIDIA drivers being a nuisance to install, which they definitely should improve. If other distributions can do one-click or one-line installs, I'm sure they could do it too. However, it's just another point towards me swapping to AMD when prices settle, or perhaps Intel when Arc properly launches for desktop. I also need to figure out why Dropbox won't load on startup, some little things like that.

Anyway, are you really a Linux nerd if you don't distro-hop at least once a year? Jokes aside, I look forward to seeing why people keep recommending Fedora nowadays as a stable distribution, let's see how long it takes me to break it.

We do often include affiliate links to earn us some pennies. We are currently affiliated with GOG and Humble Store. See more here.
About the author - Liam Dawe
I am the owner of GamingOnLinux. After discovering Linux back in the days of Mandrake in 2003, I constantly came back to check on the progress of Linux until Ubuntu appeared on the scene and it helped me to really love it. You can reach me easily by emailing GamingOnLinux directly.
See more from me
Some you may have missed, popular articles from the last month:
The comments on this article are closed.
180 comments
Page: 1/18»

View PC info
In my experience, Arch is really stable for a rolling distro (although I'd like pacman to be a bit more robust, but it's generally good enough). However, it explicitly requires regular maintenance efforts, and not everyone is willing (or able) to do that.

Which is fine, there are different distributions for people with different needs.


Last edited by dos on 8 April 2022 at 11:15 am UTC
22 Likes, Who?
PinballWizard 8 Apr
I made a similar transition from Gentoo; a hard drive died and I decided rather than the laborious install I would install Ubuntu and call it a day.
6 Likes, Who?

View PC info
When you've had enough of all the other distros breaking for no reason, I'll be here waiting with Debian at the ready. :)


Obviously I'm taking the piss here, people can use whatever they want. It will be interesting to see if Fedora lasts for Liam. I like Debian and Siduction is my preferred distro.

Quoting: dpanterI like Debian and Siduction is my preferred distro.

Back in my day it was called Sidux xD
3 Likes, Who?

View PC info
I recently moved to Fedora myself and I’m now a fan. Ubuntu doesn’t do it for me any more and the Manjaro I was also using was just too much hassle.
1 Likes, Who?

QuoteFedora does come with some of its own issues, like NVIDIA drivers being a nuisance to install, which they definitely should improve. If other distributions can do one-click or one-line installs, I'm sure they could do it too.

It's basically one click if you install Fedora Workstation (GNOME). You basically agree with third-party repos during the first boot, and then search and install nvidia drivers in gnome-software, that's it. Workstation is generally more polished than KDE, which is basically just a high-profile spin.

QuoteHowever, it's just another point towards me swapping to AMD when prices settle, or perhaps Intel when Arc properly launches for desktop.

Yes, definitely go Radeon, you'll not regret it.
12 Likes, Who?

kaktuspalme 8 Apr
View PC info
I'm also considering using Fedora, but less because of Fedora itself more because I would like to try out Gnome instead of Plasma for a while. And I think Fedora has a very vanilla Gnome. But besides that I'm still very happy with Solus Plasma, no reason because of that to switch. Just curiosity.
1 Likes, Who?

Quoting: ripperIt's basically one click if you install Fedora Workstation (GNOME). You basically agree with third-party repos during the first boot, and then search and install nvidia drivers in gnome-software, that's it. Workstation is generally more polished than KDE, which is basically just a high-profile spin.

Huh, good to know, would be nice if they did that small tweak on the KDE spin then, it would solve many troubles I had on the initial install trying to set it up.
3 Likes, Who?
Vintage 8 Apr
Similar path: was using Arch and then Manjaro, now running Fedora. Fewer headaches now.
0 Likes
1/18»
While you're here, please consider supporting GamingOnLinux on: