System76 has today released the latest version of their own Linux distribution, with Pop!_OS 22.04 LTS.

The basics are that they've rebased on top of Ubuntu 22.04 for their packaging, with it being an LTS it's supported for 5 years with updates. Also included is the more up to date Linux Kernel 5.16.19 at release (and they do regular updates), Mesa 22 drivers and GNOME 42 with their COSMIC interface. Plenty more tweaks are included with this release too, so here's a quick run-down.

Automatic updates are available in the new OS Upgrade & Recovery panel in Settings, allowing you to set what time and day you want them to happen. Notifications for updates are also now shown weekly, they said it's to "reduce distractions" but you can change that frequency too. 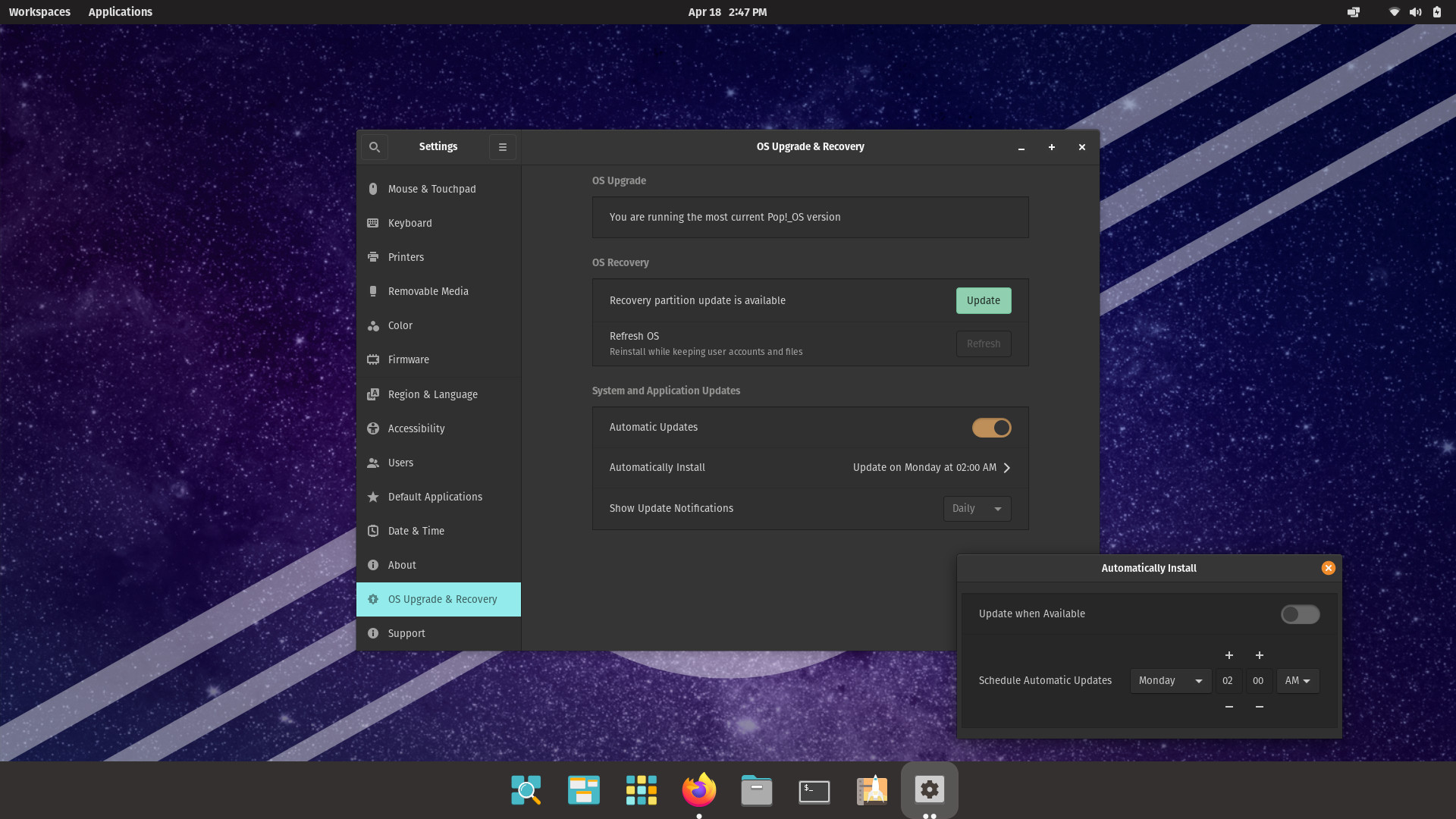 The settings menu also has a new Support panel, giving you various options to get help from articles to support chat. You can change what background you want between light and dark modes, better performance with their newer System76 Scheduler — they said this "optimizes performance by directing resources to the window in focus" which should help gaming. PipeWire is now the default for audio too, so you get the latest and greatest way to handle it all on Linux, something I am a big fan of.

Pop!_Shop, their software store, saw plenty of upgrades too including:

Various other improvements include better multi-monitor support with the workspaces view, a fixed layout on HiDPI displays and increased performance.

View PC info
Ubuntu how it was supposed to be.
1 Likes, Who?
mr-victory 25 Apr
View PC info
Isn't it a bit fast to release, right after Ubuntu release? I'd expect waiting at least 20 days.
2 Likes, Who?

View PC info
The translations to other languages are really bad on Pop. If only there was an easy way to contribute. This issue has been raised many times. Not everyone speak English automatic.
0 Likes

They only ones I've ever heard of or seen are those things you physically stick to the display... But I don't know why you'd need software support for that, so obviously they're referring to something else here.

And I've upgraded, under a "clean" installation with Snap nowhere to be found! 😀

Oh, and I love the new 'power profiles'... Not only do they make it super-easy to quickly change a variety of settings for various usage scenarios, but they seem to make an awfully big difference in how long the usage times on my laptop are (even if, under the default settings, it does make my laptop a little difficult to see under indirect sunlight)!

Having left Ubuntu after 18 years though, it's gonna take me a day or two to get used to the little "quirks" which are unique to Pop!_OS (such as the default keyboard shortcut for Terminal, which is "super" + T under Pop!_OS).

Definitely loving it (Pop!_OS) though, and I'm already considering it a big upgrade from Ubuntu 20.04 LTS... Hopefully I'll say the same once the so-called "honeymoon period" is over.

So unlike Ubuntu, Pop!_OS stuck with X11 for this 'LTS' release (Ubuntu went with Wayland as the default for AMD users and in a future update in the near future, it will also be the default for NVIDIA users)...

The windowing system as I understand it, is the part that actually "draws" everything on the screen under Linux-based operating systems - but I don't understand the advantage of one over the other.

Out of curiosity, what is the main advantage of Wayland over X11 or vice-versa?

Quoting: Cyba.CowboyOut of curiosity, what is the main advantage of Wayland over X11 or vice-versa?

Far as I can tell, right now the two are comparable. There are still some things X11 does better because it's mature and then some and so lots of corner cases have been worked out, little paper cuts taken care of. And, there are some things Wayland does better because X11 was never designed with the scenarios in mind, which can be important if they're relevant to you but quite likely they're not. For instance, in theory I believe Wayland has less trouble with multiple monitors, although I'm not sure it's true in practice yet.

The real reason to switch to Wayland, though, is that the X11 developers are the Wayland developers and they are not interested in continuing to do much with X11, which they consider an obsolete technology that has run its course and can't really deal with modern approaches to displays. I've read some of the technical reasons why and they made sense at the time but they don't stick in my head real well--in the end, if the X11 developers consider X11 obsolete, I'm willing to believe them. Given that, it is probably best if as much of Linux moves over to Wayland as possible, as soon as possible, so things can move forward already.
2 Likes, Who?

Quoting: Purple Library GuyFar as I can tell, right now the two are comparable... ...The real reason to switch to Wayland, though...

Thanks for that... As vague as it was, it answered the question in my eyes. 👍🏼

They only ones I've ever heard of or seen are those things you physically stick to the display... But I don't know why you'd need software support for that, so obviously they're referring to something else here.

Yeah that is odd.

There are actually built in privacy screens in some laptops, HP SureView for example. But it doesn't seem to need any sort of driver support (it's a pure hardware feature).
1 Likes, Who?
Swamper 26 Apr

Quoting: Purple Library GuyFar as I can tell, right now the two are comparable... ...The real reason to switch to Wayland, though...

Thanks for that... As vague as it was, it answered the question in my eyes. 👍🏼

I haven't tried Wayland for gaming myself, but I've read that Xorg still gives the best gaming experience. I understand this correctly, most of what you do in Wayland will be under xWayland. Not all of the Xorg implementations have been done yet, so you might experience some glitches during gaming.

I think that this will go the other way when Wayland has become mature enough. This is a little bit in the future though.

I had to change back to Xorg after upgrading to Ubuntu 22.04. Screen sharing in Microsoft Teams does not work yet in Wayland.
1 Likes, Who?

Can't wait to test out VR with the new scheduler!

I would have thought this was basics 101.
Are System76 the first to put a limit on the size of journald?

Sorry but this is one of my pet hates of SystemD. I remember afternoons trying to work out what was using all my drive space. Will probably get a printout of journalctl --disk-usage to happen on autostart.