Great smaller and casual games for the Steam Deck

While the Steam Deck is a great device for the bigger lot (AAA / AA), what about some quality choices for smaller and more casual experiences? Here's my current favourites, good for a cosy Sunday afternoon.

Okay, casual might perhaps not be the best word. However, my picks here are definitely on the smaller side of the gaming scene but they're really great to pick up and play on the Steam Deck. They're also not overly intense! Just click play and enjoy the ride. Keeping them as close to around £15 or under as I can.

First up, a little video going over each and links below in order: 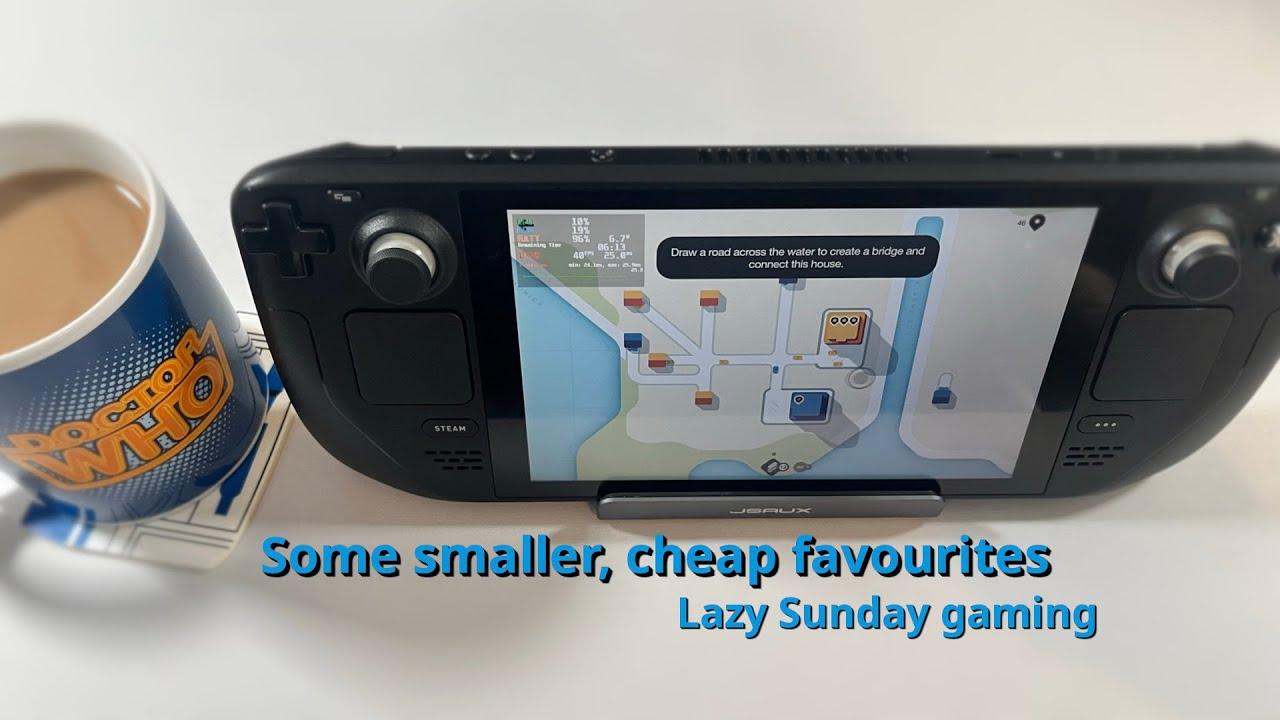 This one was pretty obvious wasn't it? Much like a vampire, it will dig in and suck your life away while the sun goes down. Having a ridiculously cheap price attached is also pretty helpful here, a fantastic entry into gaming on the go.

An online 2D Battle Royale, with jumping tanks. It's like a real-time worms or the classic artillery games. Quite satisfying to jump around and get a few frags in this.

Another that will thoroughly hook you in for many hours. Watch as your hero loops around the screen, while you pause it to equip better weapons and armour and continue on. Then build up your little village, while you get a trickle of backstory.

It's like Space Invaders, with sleek neon graphics and some sick tunes. A classic re-invented for the modern age and a thoroughly great experience.

Another a bit like Vampire Survivors, but with a sentient Potato that carries a lot of weapons as you face off against increasingly large hordes across various rounds.

Small turn-based tactics that will leave you scratching your head. Difficult but great, from the creators of FTL. You control powerful mechs, against waves of creatures crashing through the floor that try to destroy various buildings. Try to think ahead.

A sweet 2D underground mining and crafting game that you can play in online co-op with others. Dig deep to find riches, do a little farming, discover secrets and take down plenty of creatures and bosses.

I couldn't not include this right? Probably one of the most chilled and casual games ever made. Do a whole lot of farming, make some friends, possibly meet your lover and turn an overgrown mess into something beautiful and productive.

Build up a road map for a growing city. One by one you drag roads around to create a network, eventually coming to a rather busy metropolis. Traffic not flowing how you like it? Get redesigning and create the most sleek set of roads you can, help everyone get around.

Probably one of the cleverest puzzle games I've ever played. Combine logic blocks together, to change the rules of each level so that you can reach the flag to win. Turn yourself into things, make everything float or perhaps turn yourself into the flag itself to win.

This one is a bit more expensive than the rest, but also one of the most relaxing game experiences I've personally had on Steam Deck. Make everything so shiny you can see your face in it, get down to your hands and knees and get scrubbing. Actually, don't, just pump some water at everything and hope for the best while you sip your coffee.

What games have you found to be great on the Steam Deck, that don't require a lot of thought that you can just sit back with? Bonus points if your picks are cheap too.

View PC info
I hardly ever use my Steam Deck for big AAA games. That's what my desktop is for. With the big games, I want my ultrawide screen, sub-woofer for good bass and as much power as possible for high fps. With my Steam Deck, I can finally get around to going through my back catalog of indie games and emulate old games. I'm honestly loving it.
6 Likes, Who?
itscalledreality 30 Oct

View PC info
This is a great article! Brotato is a PERFECT game for the Deck.

I'd add Monster Train and Backpack Hero. Both are excellent on the Deck.
2 Likes, Who?

View PC info
I tried Loop Hero on deck, but I couldn't get on with it. The controls were just too awkward for me.
0 Likes

FifteenthPen 30 Oct
View PC info
A Short Hike! A short, but very fun and memorable game that captures the magic of being a kid spending a day in a nice wilderness park with lots of fun stuff to see/do and interesting people to talk to.
6 Likes, Who?

Quoting: FifteenthPenA Short Hike! A short, but very fun and memorable game that captures the magic of being a kid spending a day in a nice wilderness park with lots of fun stuff to see/do and interesting people to talk to.

I had fun with it, and now (today even) my children like to play with it.
Some flying around, some fishing, some motorboat driving... :)
1 Likes, Who?

Para-Gliding 30 Oct
View PC info
I would have add Legend of Keepers to this list. For sale in Steam at the moment (12€ here)
Legend of Keepers
1 Likes, Who?
BingoNightly 31 Oct
River City Ransom: Underground
Fist Puncher
0 Likes

View PC info
One Deck Dungeon is a pretty good fit for the Deck. It's adapted from a physical game, and they optimized the controls to work with the Deck sometime earlier this year (before I bought it). You have one or two party members (fighter, thief, mage, etc.) with some special abilities, and go through a three-level dungeon fighting monsters and environmental hazards by rolling dice and using them to cover boxes on the card for each obstacle. There are a bunch of different abilities that let you convert dice between the three colors (+ black, which can be any color), change the values of dice, etc., making each combat a puzzle as you try to see if you can beat it using the dice you rolled and your abilities. There's a meta-progression element too where your party members gain XP over the course of games that let them start with different abilities, an extra heart, etc.. Sometimes it can get a bit frustrating when you roll a bunch of 1s and 2s, but overall it's a pretty good (non-time-pressured) puzzle game.
0 Likes

View PC info
It's kind of an old one but the western stick-man game West of Loathing looks and plays great on the deck.
2 Likes, Who?
While you're here, please consider supporting GamingOnLinux on: